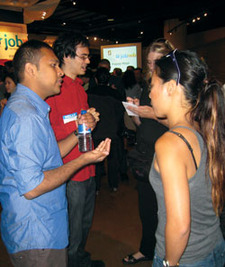 Times are tough all around, not least of all for the tech sector. High unemployment rates (about 11 percent in Silicon Valley) and a dismal job market mean that for every opening there are perhaps hundreds of highly qualified candidates. After the beating investors' stock portfolios have taken, funding for startups has virtually evaporated. But rather than allow innovation to be a casualty of the recession, out-of-work tech professionals are increasingly offering their expertise—on a volunteer basis—to cash-strapped startups in exchange for equity in the companies. To facilitate these matchups, Julie Greenberg, MBA '01, co-founder of Internet employment site Jobnob.com, started hosting informal networking happy hours in the Bay Area. Greenberg says she expected maybe 30 people to show up to the first event, held last spring at a wine bar in San Francisco; 300 people came. In July, she coordinated an event for Stanford alums and had more than 200 people sign up. (She also organized a happy hour for Cal alums, but don't hold that against her.) With the greater flexibility that these nontraditional working arrangements offer, Greenberg thinks the trend may carry forward, even after the economy recovers. She says people are now clamoring for an online, social-networking version of the happy hours.

A 'Breach of Trust' at SLAC

In Tune With the Toxic

The Goods on Us