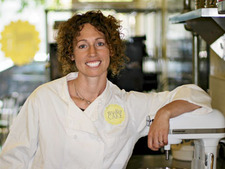 BethAnn Katz Goldberg's second career began with green frosting. In 2001, she fashioned a caterpillar cake for her daughter Elley's first birthday. She didn't even know what fondant was but Goldberg, '94, MS '96, was hooked.

Baking may seem a far cry from working as an engineer at NASA and then at Applied Materials, but Goldberg swears there is a link: "It's all about engineering. It's all about the design process." And when you see her creations, you believe there is an engineer involved. A turtle muddles along with a wedding cake perched on his back. Curious George and the Man in the Yellow Hat ride a circus train to a birthday party. 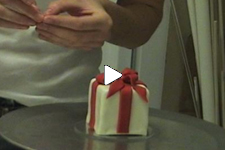 Goldberg started gradually, first crafting cakes for friends from her home kitchen, then taking referrals for customers she didn't know. In 2008, she opened Studio Cake, a "cutie-poo cake shop" in Menlo Park, where one of her masterpieces—a replica of Sesame Street's Big Bird—perches in the window.

Among Studio Cake's fans is Amy Lutz Yotopoulos, '93. She met Goldberg in 1991, when she was the resident adviser in Roble, where Goldberg's husband, Gerson, '94, lived. Yotopoulos has commissioned seven cakes in the past two years, including one modeled on the family cat. "The funny thing is, it looked just like Honey. It was a long-haired orange cake," says Yotopoulos. "It sounds bizarre, but it was great."

Goldberg's reputation is spreading like buttercream in a heat wave. In 2008, she entered a Martha Stewart "Dreamers to Doers" contest—and won a trip to New York and a segment on Stewart's show. In June, Goldberg was featured as a contestant on the Food Network's Food Challenge, baking characters from Shrek. She has filmed a second Challenge about The Simpsons, in which she sculpted Bart and a barrel of candy.

"It is never going to get better for me in my life," she remembers thinking when she saw her cakes on Stewart's home page. "This is winning," she told her kids, Elley, now 9, and Josh, 7. Even in a down economy, her fledgling business is solid. A small cake sells for $350. A sculpted custom creation might cost several thousand. That's a long way from green frosting.

CHRISTINE FOSTER, of Saratoga, Calif., is a Stanford contributing writer.

Kelley O'Hara is serious about soccer and fun.

Tanks, for the Memories