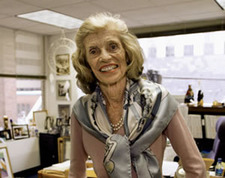 What would possess a girl from a tight, Irish Catholic clan from Massachusetts to break from family tradition and travel all the way to California for a college degree—in 1941?

For Special Olympics founder Eunice Mary Kennedy Shriver, '44, one factor may have been the nuns at Manhattanville College, where she spent two years. When Eunice showed up at a tennis tournament in "white shorts, very respectable," the nuns scolded her. Off she ran to borrow a skirt—which fell to her ankles, mid-match.

A relatively brief time later, Eunice Kennedy was being taught the jitterbug and other current dances at Lagunita, as hashers came and went. "We had the [radio] music going very loud—When they begin the beguine, and all that," says dormmate Dorothy McAdams Wallace, '43, MA '44.

Shriver had been educated at girls' boarding schools in England, where her millionaire father was ambassador to the Court of St. James. Until she came to Stanford, Wallace says, "she really had not had an opportunity to truly be an American girl. This was her first exposure. And we all had a lot of fun with her."

A champion of the mentally disabled and a dynamo in America's most famous political family, Shriver died August 11 in Hyannis, Mass. At 88, she had been in failing health after suffering strokes.

Probably her elder brother Jack played a role in her decision to transfer to Stanford. A year earlier, recalls research archivist Stephen Plotkin of the John F. Kennedy Library in Boston, the future president had spent time at Stanford auditing classes.

And then there were health considerations. From his days in the film industry, paterfamilias Joseph P. Kennedy Sr. was aware of the Golden State's soothing climate. Like her brother Jack, Eunice suffered from Addison's disease and colitis. The fifth of Joe and Rose Kennedy's nine children—known in the family as "Puny Eunie"—also had a tendency toward nervous exhaustion.

This seems paradoxical, considering the enormous accomplishments Eunice Shriver amassed as a lifelong, tireless champion of the mentally disabled. Indeed, Shriver is almost single-handedly credited with lifting the curtain of shame from developmental disability, and with trying to erase the term "retardation" from America's cultural vocabulary. So insistent was she in pushing the concerns of those with special needs that President Kennedy once joked, "Let's give Eunice whatever she wants so I can get on with the business of government."

Her dedication traced from her devotion to her mentally disabled sister, Rosemary. The two were close, sailing together, swimming together and traveling together in Europe. But in 1941, when Rosemary was 23, their father authorized a lobotomy that was intended to soothe rebellious moods in the young woman. Instead Rosemary's condition deteriorated sharply, and she was institutionalized. Her impairment remained a deep family secret until Eunice wrote about Rosemary in a 1962 magazine article. She died in 2005.

Rosemary had excelled at sports, as did Eunice—who came to believe that athletics could help those with intellectual challenges. In 1962, she turned her family's Maryland farm into Camp Shriver, a free summer day program for mentally disabled children. Shriver played in the sandbox with her campers, pitched softballs and jumped in the pool to teach them to swim.

"Nobody else's mother was doing anything like that," her daughter, Maria, said in The Kennedy Women: The Saga of an American Family by Laurence Leamer. "It was always my mother, following her gut, going against the grain."

Seven years later, only weeks after the assassination of her brother, presidential candidate Sen. Robert Kennedy, she launched the first Special Olympics games in Chicago. "Eunice," Chicago Mayor Richard Daley declared at the time, "the world will never be the same."

Today more than 2.5 million people from 150 countries take part in hundreds of Special Olympics programs. Among many honors Shriver received for her advocacy was the nation's highest civilian honor, the Presidential Medal of Freedom, awarded in 1984.

Shriver's Catholicism was profoundly important to her, said Sister Mary Clark, 95, a philosophy professor emerita at Manhattanville. "She was very spirited, but also full of faith."

In a 2007 speech in Boston, Shriver talked about the power of "faith, hope and love" in her life but also credited luck as a major force. She was lucky, she said, to be raised by parents who loved her and "made me believe in possibilities." But she insisted she also had been lucky "to experience the sting of rejection as a woman, being told that the power was not for me" and to have seen "my mother and my sister Rosemary being treated with unbearable rejection." That "awful sting of rejection," she continued, helped her develop the confidence to believe "that I could make a difference in a positive direction."

Shriver was ahead of her time in working for 10 years out of college before marrying in 1953. Graduating with a social science/social thought degree, she worked first for the State Department, then administered a juvenile delinquency project for the Department of Justice. She also worked at a women's prison in West Virginia and at a women's shelter in Chicago.

Her husband R. Sargent Shriver, founding director of the Peace Corps and the 1972 Democratic candidate for vice president, quipped that it took him seven years to persuade Eunice to marry him. Shriver survives her, along with their sons, Robert, Timothy, Mark and Anthony; Maria, who is wife of California Gov. Arnold Schwarzenegger; 19 grandchildren; and her sister Jean Kennedy Smith. Her brother Sen. Edward Kennedy died 14 days after her.

In a statement released upon her death, her family said, "She set out to change the world and to change us, and she did that and more."

See You in the Fashion Pages

Kelley O'Hara is serious about soccer and fun.

The Things He Saw