Why Stanford Is Saying Goodbye to 11 Varsity Sports

TOUGH CALL: Among the varsity sports that will be discontinued at the end of the ’20–21 academic year is field hockey. Photo: David Gonzales, ’93/Stanford Athletics

Editor's Note: Read an update on this story here.

For decades, Stanford has occupied an exalted place in Division I athletics, combining sustained excellence with a breadth of offerings that is virtually unrivaled. But the mystique that attaches to such success belies the reality: Stanford is subject to the same gravity that tugs at every other place.

On July 8, that reality became evident when the university announced it would permanently discontinue 11 varsity sports because of rising budget deficits.

In an open letter, Stanford president Marc Tessier-Lavigne, provost Persis Drell and athletics director Bernard Muir acknowledged that the elimination of 11 sports was “heartbreaking” but necessary “to create fiscal stability for Stanford Athletics, and to provide the support we believe is essential for our student-athletes to excel.” Men’s and women’s fencing, synchronized swimming, men’s rowing, lightweight rowing, coed and women’s sailing, squash, men’s volleyball, field hockey and wrestling will cease varsity competition after the 2020–21 academic year. The programs will be allowed to transition to club-sport status.

Muir said in an email interview that although the pandemic has exacerbated the problems, budget shortfalls have been years in the making. “Simply put, the revenue gap between Stanford and the schools we consider to be our peers in intercollegiate athletics has grown considerably over the last decade,” he says, citing television rights deals from which Big Ten and SEC schools receive roughly $20 million more annually than Pac-12 schools. 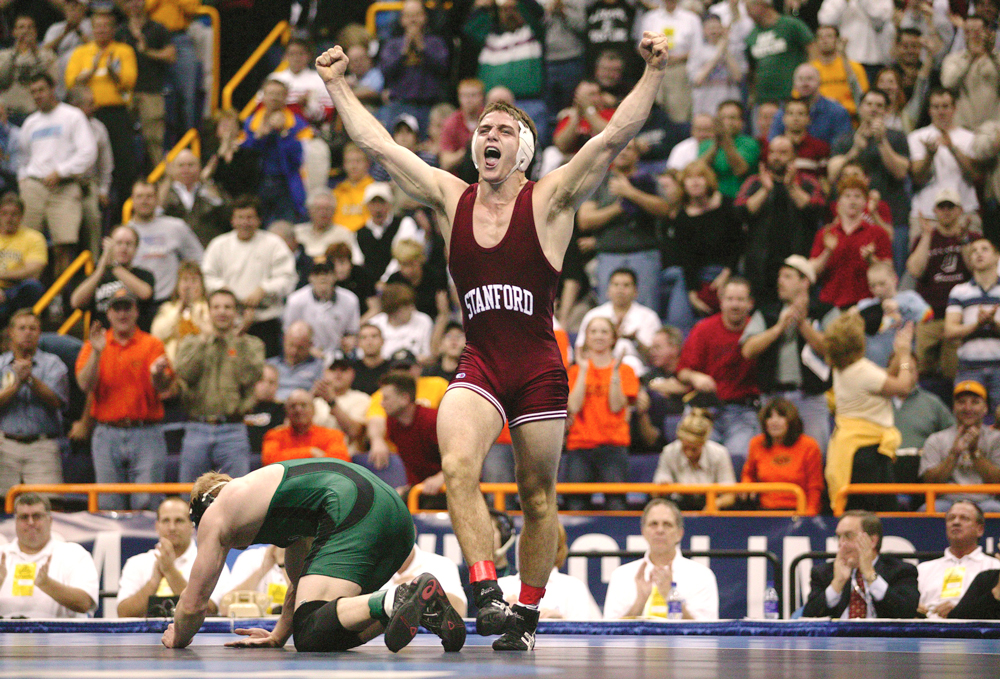 IN THE ROOM: Stanford was one of six institutions competing in the Pac-12 for wrestling. (Photo: David Gonzales, ’93/Stanford Athletics)

“Schools that have tens of millions of dollars more to spend each year, typically on far fewer sports than Stanford has sponsored over the years, have created new standards of care and new expectations in important areas like sports medicine, sport psychology, nutrition, sports science and facilities,” Muir says. “We had to decide whether to continue to provide the best athletics experience in the country or to change course and pursue a new model that de-emphasized competitive excellence. Ultimately, we determined that being excellent in 25 sports was a better option than gradually ceasing to be nationally competitive in 36.”

On average, Division I schools field 18 sports. Even at 25 sports offerings, Stanford has one of the most robust programs in the country. Nine of the 11 discontinued sports are played at fewer than 10 percent of the 350 Division I schools, and six of them do not have NCAA-sponsored national championships. Still, the loss of 11 sports is a stinging blow, especially for those closest to them: 240 student-athletes, 22 coaches, 20 support staff and more than 4,000 alumni.

‘Athletics has generally been a self-sustaining entity on our campus, and we are striving to preserve that model in a time when the university’s budget is under significant stress.’

The affected sports combined have accounted for 20 national championships and 27 Olympic medalists, but the value of the programs goes much deeper, says former lightweight rower Michele Holtkamp, ’20. “I’ve learned countless lessons from the tough losses, the dedication to teammates, the need for near-perfect unity to succeed,” she says. “The commitment that is required to wake up early in the morning for long, grueling workouts cannot easily be learned in other contexts.”

The change requires a particular adjustment for incoming freshmen who chose the Farm in part because they wanted to compete at the Division I level, says men’s volleyball head coach John Kosty. His message to them: “You have an opportunity to go to one of the greatest universities in the world. You should not make a decision at this point to go play volleyball somewhere else.”

Athletics is funded predominantly by a combination of donations, television rights fees, ticket revenue and corporate partnerships. Private giving—endowments that support student-athlete scholarships and coaching positions, as well as annual donations—is the largest single source of support. The next-largest chunk comes from the Pac-12 conference, primarily from revenue received from ESPN and Fox.

With the football season canceled this fall, Muir says, the 2020–21 budget deficit, estimated to be $25 million, could balloon to more than $50 million. 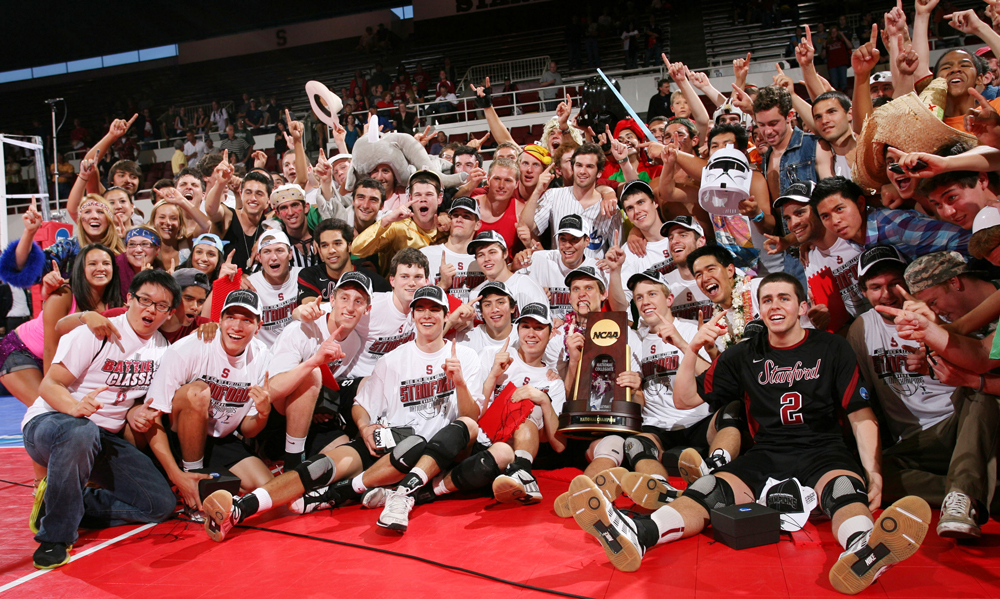 HAPPY TIMES: The men’s volleyball team won two NCAA championships, in 1993 and 2010, and was runner-up three times during its years as a varsity sport. (Photo: David Gonzales, ’93/Stanford Athletics)

One of the frequent questions in comment threads is why Stanford doesn’t simply dip into its endowment to preserve the sports that are being discontinued. Muir says additional university support was not the solution. “Athletics has generally been a self-sustaining entity on our campus, and we are striving to preserve that model in a time when the university’s budget is under significant stress,” he says.

Muir says budget discussions began with cost-cutting measures that didn’t involve discontinuing sports. The executive team and several head coaches, including football coach David Shaw, ’94, and basketball coaches Tara VanDerveer and Jerod Haase, took voluntary pay reductions. There were cutbacks in administrative operations and travel budgets, and, ultimately, 20 support staff were laid off as part of the measure to discontinue 11 sports. Another option that was considered and rejected was to cut funding across all 36 sports, eliminating scholarships and taking other “drastic measures” that would have undermined recruiting and consigned the overall program to a future of mediocrity, according to Muir. That said, he adds, “I know there is no explanation I could provide that would take the pain away from the student-athletes and alumni of these programs.”

Kevin Cool is the former executive editor of Stanford. Email him at stanford.magazine@stanford.edu.

Stanford is working to address urgent imperatives in the country and the world.