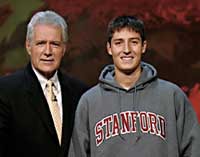 As a kid, Nico Martinez drew Jeopardy! game boards on the backs of paper restaurant placemats and played Alex Trebek while his family answered questions. But it was Martinez in the hot seat this fall as he competed in the final round of television’s Jeopardy! College Championship. The junior political science major emerged victorious, winning $100,000 and the opportunity to compete in the Tournament of Champions. Martinez had to keep the results a secret from Stanford Quiz Bowl teammates, family and Sigma Alpha Epsilon brothers, with whom he watched the final episode November 18. “It was very hard,” Martinez said. “But I was good.” He plans to spend some of his winnings on a trip to Brazil, but says he’ll put most of it in savings. When asked what the Final Jeopardy! answer was, the man with the photographic memory had no problem remembering: Lima. The category, world capitals, is a favorite of his: he knows them all.

The Papers Project Grows Up