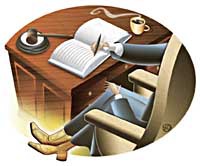 When I was doing background research on Sandra Day O’Connor before interviewing her for this issue, I kept running into references to her childhood. More than most public figures, and much more than any other Supreme Court justice I can think of, O’Connor’s formative years are a prominent feature in her personal narrative. It’s almost impossible to tell her story without including the romantic images of her cowboy father and his hired hands carving a living out of the Arizona desert, and her tough but refined mother reading the New Yorker and baking banana cupcakes in the dusty swirl of the family’s remote ranchlands.

Sandra Day O’Connor is the product of an environment that has become, these days, almost an anachronism—rural, self-reliant and unpretentious. Anybody who has lived with the smell of manure in their nose usually doesn’t need a lot of lessons about how the world works. Sandra Day, cowgirl, grew up with grit in her boots and in her bones, something her colleagues and the public came to understand during her 25 years on the court.

Martha Murphy, ’49, was O’Connor’s sophomore roommate at Stanford. A native of Los Angeles, Murphy says it was the rancher’s daughter, not the “city girl,” who seemed comfortable in almost any situation when they were in college. “She seemed so much more grown-up than the rest of us,” she says.

Murphy, who now lives in Roswell, N.M., with her husband, Bert, ’49, also a friend of O’Connor’s since their Stanford days, thinks the desert landscape contributed to O’Connor’s character. “I understand her better as an adult than I ever did when we were students,” she says. “There’s something about the open space that gives you a different way of seeing things. It opens you up.”

Perhaps the highest praise for a person of O’Connor’s success and stature is that the people she knew Back When are still her friends. Murphy is grateful to count herself among them. She went to see O’Connor in Washington, D.C., in 1983, three years after the justice’s appointment to the Supreme Court. She recalls being a little nervous and unsure how to address the justice. “I was prepared to be very formal, out of respect for her position,” Murphy recalls. “I turned the corner of the corridor and she was standing there with her arms outstretched. I was in awe, but she wouldn’t allow it.”

O’Connor’s story is rich with archetypal characters and themes, yet represents a fading portrait of a particular American way of life. Her ancestors staked a claim in hard-bitten country, taught their kids the meaning of work and passed on both the land and the lessons it provides. They have a word for people who come from that kind of stock.