What You Don’t Know About the Carillonneur

How and for whom the bells toll.

When Timothy Zerlang arrived on campus in 1983 as a doctoral student in the music department, he happened to be assigned a dorm room on the top floor of Crothers Hall, near Hoover Tower.

“I’d sit there in my room with the window open and hear the bells ringing,” says Zerlang, DMA ’89. He was a keyboard player who didn’t exactly know what a carillon was, but he was intrigued by the sound.

“So I introduced myself to Jim Angell, of course,” Zerlang says, referring to the university carillonneur at the time. “I met with him every week thereafter.” He practiced on his own, as well, then joined a carillonneur’s guild (yes, there’s a carillonneur’s guild) to perfect his new craft. In 1990, when Angell retired, Zerlang replaced him as Stanford’s official carillonneur.

Zerlang rides the elevator to the 14th floor of Hoover Tower to play the bells for commencements and concerts, or just for fun. Usually, he’s alone in the belfry, seated before the two-tiered keyboard, similar to that of an organ. He wears earplugs: The 48 bronze bells positioned just above his head can reach 110 decibels. Passersby pause to listen 285 feet below.

The instrument is controlled by wooden hand levers and foot pedals attached by metal cords to the specially tuned bells hanging above the keyboard. These bells—Stanford’s largest weighs 2.5 tons—are in fixed suspension; they don’t swing. Rather, the musician plays notes by moving the clappers, which strike inside the bells. The harder Zerlang’s fists and feet push the levers and pedals, the bigger the sound, and the more he sweats.

The art of the carillon stretches back to the 16th century in the lowland regions of northwestern Europe. Stanford’s carillon was donated to the Hoover Institution in 1941, a gift from the Belgian-American Education Foundation for the World War I–era famine relief work of Herbert Hoover, Class of 1895. 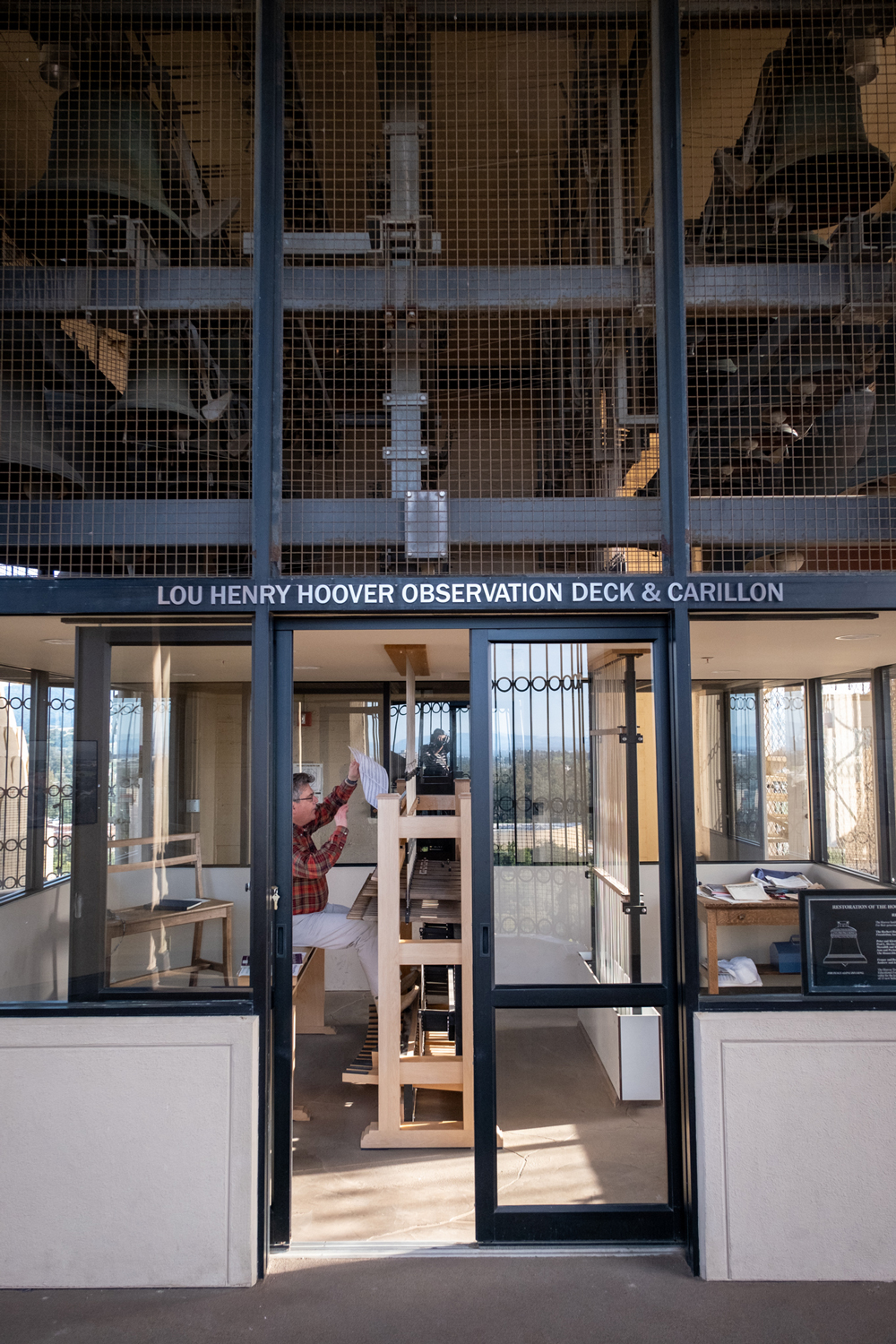 A princess in the tower

University lore has it that the carillonneur owns all the citrus fruit that grows on campus, but apart from this theoretical (and unsubstantiated) compensation, Zerlang wasn’t paid to play until 2008. (He holds day jobs as a piano lecturer at Stanford and director of music at St. Mark’s Lutheran Church in San Francisco.)

Still, the job comes with perks. In 2003, Zerlang played a duet on the carillon with Princess Mathilde, now queen and the wife of King Philippe of Belgium, MA ’85.

Folk songs are commonly played on the carillon because of its origins as a folk instrument in Europe. But Zerlang prefers to perform music written specifically for the bells. “The harmonic structure kind of dictates what works well,” he says. The pieces he plays, such as those by award-winning composer for the carillon John Courter, aren’t well known by most people. “Mozart did not write for the carillon.”

Students who want to learn to play the carillon “have to chase me down,” Zerlang says. “I want to see that they really want to do this.” When he’s convinced of their interest, he requires an audition on the piano. “I won’t let just anybody play from the tower. There’s a certain standard. Otherwise, that’s just not fair to the public.”

The case for using college to become more interesting.