What Sea Squirts Teach Us About Immunity 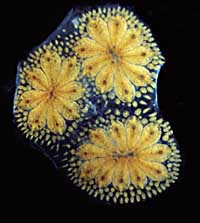 After studying a tiny, primitive, ocean-dwelling organism for 10 years, a Stanford cellular biologist thinks it just might help unlock puzzles about the human immune system. And it could hold promise for stem-cell research. “We have an animal here who’s regenerating its entire body every week,” Tony De Tomaso says, holding up a glass slide with a slimy, light-brown blob he has pulled out of a laboratory tank. “That could be very powerful for us.”

In an article published in the November 24 issue of Nature, De Tomaso, ’87, explains how his lab at Hopkins Marine Station ident­fied a gene in Botryllus schlosseri, a 550 million-year-old tunicate (named for the gelatinous “tunic” that covers its body), that “may provide insights into the evolution of vertebrate adaptive immunity.” In a companion article published in December in the biology journal Cell, lead author Diana Laird, PhD ’03, who was a graduate student in the Hopkins lab for four years, posits that the gene in B. schlosseri—designated FuHC—most likely evolved to “protect the body from parasitic stem cells.”

Known more commonly as “sea squirts,” the organisms grow naturally in marinas and intertidal coves, attaching themselves to boat hulls, docks, pilings and rocks. B. schlosseri starts life as a tad­pole larva and grows into an invertebrate that lives in a colony. It comes in a range of colors—blues, blacks, reds—and in Japan its cousins are considered seafood delicacies. But De Tomaso, who supervises 180 tanks of sea squirts, says the animal challenges researchers with “all kinds of nasty little tricks”—they’re full of compounds (many chemotherapy drugs come from tunicate extracts) and messy to work with.

The organism’s strangest characteristic fascinates molecular biologists. Unlike human stem cells that repair and regenerate specific organs, the stem cells in B. schlosseri make entirely new bodies every week. “It’s turning its body over all the time—making new, transient, disposable bodies,” De Tomaso says. Laird calls this the Wal-Mart approach to life, and De Tomaso marvels at it: “This animal has made such a weird evolutionary choice. It’s pretty unique.”

But back to the vertebrate immune system. Take a step down the evolutionary ladder, from vertebrates to jawless fish, and there is no predecessor to any component of our immune system. “It just exploded onto the scene, came out of nowhere,” De Tomaso says.

On the other hand, examples of allorecognition—the ability to tell “self” from “nonself”—are found in all the animal phyla, from sponges to humans. Put two colonies of sea squirts in proximity, on a lab slide or on a crowded rock, and two things can happen. In 95 percent of cases, the individual Botryllus recognize that they do not share a common FuHC allele, and they reject each other by pulling away. Five percent of the time, however, the sea squirts determine that they are compatible and they fuse to form a single colony. What’s more, the most robust, “winner” stem cells transplant themselves from one colony to the other and take it over, bypassing the system that likely is designed to limit or block them—and thereby protect each individual from unwanted intruders.

Scientists have always assumed that the raw material that evolved into the immune system came from allorecognition systems. Discovery of the gene that governs fusion and rejection in B. schlosseri shows, for the first time, how the allorecognition system works in a nonvertebrate. And there’s more. “We are seeing a structural relationship between these two [immune and allorecognition] systems,” De Tomaso says.

The Hopkins lab De Tomaso heads was set up in 1978 by pathology and developmental biology professor Irving Weissman. Weissman, MD ’65, now a leader in stem cell research, sought to answer questions about skin transplantation rejection in mice—by studying tunicates, whose reactions were visible within a speedy 24 hours. De Tomaso thinks his recent findings about the genetics of allorecognition may ultimately help stem cell researchers better understand immunity and regeneration. “We’d like to learn how to tell your immune system, ‘Don’t attack this skin graft. Don’t kill this tissue.’ ”