If your engine block isn s lots to love about Alaska. 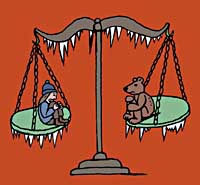 The clerk assigned to orient me to the Alaska Supreme Court did not offer disputations on the philosophies and work habits of the justices, or even court gossip. Instead, he handed me a pamphlet entitled “Bear Facts: All You Need to Know to Survive an Encounter” and pointed out the window to the mudflats of the Cook Inlet. “Don’t even think about taking a walk on the mudflats,” he warned. “Last year, some guy got stuck and drowned when the tide came in.”

Another departing clerk told me about two former clerks who died kayaking in Prince William Sound. Even dating could be dangerous: one clerk had been shot by the jealous ex-boyfriend of a woman he was dating. And then came the warning about the No. 1 death trap for the unwary—hypothermia. “Alaskan clerkships are great,” he concluded, “but we definitely have the highest clerk fatality rate of any court system.”

If untimely demise was the most popular topic of conversation during my year on the last frontier, the plight of single women was a close second.

Many single women in Alaska explain their singlehood with the adage, “The odds are good, but the goods are odd.” Susie’s AlaskaMen USA, a magazine devoted to marketing the state’s bachelors, is replete with photographs of guys leaning against big pieces of gear—planes, backhoes, trucks and boats—and stories involving Alaskan perils. Baron S. of Anchorage, for example, wrote to recount the time he was lying underneath his truck trying to fix the starter. “I soon realized that my hair had frozen to the ground! . . . [F]ortunately for me there was a person who heard me and brought me a hairdryer to thaw me out.”

My landlord wanted me to meet a friend of his. “His name is Bill, never married, and an attorney. And he’s an outdoors person.” (As if anyone in Alaska isn’t.)

“Sure, and he doesn’t do drugs, and I don’t think he smokes.”

The drug-free, outdoorsy lawyer and I had lunch a week later. He was a member of the Elks. He shot bears. He liked his guns and he liked talking about them. He made fun of my parka—“that might work in Florida”—and my car—“no studded tires?” He responded to almost everything I said (which wasn’t much because he gave me few opportunities to speak) with, “That’s an interesting outsider’s perspective.”

Starting in late September, Alaska loses daylight at the rate of five minutes a day. In the dark days of November, optimists reminded us outsiders that at least we weren’t in Barrow. The northernmost town in the United States doesn’t see the sun at all for two months.

But while winter brings lethargy, depression and a spike in alcohol consumption, the Alaskan spring brings hypomania. My renewed energy after a winter of hibernation proved to be a huge help in bar exam preparation. That summer I got home from work around 6 p.m., then listened to bar review tapes for four hours or so, at which point there was still enough light to head outside for tennis. Then I’d put aluminum foil over my windows to block out the light so I could get some sleep.

In late August, I moved to Los Angeles to begin my new life as an associate at a law firm. At a gas station near my new home in West Hollywood, the attendant was intrigued by my Alaskan plates and pointed to the plug hanging out from under the front of my hood.

I explained that it was for the engine block heater, which helped protect the engine from freezing during the winter in Alaska.

“Well, whatever it is, you’re in L.A. now, sweetheart, and folks around here will see that you’ve got something they don’t have and they’ll try to steal it, even if they don’t know what it is. Why don’t I cut the cord for you so it’s not hanging out of the front of your hood, okay?”

It was over with a quick snip. I suddenly missed Alaska very much.

The Play's the Thing