What Owls Teach Us About Stroke Rehabilitation 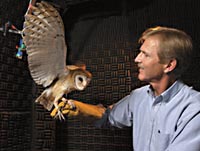 With their heart-shaped white faces and mahogany eyes, barn owls rank high in adorability. But it’s their acute sight and hearing that captivate Eric Knudsen.

“They have a tremendous capacity for localizing sounds,” Knudsen says about the creatures that are commonly called ghost owls or spirit owls. “You never see them because they only come out after dark. Then they take the place of red-tailed hawks, hunting rodents and mice by starlight.”

Chair of the neurobiology department at the School of Medicine, Knudsen has been studying barn owls for more than 25 years. Over the decades, he has altered their hearing with earplugs and fitted them with glasses that skew their vision. And he’s been amazed at how the birds have made adjustments and continued to zero in on their prey with singular accuracy.

Understanding how juvenile and adult owls’ brains function has implications for rehabilitating humans after brain injuries, such as those that result from strokes. “The basic issue we’re concerned with is the mechanism of learning—how owls’ brains learn from experience,” Knudsen says. “You can think of it like learning a foreign language when you’re very young: if you’re re-exposed, you can pick it up quickly. There’s something about early learning that can leave traces in the brain.”

Knudsen and his graduate students have monitored juvenile owls while playing them sounds of squeaking or chewing or even tiptoeing mice in the forest. They’ve found that the 8-month-old youngsters, who are constantly picking up new skills and processing new information about their world, can adjust the neurological maps that guide them to the sounds. For example, if a young owl is fitted with a pair of glasses that shifts everything in his field of vision to the right, he will see objects to his left when he looks straight ahead. But within several weeks, the bespectacled little bird will make an adjustment, shifting his head to the right to see what is directly in front of him. Adult owls, by comparison, cannot make a similar adjustment—unless they were fitted with the prism spectacles as juveniles, or unless the glasses are adjusted in small increments over a longer period of time. Bottom line: juvenile owls learn in huge leaps, but adults have to take much smaller steps.

“One implication of the incremental trend is that if you want to rehabilitate some capacity [lost to stroke], you want to assess what the person is capable of dealing with, and gradually modify within that range,” Knudsen says. “You don’t want to try to reinstitute total capacity in one step.”

The Mother of Tennis'

At 25, she t stop reinventing herself.