New Ways of Looking at the Past 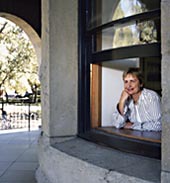 The Empire Strikes Back.

That Hollywood title, Stanford historians say, describes one of several intellectual threads that have been transforming their field over the past decade. New historiographies from former colonies like Senegal have compelled scholars of imperial Britain and France, which competed for control of the territory in the 16th century, to rework their accounts from transnational perspectives. Professors who used to teach courses about a single country now cross borders to consider regions. Politics and society are on the wane as a focus of study, and culture and religion increasingly are “in,” with proponents of so-called identity history asking questions about gender, ethnicity and sexual orientation.

Those are some of the sweeping changes six Stanford historians recently identified in conversations with STANFORD. New scholars, in particular, are turning out more and more paradigm-busting books. “Forty years ago, one could put on a kind of convincing imitation of mastering a field,” says James Sheehan, ’58, a specialist in modern European history. “But now that’s impossible. It’s very difficult to be an historian these days because there are so many choices, so much material to master.”

When he was in graduate school at the end of the 1950s, Sheehan says, his professors were a mix of World War II military officers, members of the Office of Strategic Services and émigrés from Germany. The question they hoped to answer was why Germany had failed to build a democratic tradition—what had gone so horribly wrong? Today, Sheehan has strikingly different questions for his students. “What do you care about?” he wants to know. “What is it that really moves you?”

While there are some methodological experts in the department—Ian Morris specializes in archaeology, for example—most of the 37 history faculty are defined by the geographic areas and time periods they study. “We will always have people doing Tudor-Stuart and Imperial Russia,” says Paul Robinson, who teaches courses in 19th- and 20th-century European thought and a freshman seminar on gay autobiography. But, he and others say, the approach will be different. “We’re still doing France, Germany and Britain,” says department chair Carolyn Lougee Chappell, an expert on modern European history, “but the teaching and the intellectual life in the department have changed very much.”

Lougee Chappell, for example, has spent the past eight years tracking down a family of Huguenots who were among 150,000 Protestants who escaped from France after Louis XIV revoked the 1685 Edict of Nantes, which had given Protestants equal rights with Catholics. In 1996, she found a trunk full of marriage contracts, wills and property records in a Yorkshire garage, and finally was able to identify a woman who had escaped by ship to England. The unfolding family history of Marie de la Roche Foucauld has served as a microcosm of a major event in French history, and has led Lougee Chappell to believe that the Huguenot migration was part of a mass circulation of peoples across national boundaries.

Lougee Chappell’s project also developed an identity-studies aspect. “I didn’t start out to do women’s history, but my research came to center on an island of women within a male-defined kinship network, and that raises new questions,” she says.

Norman Naimark, ’66, MA ’68, PhD ’72, who specializes in modern Eastern Europe, says junior faculty members are pushing their senior colleagues “ever more resolutely in the direction of cross-border or interconnected work.” Assistant professor Bob Crews, for example, studies both 19th-century Russia and its Islamic minorities. Assistant professor David Como, ’92, specializes in early modern British history and is finishing a groundbreaking book about Puritanism. Lecturer J.P. Daughton studies modern France and the missionaries who saved the converted souls of its empire.

Then there’s associate professor Kären Wigen, trained as a geographer, who studies early modern Japan and also keeps an eye on the global picture—patterns of migration, diasporas, language change and capital flows. She is author of a book about uniquely Japanese issues, The Making of a Japanese Periphery (UC Press, 1995) and co-author, with her husband, Martin Lewis, of one that looks at world regions, The Myth of Continents: A Critique of Metageography (UC Press, 1997). “It’s been very bracing to have these two projects going at once,” she says. “It’s made me pay more attention to international forces within Japan at a time when it was said to be closed to the outside world.”

Naimark flags another recent development that has had a huge impact on his and many other scholars’ research: the opening of archives in the former Soviet Union and Eastern Bloc countries. Last winter, he handed out a three-inch-thick course reader—a collection of American documents and translated material from Russian archives—to undergraduates enrolled in The History of the Cold War, which will be repeated this spring. “I would never have ventured to teach a course on the Cold War before these documents became available,” Naimark says. “For me, the enterprise becomes much more legitimate when you have a documentary base from both sides.”

Gordon Chang taps archives from sources closer to home, including a Menlo Park garage that recently yielded boxes of personal papers kept by a prominent Chinese-American in the early 1920s. An associate professor specializing in U.S. diplomatic history, Chang, MA ’72, PhD ’87, is completing a trilogy about Asian-American intellectuals who graduated from Stanford.

While many historians spend their lives researching a single topic, like Lincoln’s life or the antebellum South—“and producing fabulous work”—Chang says his own temperament increasingly has led him into interdisciplinary study, integrating issues of race and ethnicity into his work on diplomatic subjects. In the March 2003 issue of the Journal of American History, for example, Chang wrote about a little-known 1871 battle between U.S. and Korean military forces that “reveals the Americans’ assumptions about Korean barbarism and American moral superiority and demonstrated the influence of American attitudes about race and civilization on diplomacy and war making in a specific historical instance.” He points to the range of majors in his classes—American studies, comparative studies in race and ethnicity, urban studies, feminist studies—as an indication that students share his interdisciplinary bent.

The increasing breadth of the field creates challenges for a midsize department—albeit with two Pulitzer Prize winners—at a midsize university that “is not in an expansion mode,” as Lougee Chappell puts it. Every time there is a vacancy, the faculty must re-evaluate its priorities. “Should we concentrate so that we have clusters of people doing neighboring fields?” she asks. “Or should we disperse—have fewer Americanists, perhaps, so that we can have a specialist in South Asia? Those are the tough decisions we have to make.”

Crimes of Upholstery and More