What Eric Left Behind

I wish my husband could see how people remember him. 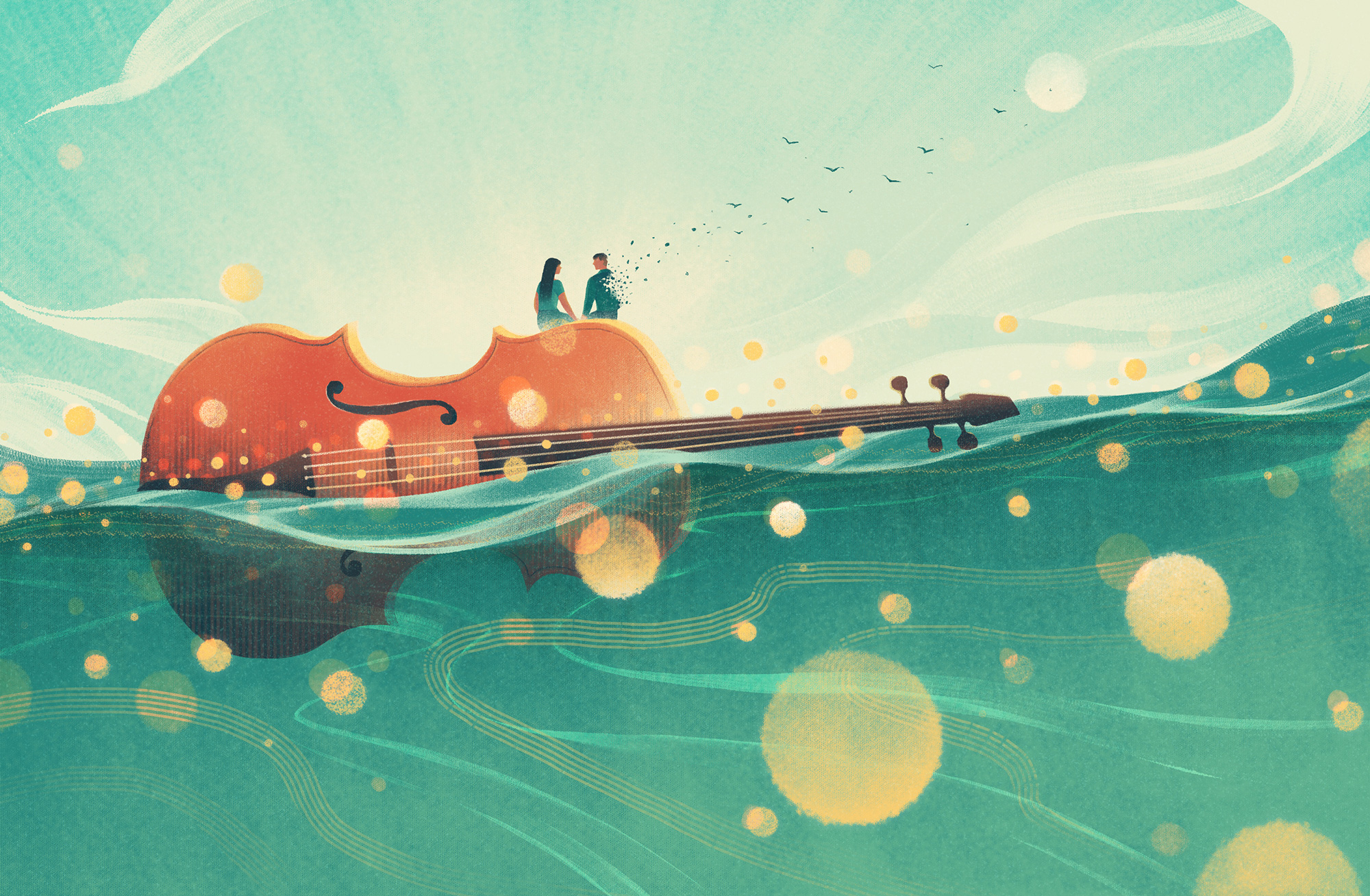 On Thanksgiving Day in 2017, my husband, Eric Sun, ’05, MS ’09, died of glioblastoma, an aggressive form of brain cancer. He was 34. He lived with the disease for 14 months, which is the median survival after surgery, radiation and chemotherapy. The rate of recurrence is 100 percent.

Widowhood is difficult, but there is one precious element: discovering what our loved one left behind. We can’t know how we’re perceived after we die, but being a widow feels like the next closest thing. It might be easiest to remember my husband by enumerating his possessions and his achievements: his Stanford degrees, his prowess as a violinist and a social dancer, and his work as an engineering manager. But Eric credited these to hard work rather than talent, to luck rather than his due. His values, instead, are what defined him. Over the past year, I’ve had glimpses into lives that he touched, and I’ve seen how his values are living on. These are Eric’s final gifts.

In regular updates to a group of more than 900 friends, family and colleagues on Facebook, Eric shared not only medical updates but also personal reflections: commenting on his circumstances with humor and positivity, seeking simple joys while awaiting the next piece of bad news, the simultaneous feelings of gratitude and devastation in knowing with near certainty that the end was soon approaching. “Don’t ever forget how lucky we all are, and don’t take for granted the opportunities we all have to do great things,” he implored in one post. These reflections turned out to be a catalyst for others to act—not only on his behalf but also in their own lives.

Near the end, when we were planning a celebration of Eric’s life that he would attend, a family member pulled me aside to question, “Isn’t it better not to let people see him like this?” I looked over at Eric: slumped weakly in his wheelchair, squinting to make out his surroundings, cheeks sunken after weeks of being unable to keep food down, pitifully young. I looked again and saw him for what he was: standing tall in spirit, ever loving, humble enough to accept the support of his community even if it meant letting them see him at his worst, generous in sharing the only thing he had left to give—his time.

Eric’s willingness to be vulnerable has granted others what it granted him: the sense of not being alone on the journey.

In the past year, I’ve come across dedications to Eric in various performance programs. They came from friends and strangers alike and expressed a renewed sense of purpose for being onstage, for starting their own music and dance programs, for creating local performance opportunities—and, even once, for bringing an instrument along on a first Air Force assignment overseas.

Friends have begun to ask one another for help with issues that had gone unspoken in their seemingly picture-perfect lives—mental health problems, career instabilities, marital struggles, financial difficulties. Several have opened up about the physical horrors of infertility and their accompanying feelings of envy, guilt and isolation. But they are isolated no longer. Eric’s willingness to be vulnerable has granted others what it granted him: the sense of not being alone on the journey.

Eric would have been gratified to learn that he continues to be an icebreaker. Previously unacquainted friends of his cross paths and find that their shared loss opens the door not only to swapping happier memories of him but to making new ones for themselves. These connections unfold serendipitously—whether at work, when someone spies a memento of Eric on someone else’s desk, or out of the blue, in places where people aren’t expecting to make friends.

Rachel Liaw, ’11, remembers an unlikely camaraderie during one of Eric’s final violin performances, where he had worked with the box office to ensure that his friends had great seats near one another. He knew he wouldn’t be able to interact with them during the show, so he expressed his appreciation for their support by leaving notes at their seats—along with glow-in-the-dark stickers that would help them identify one another when the house lights went down. Rachel recalls, “At intermission, in the line for the women’s restroom, we recognized one another by those stickers, and they spurred [us]: ‘We’ve got to get back to our seats to see Eric; go, go, go!’ ”

With a clear-eyed understanding of the medical literature, Eric was aware that this recurrence likely marked the final countdown. Yet he kept practicing.

Some of these connections have only grown stronger over time, with friends who shifted priorities in their own lives to make ours easier. Christina Tseng Devine, ’03, was an upperclassman in Burbank my first year and told me that she had groaned upon learning she had drawn into a dorm with freshmen. I’m grateful we connected back then; as a physician, she helped me navigate the glioblastoma research, and, over the course of that year, she became a most trusted friend. She was the first person I called after Eric died in my arms, and her calm response, “I’ll be right there,” helped me take the deep breath I needed for what lay ahead. Serving in both professional and personal capacities, she directed funeral services, administrative formalities, equipment removal and loved ones for the rest of the day. When she and her husband, Mike Devine, ’00, stood by Eric’s bedside the day he died and sang their children’s favorite song, “Mr. Golden Sun,” to him in farewell, I conveyed my silent thanks to him for bringing out this shining demonstration of friendship.

Our friend Vincent Mei, ’09, MS ’10, summed up the philosophy that drove my husband: Eric showed us how to “whole-ass” life. When Eric saw that his violin playing could bring people together, he gave himself one final challenge: to play in a local production of Fiddler on the Roof. He intended to play not only the full three-hour orchestra part but also the technically challenging virtuosic solo that John Williams wrote for Isaac Stern to play in the movie version.

It was April 2017 when Eric set out to learn the piece—known for its complexity as well as its difficulty for even highly skilled violinists to master—and he knew he might not make it to the show’s opening night, in September. By June, it looked even less likely: An MRI showed new tumor growth outside of the treatment area, an unequivocal sign that the disease was spreading. The new growth wrapped around sensitive structures near the brainstem, encroaching on the areas responsible for vision, balance and memory and making surgery infeasible. At best, radiation could slow its progression.

With a clear-eyed understanding of the medical literature, Eric was aware that this recurrence likely marked the final countdown. Yet he kept practicing, kept taking lessons to perfect the solo, kept making new friends in the theater community. On opening night, as we put away the instruments, he turned to me with the most beatific expression: “I did it, love.” At this point, tumors had spread down his spine.

And yet it was still not over for him. There were 14 performances scheduled, and each night, Eric pushed himself to share that music. With his vision dimmed and sense of balance rapidly deteriorating, he opened Act I with the simple violin melody, walking unsteadily across the narrow proscenium. Production manager Patti Reed followed just below him offstage, her arms extended and ready to catch him if he fell. Onstage, Dan Kapler, as lead character Tevye, subtly guided Eric’s path while speaking the opening lines for “Tradition.”

By the time of his celebration of life, just five days before his death, Eric’s memory of the previous weeks was gone. Our friend Brett Marty related to me their final conversation at the celebration, in which Eric asked, “Do you think I’ll finish the Fiddler run?”

His voice catching, Brett told me what he’d told Eric: “Yes, you did.”