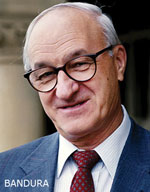 Albert Bandura, professor emeritus of psychology, and Stanley Falkow, professor emeritus of microbiology and immunology, are among the latest recipients of the National Medal of Science, awarded for the White House by the National Science Foundation. The honor is bestowed annually to individuals who have made outstanding contributions to science and engineering; Stanford was the only university with two winners of the 2015 awards, announced in December.

Bandura, a member of the Stanford faculty since 1953, is recognized for his work in social cognitive theory and self-efficacy, a belief in one’s capabilities. Falkow joined Stanford in 1981 and is known for his studies of how bacteria can cause human disease and how antibiotic resistance spreads. 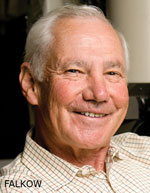 “After realizing that the call was not a prank staged by my colleagues, this stellar honor still feels surreal to me,” said Bandura. Falkow said the medal “was a total surprise,” adding that there are hundreds of students and colleagues he thinks of as sharing the honor, because “in science, it’s not I, it’s we.”