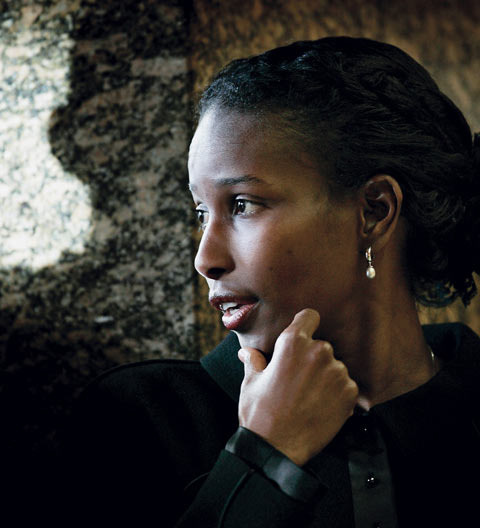 Ayaan Hirsi Ali has been called the best-known feminist intellectual ever to come out of Africa. In the West, however, the controversial Somalian activist has often been attacked for her powerful denunciations of radical Islam and Sharia law.

Her biography is shocking. She survived genital mutilation, fled Africa and became a member of the Dutch Parliament. She collaborated with Theo van Gogh on his film Submission, which slammed the treatment of women in Islam and led to the filmmaker’s assassination and a fatwa against her. In 2014, after a campaign denouncing her, Brandeis University revoked its honorary degree and invitation to speak.

Undeterred, she wrote the bestsellers Nomad, Infidel, Heretic and The Caged Virgin, and this year’s monograph The Challenge of Dawa: Political Islam as Ideology and Movement and How to Counter It (Hoover Institution Press). A Dutch and American citizen, she started the Ayaan Hirsi Ali Foundation in New York to further her work.

Hirsi Ali is also one of the Hoover Institution’s newest fellows, when she isn’t on the road speaking and giving media interviews. She spoke with Cynthia Haven for Stanford.

In 2004, the Dutch filmmaker Theo van Gogh was murdered. A death threat targeting you was pinned to his chest with a knife. What is life like under a fatwa?
I’m surrounded by men who carry guns and who tell me where I may and may not go, and what I may and may not do. So I’m not entirely free. That’s all I can say, for security reasons.

You’ve changed. While you earlier thought that Islamic violence was inextricable from Islam itself, now you are calling for religious reform and have joined forces with like-minded Muslims.
Well, first of all, I have grown up. But let’s make some distinctions. Islam is treated just like any other religion in the U.S. In reality, Islam is part religious and part political. And the argument I make is this: Let’s protect the religious aspects of Islam. Let’s fight the political aspects of Islam that are subversive, using economic, diplomatic and political means.

Tell us about your new book, The Challenge of Dawa.
Dawa is the infrastructure used to indoctrinate and radicalize. These Dawa groups have taken root in America and become influential within ethnic communities. Dearborn, Michigan, used to be home to an assimilated American Muslim community. Nowadays, you see things that will look familiar to a European. A woman walking behind her husband. Rows and rows of houses where women just don’t come out. Parents trying to shut their kids out of American life, either homeschooling them or sending them to Muslim schools and centers. You’re seeing exactly the same “cocooning” as in Europe.

Are we in any sense winning “the war on terrorism”?
No, because we’re not fighting it. We don’t even recognize we’re fighting an ideological war. Partly it is the arrogance. We think of radical Islam more as a nuisance. “Oh, it’s Al-Qaeda. OK, we’ll send some guys, then, and some drones. Whatever.”

One chapter in Heretic suggests addressing jihadi terrorism with an information campaign such as the West deployed during the Cold War. Eminent intellectuals, including Bertrand Russell, Karl Jaspers and Jacques Maritain, supported the dissemination in Eastern Europe of more than 10 million books and magazines.
And we never said our system was a moral equivalent with the Soviet system. Nor did we pretend that capitalism was a sort of salvation, a counter-Utopia. It wasn’t. By the way, Bertrand Russell had been attracted to the idea of communism until he saw it in practice.

As you pointed out, that effort operated at a fraction of the trillions we’ve spent on foreign wars.
One MOAB — the mother of all bombs — what did it cost? If they would give that to those of us who want to fight this war of the minds, it would be way more effective. And it’s more humane. It’s moral. You’re not killing people. The goal is to change people’s minds.

To take the Cold War analogy all the way, you have to discuss the philosophical legacy of Mohammed. Like Marxism, it includes a political theory. When Marxism was applied in the Soviet Union, Cambodia, China, parts of Africa, it was manifest for all to see. However eloquent Mr. Marx was in his idea of justice and equality on the ground, it led to gulags.

When Islamic law is applied as a blueprint for society, what is the outcome? You couldn’t wish for a better demonstration of that blueprint than ISIS. It applied the very letter of the law. When you use the state as a tool to make this from top down, to create this ideal Utopia, it’s anything but Utopic.

You say that we celebrated Aleksandr Solzhenitsyn, Andrei Sakharov and Václav Havel — and so we should celebrate Islamic reformers. Can you tell us about one or two of them? Who are the Voltaires of Islam?
There’s one here in the United States. His name is Faisal Al Mutar, and he’s from Iraq. I’ve listened to him on American campuses. He’s compelling, logically consistent, persuasive, and very funny.

His organization, Ideas Beyond Borders, reaches out to change minds. I don’t know what the future holds for him, but hey, if you’re looking for compelling people who reach thousands, maybe millions, he’s determined to do that. I pick him because he speaks Arabic and he’s working from the United States of America.

There’s another name we shouldn’t forget: Raif Badawi, a young Saudi national. He blogged about the injustices in Saudi Arabia: the abuse of power, the concentration of power in the hands of the clergy. He argued for more secularization. He was sentenced to a thousand lashes. Fifty have been administered. He is being tortured, and he is diabetic and in frail health. Publicity is keeping him alive. If there’s one thing I could ask Donald Trump, it would be to free that young man.

People on the fringe right have used your name to justify Islamophobia and inflame an anti-Islam movement in America. What would you say to them?
I would say there is no Islamophobia. It’s a strategically concocted term, designed to give Westerners the same reaction as when you condemn homophobia or racism. Islam is a religion. It’s a set of ideas. So if you’re critical of this set of ideas, you’re not phobic: You have an opinion.

Many people find what you say offensive.
I think what used to be called “provocative” is now called “offensive.” We’re in the grip of identity politics and political correctness. Radical elements benefit from that and exploit it.

People don’t see that Sharia has spread from its heartland all the way to the West. Female genital mutilation is happening in the United States. Child marriages, forced marriages and honor killings are happening in the United States and Europe. They don’t get publicized because the term “Islamophobia” is thrown at everyone. News outlets feel too scared to handle this.

So back to your earlier question. Yes, I have changed. It used to be hard for me to have conversations with Muslim reformists because I would get stuck in a place of logical inconsistency. On the one hand, you want to reform Islam, but you don’t want to question the legacy of Mohammed or the morality of the Quran. So how can you reform?

I’ve come to realize that, first of all, things take time. Sincere people are working on it — Asra Nomani, Zuhdi Jasser and others. I’m also working with ex-Muslims who want to raise critical questions. I want to create a wider platform of people inside Muslim communities in the United States, particularly on campuses, where the minds of the future leaders are shaped.

How realistic is your hope for reform? Are you being naïve?
We forget the Islamic Republic of Iran. A whole population in Iran has lived under Sharia from 1979 to now and are very much opposed to it. May I say that the people that I’ve met who are the most hostile to religion in general and Islam in particular are Iranians?

How did the Arab Spring affect the thirst for reform?
In the aftermath of the Arab Spring and the rise of ISIS, Muslims who had avoided dealing with Islam as a political system couldn’t duck it anymore. They were put in a position where they had to decide. Now they’ve coalesced into a more visible group of people I call “modifiers.” They note that something about Islam — its tradition, its religion, its scripture — needs to be seen historically and not carried into the 21st century.

I give examples in my book Heretic. For instance, a clergyman who rhetorically asks, “Why should we hate Jews, when we take advantage of all these discoveries that the Jews made?” Questions like that may seem commonsensical here, but it’s revolutionary in parts of the Middle East where the general population is indoctrinated for years and years to hate every Jew, good or bad.

And yet, the electoral process hasn’t necessarily supported your hopes, has it?
The Arab Spring was eye-opening, and I was very optimistic what was happening in Tunisia and in Egypt. In both countries, the Muslim Brotherhood entered the picture. They were very well organized and running for elections. In Egypt, they won and in Tunisia, they won twice.

For me, that was predictable. What was heartening was the opposition, the people who didn’t want Sharia law and said so as clearly as possible: “We oppose the Muslim Brotherhood because they want to establish Sharia and we don’t want Sharia.”

You ask what changed my mind. It is this empirical mass of evidence, right in our faces. Not only did I change my mind, but I began to see this opportunity that our governments are not taking advantage of.

So Islamic doctrine has not changed but maybe, potentially, there’s a large enough constituency that could change it, could modify it. Many are trying, and paying with their lives.

What would you like to say to America in a nutshell?
I would say push back on Dawa. We need to educate ourselves on what Dawa is — it’s both the ideology of political Islam and the organizational infrastructure that Islamists use to inspire, indoctrinate, recruit, finance and mobilize those Muslims whom they hope to win over to the extremist cause.

When I was preparing for university in the Netherlands, I had history and civics classes, where we were taught about National Socialism, and how that idea came about. We learned how it infected people’s minds, how it spread and how the Jews were cleansed out of the Netherlands. The bad idea of today is radical Islam, political Islam. We should use history to educate children from kindergarten to college. Sharia is not an alternative. We have better ways than Sharia, jihad, and the crazy idea that all knowledge and morality come from one man and one book. For every idea there’s a counter-idea.

Cynthia Haven's most recent book, Evolution of Desire: A Life of René Girard, will be published next spring by Michigan State University Press.