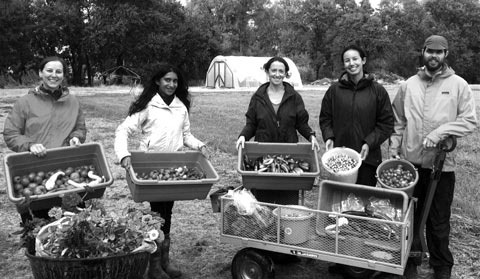 Valerie Seymour, ’02, MS ’03, had already notched one career pivot, from engineering for the defense industry to designing clean energy systems, when a chance encounter with a landscape designer led to dating and then house-hunting. Not far from her job in Sacramento, Calif., Seymour and her partner, Jeff, found a little plot of land — she had been wanting to grow vegetables — with a spacious home and a flowing creek.

All was well until, right in the middle of escrow, Seymour got laid off. She had planned to farm only on the side at first, but life had changed. Could she go all-in? Their land had to be coaxed into fertile soil. Seymour bought a plow at auction. In modern farmer style, she watched YouTube videos on tractor parts, and set up a blog and an Instagram account.

The result is Plum Possum Farm, now a 3-year-old venture with offerings ranging from turmeric to shishito peppers to ashwagandha root. The farm has joined a co-op, Tahoe Food Hub, which sells its produce to Lake Tahoe-area restaurants. “There are tomatoes, cucumbers and summer squash planted out in the field, along with potatoes and sunchokes, which are still safely underground out of the elements,” Seymour wrote this spring. What’s next? Experimenting with even more unusual fruits and vegetables, organic certification and lots of sorghum cocktails.

MONYA DE, ’00, is an internist, a journalist and an entrepreneur in Los Angeles.