Until this past year, bioengineering postdoc Heidi Arjes was known more for her knitting than for her opinions on knotty political issues. “It’s always been my outlet and my way to feel like I’m helping,” she says. “After the [presidential] election, I was thrown for a loop. I started knitting like crazy.”

Inspired by the January Women’s March Pussyhats, Arjes, who studies groups of bacteria called biofilms, designed and published a knitting pattern for April’s March for Science. Her Resistor Hat is a beanie encircled by an electrical schematic with three resistors, a visual science pun in keeping with fellow marchers’ signs. The post on her crafting blog became her most popular ever, garnering roughly 41,000 page views as her story gained media interest. Arjes is now trying to use that momentum to conduct further public outreach through science-themed knitting. “People [get] excited because they see the hat, and then you can explain the science,” she says. 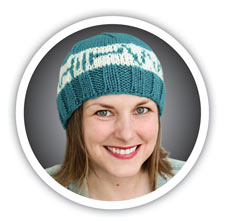 She took about 120 resistor headbands and a handful of crocheted beanies with her to the March for Science in San Francisco, where she met other knitters who’d found her pattern and made their own. “It was really nice to see,” Arjes says. “It’s a hobby, but it’s also a way that I can make a difference.”

Stanford, I Screwed Up