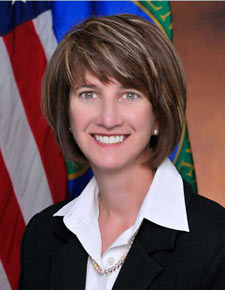 Kristina M. Johnson, ’79, MA ’81, PhD ’84, will become the second female chancellor of the State University of New York in September. In that role, she’ll oversee 29 four-year colleges and universities and 30 community colleges, which collectively serve about 440,000 students.

An engineer, a professor, a government official and an administrator, Johnson served as dean of the Pratt School of Engineering at Duke University and as provost and senior vice president for academic affairs at Johns Hopkins University before joining the Obama administration in 2009 as the Department of Energy’s undersecretary of energy.

Earlier in her career, she was a professor of electrical and computer engineering at the University of Colorado at Boulder, where she co-founded the Engineering Research Center for Optoelectronic Computing Systems, supported by the National Science Foundation. While there, Johnson and her research lab spun off several companies that helped restart the 3-D movie industry. (She holds a patent on technology that allows for high contrast color in 3-D films.) Johnson also founded Enduring Hydro, a clean energy consulting and construction company that now operates as Cube Hydro Partners, which invests in, develops and modernizes hydroelectric facilities in the eastern United States.

While on the Farm, Johnson reveled in her physics classes and, as a PhD student, worked on holography and optical signal processing. She also played varsity field hockey and helped start a club lacrosse team for women. “I think what I remember and appreciated the most about my eight years on the Farm is Stanford was a family,” Johnson writes in an email. “Faculty, graduate and undergraduate students and staff all looked out for each other and taught each other. And when I was diagnosed with Hodgkin’s disease, the faculty, students and staff all rallied. Their support and the care of my oncologist Dr. Rogoway and my radiologists Dr. Ray (really!) and Dr. Fish gave me these last 37 years that prepared me, along with all my other Stanford experiences and friendships, for this next adventure. Thank you and Go Cardinal!”