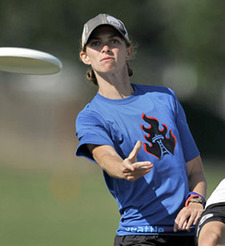 When I stepped onto Roble Field my freshman year at Stanford for my first ultimate Frisbee game, I had no idea that the sport would take me halfway around the world and introduce me to lifelong friends. In July, I found myself in Prague in the Czech Republic at the World Ultimate Club Championships (WUCC), experiencing sportsmanship at its best with the women's team Seattle Riot.

WUCC happens every four years and brings together the top ultimate club teams for a weeklong tournament that features intense competition and cross-cultural camaraderie. Prague, with its winding cobblestone streets, provided a picturesque backdrop for this year's event and an extra incentive for players, friends and family to dig into their vacation savings to attend. In total, 136 teams from 17 countries competed in four divisions.

Ultimate is an amateur sport that is self-officiated, relying on players' respect for each other and the rules to resolve disputes on the field. This principle—called Spirit of the Game—is nowhere more evident than at WUCC. All week teams pushed themselves to the brink with athletic plays and sophisticated strategies, yet it was equally apparent how much players valued the opportunity to befriend their opponents after the games.

Some of my favorite memories: an impromptu dance circle with Venezuelan drummers during a lightning delay in the middle of a game. Czech beer. Discussions about the rapid growth of ultimate in various countries. Watching World Cup games in the town square with hundreds of soccer fans. Trading jerseys with the captain of the Japanese team HUCK after our game. The nightlife at a famous five-story discotheque. The tournament party on the banks of the Vltava. Reunions with many other world-class players who learned the game on Roble Field. And knowing that my Riot teammates gave their all during every point in every one of our games—including the one in which we took the bronze in the women's division.

GWEN AMBLER, '03, is a research coordinator at the University of Washington. She played with, captained and coached ultimate with Stanford Superfly.

It's All About the Brain

A neuroscientist looks at how his field intersects with almost everything else.