Some Jewelry With That Party? 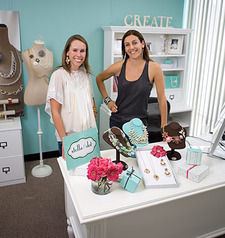 Think direct sales and what comes to mind? A 1950s mom hosting a Tupperware party? A salesperson pushing a product you don't really like? Staid, frumpy, maybe even disreputable? Jessica DiLullo Herrin calls that "the ick factor" and she is working to change that image, one trunk show at a time.

Herrin, founder of Burlingame, Calif.-based jewelry company Stella & Dot, brings contemporary methods to direct sales: Harness social networks, get celebrities pictured wearing your brand and give salespeople solid training. Stella & Dot pieces—from delicate gold chains to chunky turquoise to bridal pearls—have become staples in magazines like InStyle and Lucky. The firm has more than 8,500 "stylists" selling its wares and last year was recognized as one of Inc. magazine's fastest-growing companies. Revenues have grown from $3.8 million in 2008 to an expected $100 million this year.

This isn't the first business hit for the 37-year-old mother of two. Herrin was instrumental in WeddingChannel.com; she sold her share in 2007. Luxe Jewels, which became Stella & Dot, was launched in 2004.

Herrin, who calls Stella & Dot a "ridiculous Stanford alumni story," first connected with company chairman Mike Lohner, MBA '92, through Graduate School of Business message boards. While Herrin was chasing kids at her husband's 10-year reunion (Chad, '95, MBA '01, is a technology investor), he met Blythe (Henwood) Harris, '95, who headed jewelry for Banana Republic. He made sure the two women met, and Harris is now chief creative officer.

In the two years of research she conducted prior to launching her company, Herrin found that many direct-sales firms sold products that were outdated and gave salespeople poor support. "Some of the training videos were so socially awkward as to be cringe-worthy."

So who are her stylists? Professionals (mostly women, although a few men, too) who look for flexibility in their careers. They earn a 30 percent commission on sales, working part- or full-time. They get training in how to book shows, demonstrations about how to wear the jewelry, and financial incentives to recruit and mentor other stylists. Lindsay Walsh, 40, a San Francisco mother of three sons, started selling with the firm because it sounded like fun but has become one of its top earners. She and her team of 392 stylists grossed $700,000 in June. "I work full time, but it's flexible," says Walsh, who anticipates making a low-six-figures income this year. "That is the key."

Jewelry makes good direct-sales merchandise, says Herrin, because the retail jewelry environment has significant problems, including employee theft. Shoppers don't always like asking for pieces to be brought out one by one from a locked glass case. Stella & Dot stylists can wear their product and, when they get compliments, have a natural opportunity to say, "It's from a line I represent." Peninsula stylist Susan Drucker Hunsaker, a former high school teacher, has been known to wear jewelry even at the beach. "Stella & Dot has that effect on us."

An Age of Appetites

Allegra Goodman writes about when Silicon Valley was sure it could have it all.