The Very Blue Debut of stanford.edu

25 years ago, the chosen hue sparked a cry.

In some ways, Stanford was early to the World Wide Web party—SLAC established the first website in North America in 1991. Still, by the mid-’90s, the university proper had yet to develop a decent digital front door. Indeed, it didn’t even control www.stanford.edu, says Christine Kurihara, the school’s first web coordinator—a grad student in computer science had assigned it to himself. 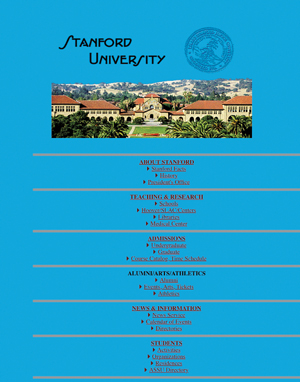 By 1996, however, Stanford was ready to get serious about an official home page. The CS student was agreeable, Kurihara says, happy to see the address finally put to good use. Design, though, proved pricklier.

The die was cast after the Boston-based design consultants stared down Palm Drive, awed at the Main Quad framed by blue skies and golden sun. Here was the essence of Stanford.

Not that you had to be a weather-beaten Bostonian to agree. Just a few months earlier, then-president Gerhard Casper had quoted the university’s first president, David Starr Jordan, waxing poetic to similar effect. “The red-tiled roofs against the azure sky make a picture that can never be forgotten.”

With two university presidents and consultants on a $15,000 contract in alignment, what could go wrong?

Well, alumni and students could ask why the sky was blue—or so vast. The blue background sitting behind an image of the Main Quad may have been inspired by nature’s azure, but it extended over the entire site. It was, to the Cardinal faithful, as if Cal had pulled a Big Game stunt on the university’s home page.

‘Do people really want a cardinal sky? What are we, Stanford on Mars?’

“I recall being bemused that some were so obsessed with Cal that they objected to a blue sky and yellow sun,” says Terry Shepard, then director of university communications.  “Do people really want a cardinal sky? What are we, Stanford on Mars?”

Edits were made after the back­lash, but the page had been coded line by line. There weren’t the tools that now enable small fixes to big problems. And so the very blue debut of www.stanford.edu continued. In 1998, it appeared in the book Web Pages That Suck. A year later, Stanford redid the site with white and cardinal in abundance.

Still, the more things change, the more they revert to a previous version. Today, the Stanford home page again features the red tiles of the Main Quad against a sky so blue it would make a Bostonian consultant in winter weep. “To paraphrase a biblical saying,” Shepard says, “there is nothing new under the (not-really-Berkeley-blue) sky.”

A new book describes a man on the fast track.

People may be waiting for Medicare eligibility to seek cancer care.