Despite the Cardinal's final loss, Christen Press's legacy is secure. 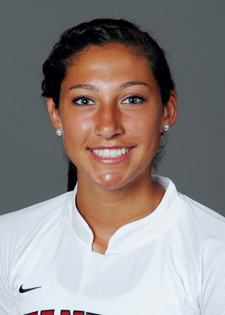 To be fair, context is important. In a noncompetitive scenario—say, a magazine interview—Press is warmly personable, quick to smile and congenial. What if that's her true signature? As time passes, her soccer career could fade away. She may lose interest in video-game tennis matches with her siblings. She might not ever play Monopoly again. Perhaps there will never be a child who makes the mistake of looking up at her and saying, "Mommy, let's race." Maybe everyone around her will be spared all that.

But at this stage of her life, there's no getting away from her inclination to grind people up and stomp on their dust. And December's maddening end to her final Stanford season—a 1-0 loss in the NCAA tournament final for the second straight year, this time to Notre Dame—is probably only going to make her that much more intense. "It's very bitter," she said after the title-match loss. The only two defeats suffered by the Cardinal over the last two seasons have come in the championship showdown (with North Carolina winning in 2009).

During most of the Stanford soccer season, the senior forward's scoring talent was calibrated to make opponents as frustrated as possible. Eleven of her 23 regular-season goals were scored in the clutch, when matches were tied or Stanford trailed, leading the Cardinal to an 18-0-2 record and the Pac-10 championship. "I like to be needed, and I thrive on a little bit of pressure," says Press, who led the nation with 26 goals over the course of Stanford's 23-1-2 season.

Press, from Palos Verde Estates, Calif., has a tenacity that's apparently innate, and more tellingly, she revels in it, with everyone in her family as chronic victims. Her incessant scrappiness has made life so extreme for her sisters that even Press acknowledges the bottom line: "It ends up in a fight unless I'm winning."

From her elementary school days forward, Press made Monopoly a nightmare for her older sister, Tyler, and younger sister, Channing. "If she wasn't winning, the game was miserable for everyone because she was so crazy about it," says Tyler, a second-year law student at Georgetown University. Whoever was winning, explains Tyler, was subjected to "torture"—a constant stream of carping, taunting and recriminations.

In more recent years, the battleground has included Wii tennis and Guitar Hero. At the end, Christen is always the victor, if only because no one is allowed to stop playing until she is. "She'll just outlast you, until you're too tired to beat her," says Tyler, who simply tries not to "give her the satisfaction of letting it be too easy for her."

Tyler speculates that Christen inherited her compulsions. She notes that their father, a former Dartmouth football player, insisted on racing his daughters long after it was prudent. "He would not stop, to the point that he pulled his hamstring and was rolling on the ground in pain.''

In the immediate future, Christen is hoping for an invitation from the U.S. Women's National Team, and she's interested in a pro career. Press was the 2010 Pac-10 player of the year and her legacy on the Farm is secure: She's the school's career leader in goals, assists and points, and those 26 goals as a senior tied her for the single-season record. There are just a couple of national title losses to forget.

"We worked so hard for it," she said, "but at the end of the day soccer is a crazy game, and I've learned over the years this is how it goes."

For the Cardinal, the winningest record ever, capped with a date at the Orange Bowl.