It's less rambunctious but still some fun that students have in the dark. 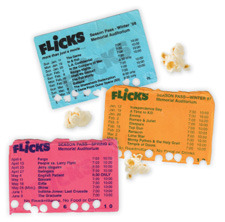 Flicks, a Stanford tradition since the 1960s, continues despite increasing competition for student eyeballs from personal screens. The Sunday-night showings of feature films—typically ones no longer in the multiplex, but not yet out on DVD—now take place in Cubberley Auditorium as well as Memorial Auditorium.

TICKET PRICES AREN'T WHAT THEY USED TO BE. Flicks was run as a business by ASSU and, later, by Stanford Student Enterprises. In the early '90s, former Flicks director Bob Florsheim, '92, recalls, "It was a huge gravy train of cash, and totally self-regulated. I remember once having five grand in the trunk of my car."

In the early 2000s, Flicks was reconfigured as a student group supported by the student activity fee. No more paper passes and bouncers with hole punchers; students just waltz in the door.

It's all in the timing. Years ago there were two showings: One usually drew a crowd of quiet cineasts, the other rowdy hecklers. As attendance and revenue began to drop this past decade, a single showing at 8 p.m. has forced film buffs and party hounds to get along. Carney says the usual screening draws about 600 attendees, and only the most egregious films (here's looking at you, Twilight) get heckled.

WHAT I REALLY WANT TO DO IS DICTATE. Flicks directors choose the titles single-handedly, although a website does poll students about what titles they covet. Every now and then a director gets drunk with power. "I missed the remastered Lawrence of Arabia when it was in theaters, and I was dying to watch it on the big screen," Florsheim recalls. "I knew turnout was going to be low, but I couldn't resist."

YOU SAW IT HERE FIRST. Universal Studios sometimes partners with Flicks on paid prerelease screenings of highly anticipated films. On November 12, it showed Harry Potter and the Deathly Hallows—Part 1 a week before the film's theatrical release and donated the proceeds to charity.

DEPARTED ATTRACTIONS. Each generation has special Flicks memories. In the '70s, Jorge Sapoznikow, MA '77, PhD '81, remembers a night at The Poseidon Adventure. "The lights went on unexpectedly and a policeman asked people to evacuate in an orderly fashion due to a bomb threat. Before he could speak, people were getting rid of their joints." The story goes that, in the late '80s, the tossing of toilet paper rolls, à la Rocky Horror Picture Show, was banned after one landed on a ceiling fixture—and ribboned down the next day while a visiting dignitary was speaking. In 1997, Tree candidate Matt Merrill, '00, rappelled from the Mem Aud ceiling dressed as Spider-Man.

PLUS ÇA RECYCLE, PLUS C'EST LA MÊME CHOSE. Notes and printouts still shower from the balconies on occasion. The Graduate is still the final Flick each year.

Chaney Rankin Kourouniotis, ’00, is a writer in San Francisco.

The Far Side of the Farm

The Far Side of the Farm

Autism's origins lie hidden in a perplexing maze of behaviors and biology. Step by step, researchers are finding their way inside.