The Steadiest of Statesmen 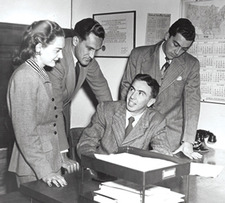 Bill Clinton described Warren Christopher, his former secretary of state, as possessing "the lowest ego-to-accomplishment ratio of any public servant I've ever worked with." But there was a drive and ambition to Christopher that transcended his public modesty. In his 2001 autobiography, Chances of a Lifetime, Christopher, JD '49, wrote that he owed his career arc to advice from Dean Carl Spaeth of the School of Law. Spaeth recommended he emulate Dean Acheson, who combined corporate law with interludes of public service.

For more than a half century from his base at the Los Angeles law firm O'Melveny & Myers, Christopher did just that. The diplomat who served three Democratic presidents died March 18 of complications from kidney and bladder cancer. He was 85.

His most shimmering accomplishment —one that prompted a rare display of public tears when he succeeded—was doggedly negotiating the release of the 52 American diplomats seized by radical Iranian students in November 1979. Adroitly using Algeria as an intermediary, Christopher, as Jimmy Carter's deputy secretary of state, finally brokered the hostages' release on January 20, 1981, the day of Ronald Reagan's inaugural.

Christopher was in government during those pivotal months only because he had chosen service over ego. In April 1980, he had resisted the urge to quit when he was not promoted to replace Secretary of State Cyrus Vance. Years later, Christopher described Washington as "a cruel town" as he recalled, "For a week, I was supposed to be secretary of state after Vance resigned, then I was passed over and everyone pounced."

But with Clinton's election in 1992, Christopher finally attained the Dean Acheson chair atop the State Department. The era did not call for grandiose Christopher Doctrines—and his strength was not strategic vision, but rather a belief in the power of negotiation. The flamboyant Richard Holbrooke, as the chief Bosnia negotiator, won and deserved public credit for the 1995 Dayton peace accords, but Christopher, always slightly offstage, supervised the effort. He also played a key, largely unheralded role in the 1994 peace treaty between Jordan and Israel.

Even Christopher's failures were emblematic of his determination. As a reporter covering "Chris," I found it admirable that he was willing to risk humiliation by making 24 separate trips to Damascus, enduring the same tedious lectures from Hafez al-Assad, in a futile effort to bring peace to the Syrian-Israeli front. Not all of his decisions passed the test of time. Like the rest of the Clinton administration, Christopher failed to act to prevent genocide in Rwanda. 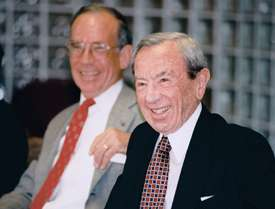 CAMPUS SPEAKER: In 1996, the secretary of state delivered an policy address at Memorial Auditorium. (Photo: Linda A. Cicero)

Although Christopher, the last in a string of 63 white males to serve as secretary of state, was as impeccably tailored as most of his Eastern Establishment predecessors, he lacked their patrician pedigree. Yes, Christopher was the son of a banker, but his father's bank, which foundered in the Depression, was in Scranton, N.D., population: 300. The family was impoverished when they moved to California in 1939, shortly before Christopher's father died.

The state became his lifelong home. From his 1965 appointment by Gov. Edmund "Pat" Brown (an early mentor) to the state panel probing the Watts riots to his chairmanship of a commission to reform the Los Angeles Police Department after the 1991 beating of Rodney King, Christopher played conciliator in local as well as international matters. He served on Stanford's Board of Trustees for two decades. He is survived by Marie Wyllis Christopher, his wife; four children including Thomas, '81; and five grandchildren.

Christopher's last center-stage role—directing Al Gore's efforts during the 2000 election recount—remains his most misunderstood. Criticism about his lack of barbrawl aggressiveness in confronting the George W. Bush campaign is unfair. For in all matters, from the Johnson administration to the Florida recount, Warren Christopher was a portrait in consistency—lawyerly, urbane and dedicated to a laudable tradition of public service.