Karen Erickson’s first call after returning to the burned-out ruins of her Santa Rosa home wasn’t to her insurance agent, the postmaster or any of the other people on a typical list of disaster contacts.

Instead, she laughs, she phoned the Stanford Athletics box office. Her football season tickets had gone up in flames along with everything else that she, her husband, Joel, and her son Kirk hadn’t been able to throw in their vehicles, and the couple needed to be at the game that coming Saturday during their 40th reunion.

It’s not just that she’s a super fan. Amid the mind-bending mountain of new problems, this was one she could solve immediately. “It was like, ‘Here I am. I’ve lost my house and all my possessions. What can I do right now?’” she says. “Otherwise, where do you start?”

Getting to the game and to campus was also truly important to them. Stanford has been a lifelong haven, Karen says. It’s where her father went to college, where she and Joel, both ’77, met as freshmen and married as juniors, where both played sports, and where their three kids were baptized. Now, two of their children are also alums.

In short, Stanford was not only home; it was suddenly their only home. And where else do you turn in disaster? “To be able to walk on campus—there is nothing more comforting and normal,” she says. “It is our anchor point.”

Plus those reunion hotel reservations were now extra helpful. “We were ecstatic about the timing,” Karen says. “We had someplace to stay.” 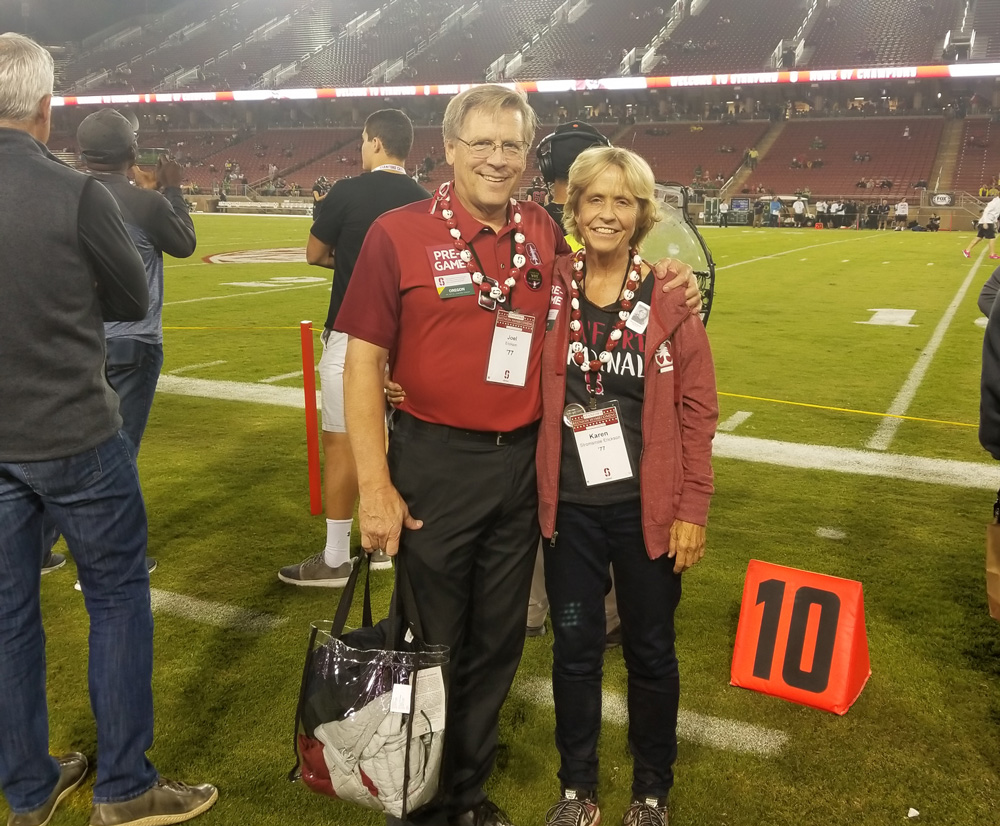 The twist of fate had come with little warning. The Ericksons had just returned from vacation in Maine, arriving too late Sunday to bother unpacking. The wind was howling, the power was out and smoke was in the air, but when Joel checked his phone, the fires seemed too far away for concern.

Around 2 a.m., their neighbor Susan called, wondering if they should be worried. Karen jumped in her car and drove to higher ground to get a better look. She could see flames on a ridge two miles away. “It looked unstoppable,” she says. She raced home to rouse Joel and Kirk, ’10, then drove out again to warn an elderly couple who lived nearby.

By then, the fire had raced even closer. A block from the elderly couple’s home, a 30-foot wall of flames forced her to retreat. Back on her street, Karen knocked on doors while the family grabbed what they could: home movies, a Stanford photo album, old pictures and a family spinning wheel made in 1791. Busy with other duties, Kirk, a former Cardinal baseball player, grabbed only a few personal possessions: his Stanford catcher’s mitt, his Stanford cleats and a stuffed Mickey Mouse.

They had more time to react than many that night. But in the turmoil and the darkness, gathering everything was an impossible task. Karen was leaving as she realized she’d forgotten big stacks of lovingly preserved mementos from each kid’s childhood. “I almost turned back,” she says.

By then, though, visibility was about 10 feet and the bushes around her were catching fire. They evacuated to Joel’s office in downtown Santa Rosa, the reality of the situation settling in. The scale and speed of the fires had been so great, they’d not seen nor heard any police or fire engines in their neighborhood. (Strangers, they would learn, had helped the elderly neighbors Karen could not reach.)

Then followed a few days of the new normal. Joel, a cardiologist, was busy with patients, many of whom needed medicines lost in the fire. Work, he says, provided its own therapy. Karen helped at evacuation centers. They stayed with cousins in Orinda, Calif., Joel sleeping two nights in his office. On Thursday they headed to Stanford.

The fact that they had never unpacked from vacation proved a small blessing: They had something to wear for Dinner on the Quad. But the huge sports fans were now bereft of Cardinal gear. Jody Nyberg, Karen’s lifelong friend who works at Stanford, took them to the Bookstore to buy Stanford shirts, rally beads and a clear bag—as if they were first-timers to a game.

The weekend couldn’t provide a total escape from reality. At Classes Without Quizzes, one of Karen’s favorite events, she realized she wasn’t focusing as clearly as she normally did. But she says the concern she and Joel received and the camaraderie they felt throughout the weekend was wonderful.

Athletics brought them out to the field for pregame activities ahead of the football kickoff. When Karen, a former hoops player, attended a basketball alumni event, she found her tote bag stuffed with extra clothes. Duncan McColl, ’77, brought them more Stanford gear. “Now most of my clothes are Stanford clothes,” Karen says.

They even found a place to stay. Fellow Santa Rosans Karen, ’77, and Gary Bei, ’76, had also evacuated but their home had survived. They offered the Ericksons an extra bedroom. (The Ericksons’s daughter, Kjerstin, ’05, secured an RV for her brother.) 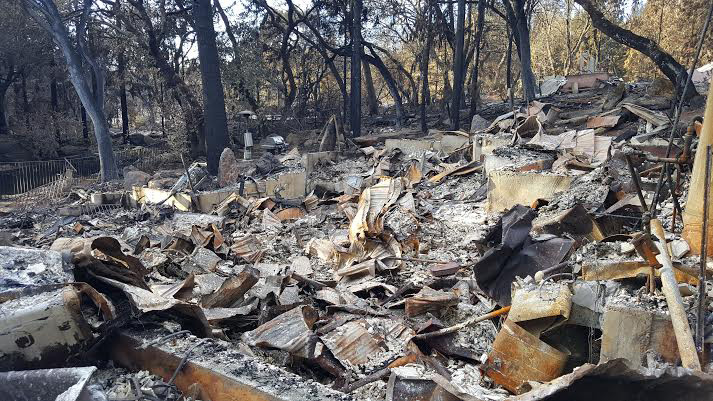 The Ericksons lost many cherished mementos to the flames. (Photo: Courtesy Karen Erickson)

The weekend had to end, though. And on the return to Santa Rosa that Sunday, Karen grew anxious about what she’d find. But when she passed under the overpass near Santa Rosa’s downtown, she was struck by the vast array of handmade signs of support, hope and thanks.

It was a taste of what was to come. In the wake of the disaster, there has been an unleashing of community spirit, of strangers making eye contact and reaching out, of volunteering and donating and sharing. “It’s been one of the most beautiful experiences to go along with one of the most painful,” Karen says. “It brings tears to my eyes and joy to my heart—way more than possessions ever could.”

Any way you look at it, the Ericksons are far from unique. Some 2,900 houses burned in Santa Rosa. Approximately a sixth of the city’s doctors lost their homes, as did other Stanford alumni. Across the street from the Ericksons, their longtime friends John Gansel, ’81, and his wife Susan—the person who’d alerted them at 2 a.m.—also had their home burn down.

None of the furniture, jewelry or art means much, Karen says. But the mementos and heirlooms are harder losses to bear. In her attic, she had a baptismal gown used for every generation since her great-great-grandmother. During the holidays, she expects to mourn the family’s decorations. But they move on.

The community’s recovery from the fire will take stamina, Karen says. “I really hope that the energy and caring and support stay for the long haul, because it’s going to be a long haul.”

Sam Scott is the senior writer for Stanford.

‘Tell Us About a Relationship That Has Lasted Since Stanford’

At Reunion Homecoming, we asked alumni about the ties that can’t be broken.

Marty Hartigan lost his limbs. Then he cheered up his friends.