‘Tell Us About a Relationship That Has Lasted Since Stanford’

At Reunion Homecoming, we asked alumni about the ties that can’t be broken. 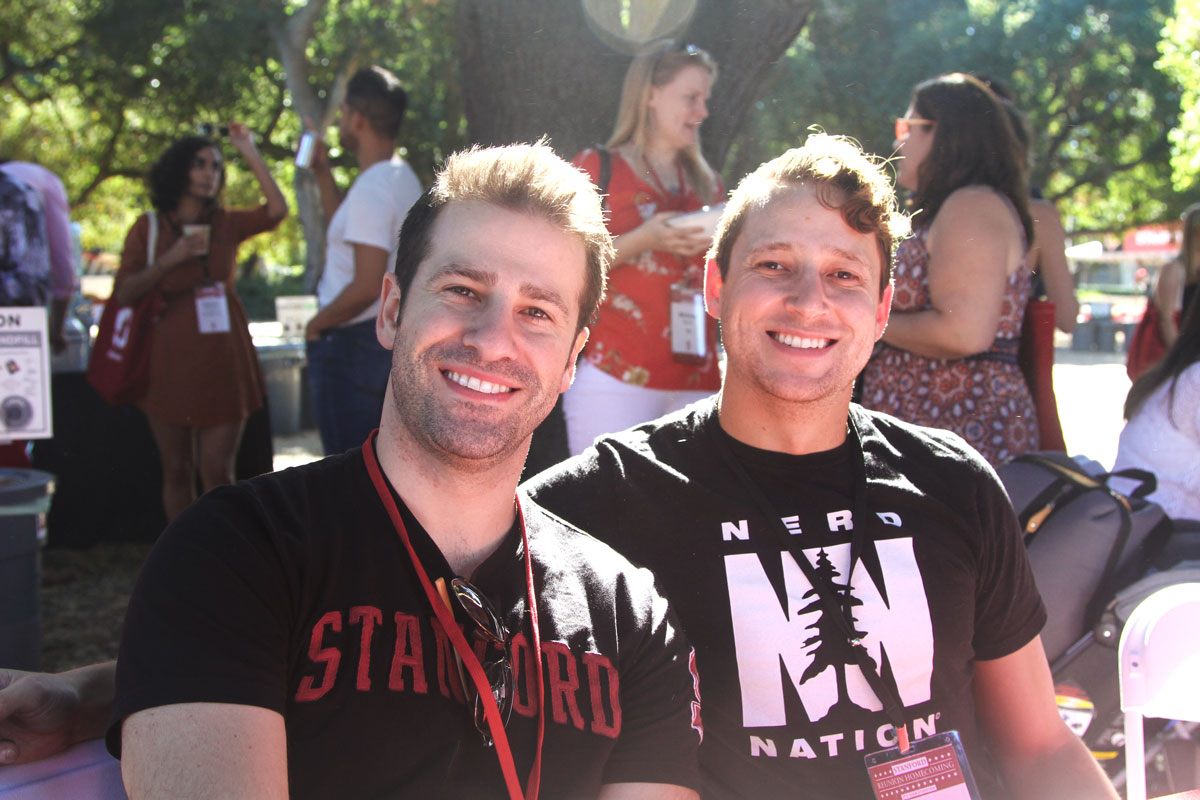 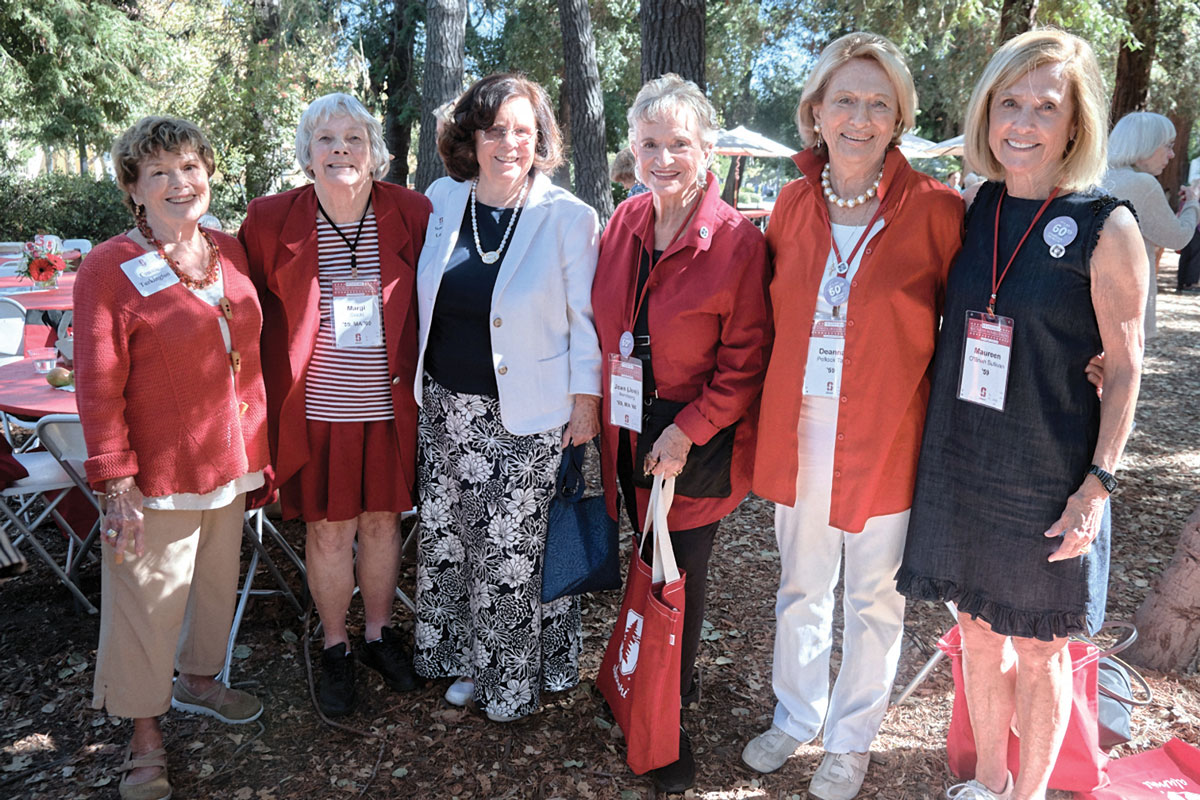 Sonya Davison Lamb, ’59
“In our class, we were two sets of Dollies, two different years. [When] we were in our late 30s, one of them contracted breast cancer, and she said, ‘I need support.’ And so all the Dollies got together every two weeks or every month for the next two years. We gave her that support, talking about everything, what it was like, what kind of funeral—everything. It really brought us close. And that remained, and grew deeper, over 60 years.” 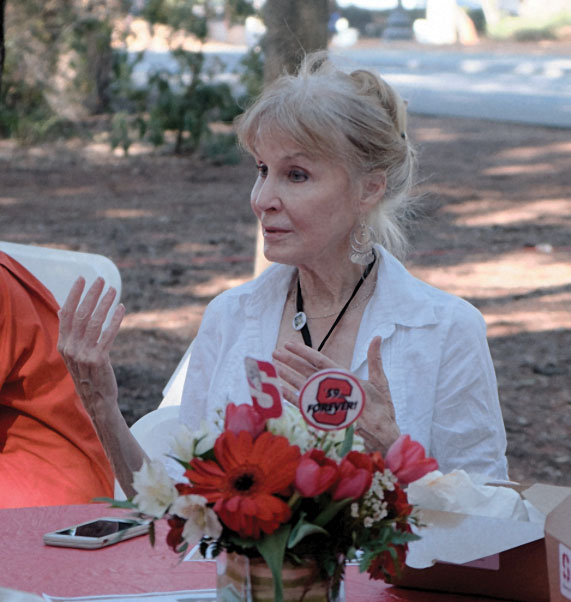 Holly Sawyer, ’59
“We were together as roommates our sophomore year, and we’ve been in touch ever since. Town & Country Village was new at the time, and we used to sneak out of the dorm in our pajamas, and go and have ice cream. We thought that was so devilish, so outrageous. Those are the lovely things you remember.” 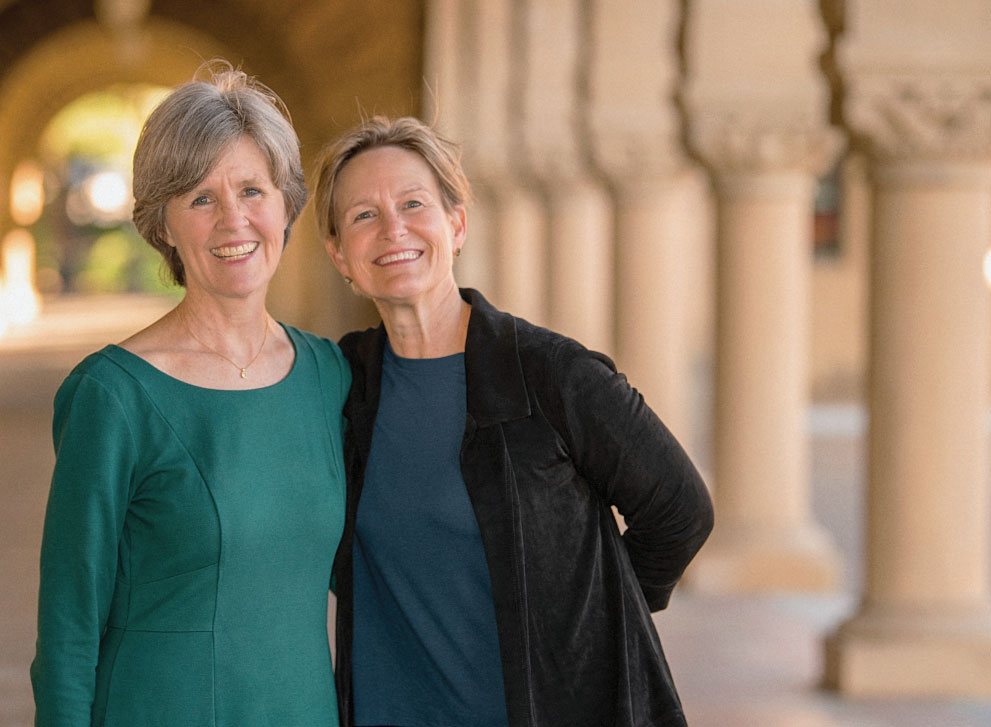 Joan Hotelling Passarelli, ’84
“Teri [Thomson Randall, ’84, MS ’85, right] was my ‘best woman’ in my wedding to Ben, ’81, the same summer we graduated. We supported each other as I stayed here in Silicon Valley and she lived in places like Chicago, Austin, Santa Fe and now Seattle, pursuing different degrees and careers. Although our paths have been very different, our friendship has always been there, a source of love and laughter through all the years.” 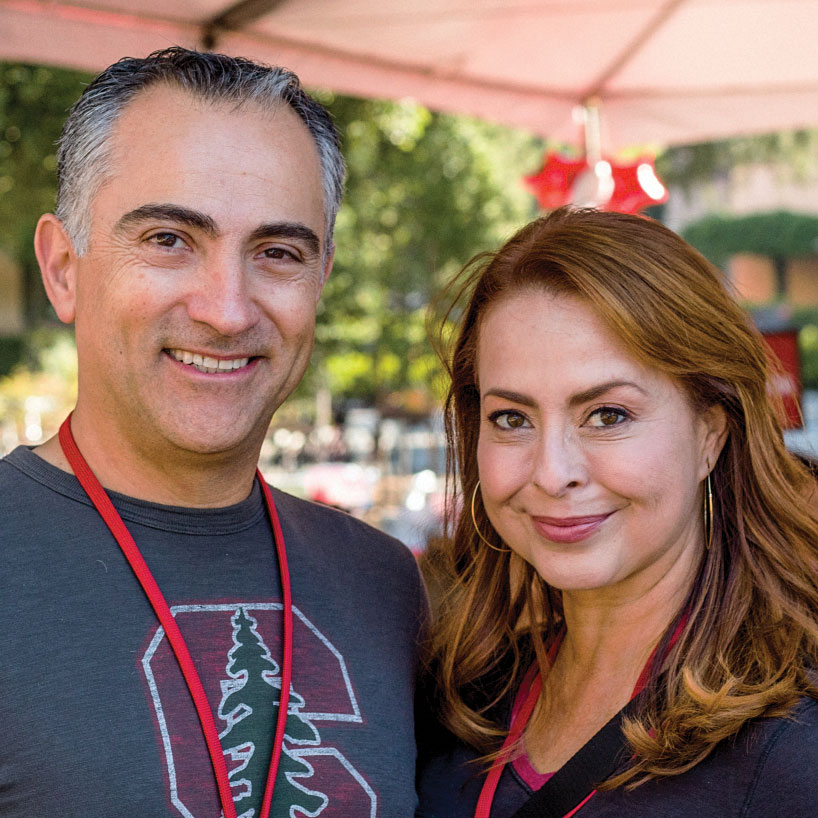 Rene Robles, ’94, MS ’96, and Veronica de la Cruz, ’94
“We met freshman year in Casa Zapata. We were both from the LA area, so the first thing you do is meet the people from your area because those are the people you’re going to be driving home with. We kind of grew up together. He’s a techie, I’m a fuzzie. We had a good balance. Our most memorable moments at Stanford revolve around Casa Zapata, El Centro Chicano. They helped us be successful here.” 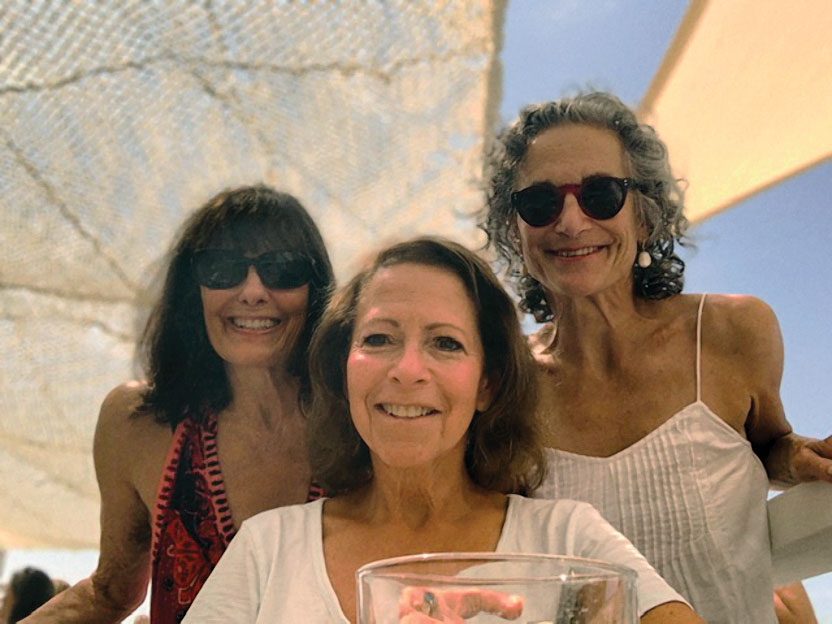 Melinda Sacks, ’74
“Since we were best friends at Stanford, my classmates Gail Block Harris [’74, JD ’77] and Barbara Lane [’74] have remained the ones I call first to report both emergencies and milestones. Who knew back when we were nude sunbathing on the roof of the women’s gym while eating pineapple or cramming all night for finals that the bonds we formed would be lifelong.” 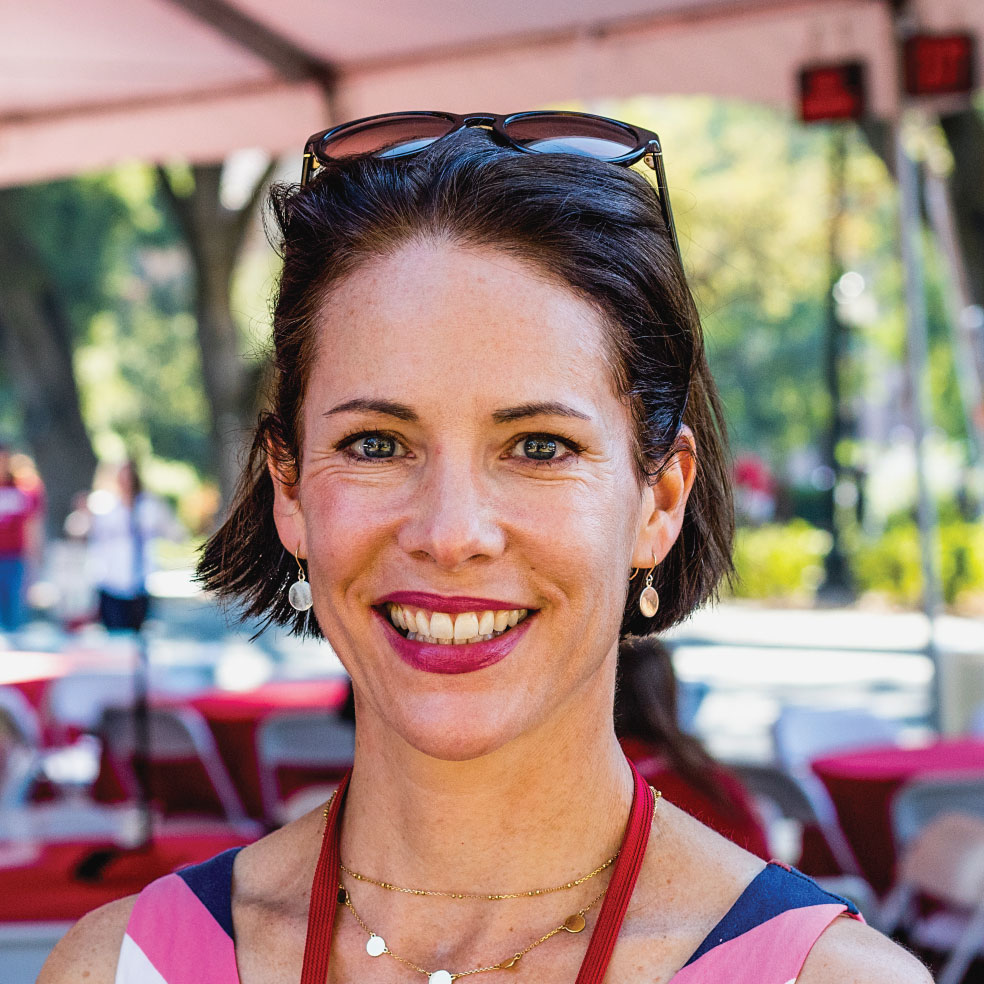 Beatriz Chantrill Williams, ’94
“On a visceral level, the smell of eucalyptus. Whenever, anywhere I go, I smell eucalyptus, I’m home. I’m back on campus.” 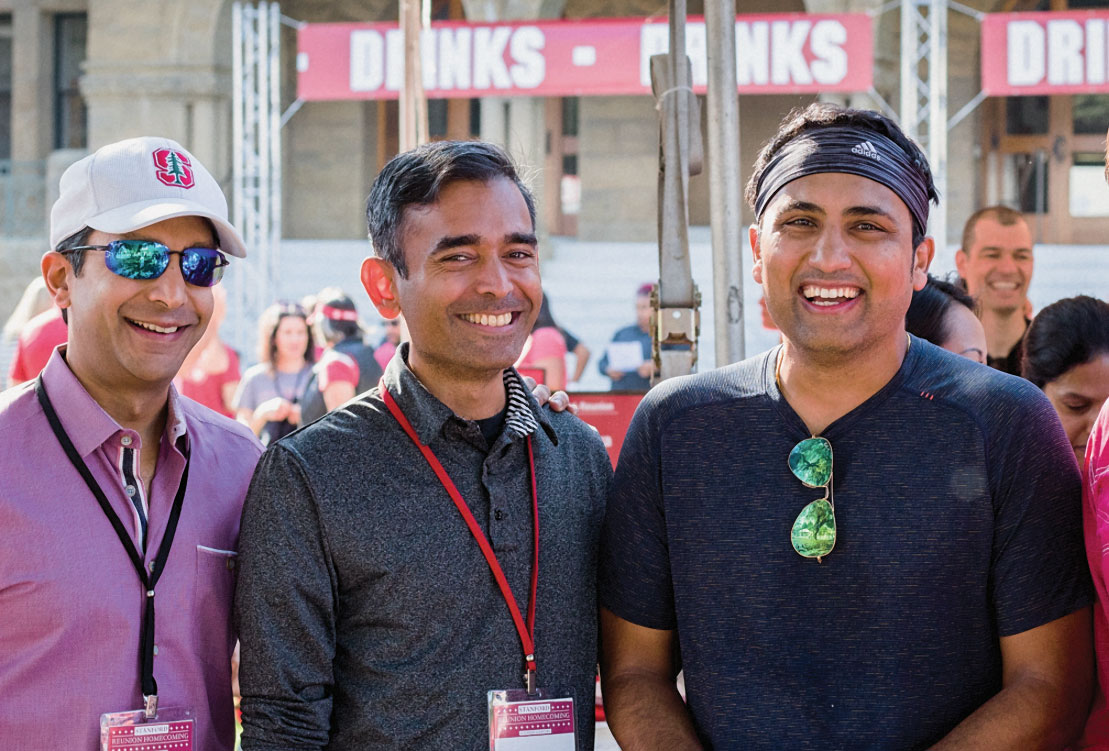 Hemanth Parasuram, ’99
“We were all in Sanskriti [now Stanford South Asian Society] together. We had a great time. We threw cool parties [and] had a cultural event every year called Mela. There were probably 150 participants—it was a big show. It was fun.” Left to right: Akash Deven Garg, ’00, MS ’00, Anoop Kumar Sinha, ’96, Parasuram. 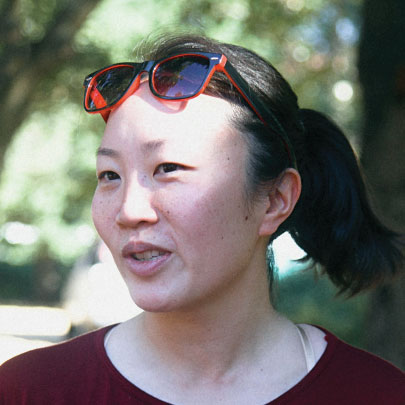 Michelle Teo, ’14, MS ’14
“For me, it would be the women’s rugby team that I was on for four years. That relationship is still meaningful for me, and I plan to meet some of them while I’m here.” 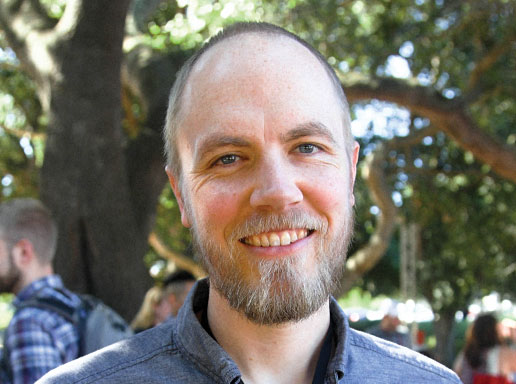 Brian Scoles, ’09
“A whole set of relationships that have been very meaningful started when I moved to Synergy my senior year. I really found a great community there. I lived with a lot of those people in the years after leaving Stanford, and we created other communities in Palo Alto and in the East Bay. . . . A lot of energetic and open-hearted people that have just been a joy to spend time with.” 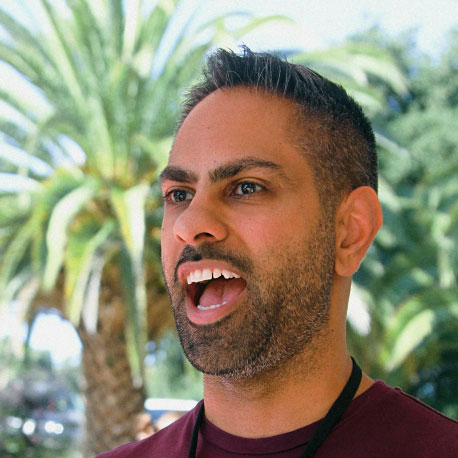 Ramit Sethi, ’04, MA ’05
“One of the relationships that stands out to me is with one of my professors who was a researcher here, BJ Fogg [MA ’95, PhD ’97]. I worked with him for five years. He taught me how to run a meeting; he taught me about psychology; he taught me about life. Now I’ve known him for 15 years. I invited him to my wedding last year. It’s just been a blast keeping him as a mentor for all those years.”

Nancy Johnson Sicotte, ’53
Our bridge club was started in 1956 when several of the women from the classes of ’53-’56 were still living on or near the campus because their husbands were in grad school. At the beginning we actually brought our babies with us to bridge. Some child was always crying or had to be fed, so that became impossible. We started getting sitters. At first the refreshments were dessert and coffee. A decade later that changed into a luncheon. Now we are mainly over 80 and we are still doing luncheons and meeting every other Tuesday. Our current group has six Stanford grads. A great group of friends! 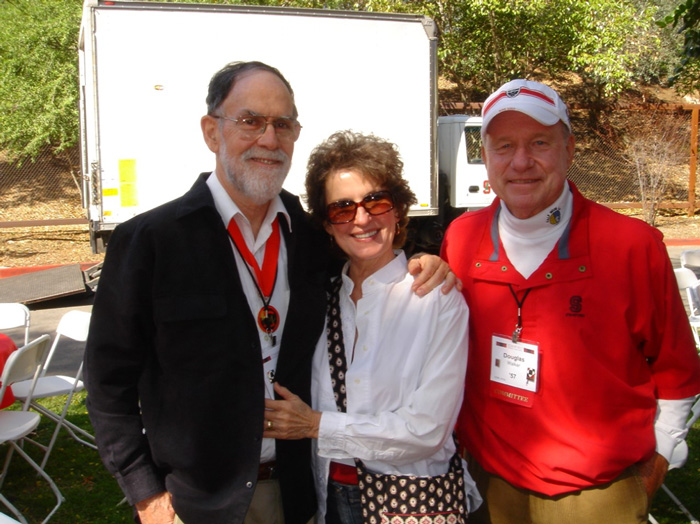 Richard Mariscal, ’57, MA ’61
Here is a picture of me and my wife, Elaine, with my classmate and longtime Stanford buddy Doug Walker on the occasion of our 50th reunion in 2007. Today, some 66 years after Doug and I first met in 1953 as Encina dormmates, we still keep in regular touch by snail mail, when he sends me newspaper clippings of the details of each Stanford football game, and at other times of the year when anything of note regarding Stanford appears in the West Coast news media.

William Goldie, ’69
I graduated in 1969 with a bachelor’s degree in psychology. I went off to medical school and married. My wife went with me to Johns Hopkins where I did a pediatric internship, but she could not deal with being a pediatrician’s wife and demanded a divorce. I then came back to Stanford for a neurology fellowship with a focus on pediatric neurology. I was in severe financial and even legal distress [when I was taken] under the wings of a wonderful woman who was assistant administrative manager of the Department of Pediatrics here at Stanford. She took pity on me as I served as “chief resident” in pediatric neurology where there was one resident—me. I was then able to get a fellowship in EEG at Mass General, and I invited her to come with me. She flatly stated: “Only if we get married!”  We found a nice judge who married us in his office with my brother and her sister as witnesses. That was 1977. We have been together ever since. We did a year in Boston, then seven years in Houston, where I was at University of Texas Health Science Center, then three years at Children’s Hospital Los Angeles, and now 27 years here in Ventura, Calif. We had two boys, one who died in a motorcycle accident, and the other now working with me as an EEG technician in Oxnard. We still enjoy visiting Stanford, but are overwhelmed by the changes.

Keith Van Sickle, ’80
I am currently having a lot of fun working with my old roommate, Doug Schuetz. I’m Class of ’80 and he’s ’81 and we were roommates back in the late ’70s. We’ve stayed in touch over the years and it’s always good to hear from him. I’ve written a couple of books, and a big audiobook company turned the first one into an audiobook. Shame on me—Doug is (among many other talents) a voice actor and he was disappointed that my book had been recorded by someone else. But never fear, my second book needed a reader, and who better than Doug? So we’ve been working on it for the past month or so and having a blast. He’ll record chapters and send them to me and then we'll talk about them. He’s a terrific talent and always was—he wrote and acted and directed for Gaieties back in the day. When he records one of the funny passages in my book, I marvel at how it’s even funnier with him reading than it is on the page. At the end of the book there’s a short biography of me. I asked Doug if he’d like to add one for himself and this is what he recorded: “Doug Schuetz, the reader, was Keith’s college roommate.”

Carol Hurwitz Polk, ’45
Peter, ’45, and I met as sophomores and married in October of 1945 in Boston, where Peter’s ship, the North Carolina, returned after the war. He had received his Stanford degree in absentia at the 1945 graduation, having had all his credits from summer school, the V-12 Navy College Training Program and Midshipmen’s School transferred to Stanford. He worked for the Broadway department stores in Los Angeles and Sacramento until he retired 35 years ago. We worked in real estate in San Clemente, Calif., for 10 years, then moved to Dana Point, Calif., where we keep as busy as possible—including helping with reading at a local elementary school. I was a Cardinal, a member of Cap & Gown, a Roble sponsor, the War Board head and in many other activities. I was the Class of ’45 correspondent for STANFORD magazine for seven years. Peter and I have an annual music award in our name. We have attended every class reunion and agree that once you go to Stanford, part of your heart stays there. We are proud to be connected.

Lucy Butler, ’78
My Kairos roommate, Antoinette “T” Terry Bryant, ’78, and I stay in weekly contact! We were in the English and drama departments together and spent long nights rehearsing, writing papers and laughing hysterically about nothing until 2 a.m. That has not changed—we are both in the film business, writing, producing and directing documentaries and features. We make each other laugh as hard as we did when were 19. And because we have been listening to each other for decades, we have a lot of tolerance and mutual respect. 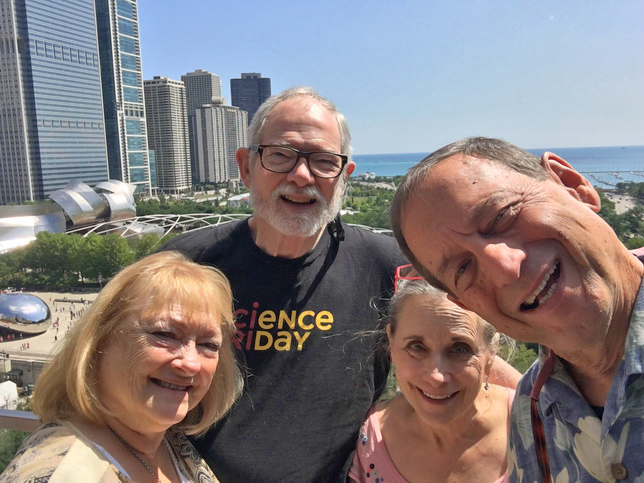 Lance Lawson, ’72
I am still in touch with most of the members of my Germany Group in 1970, but one friendship that started then has lasted 50 years. I suppose I met Gary Clark, ’72, along with the rest of Beutelsbach XXV. I didn't know anyone going in. In fact, he and I were both junior year transfers to Stanford. During fall break in Europe, I spent a week driving from Istanbul back to Germany with with Gary and two others. We were in a VW Beetle so we all got to know each other pretty well.

We stayed in touch after graduation. Then, when I went to graduate school at USC, I lived with Gary’s parents until a room opened up in the house he was renting in Pasadena. When I went to work at a company in Alabama, the founder knew enough about Gary to recruit him, too, so we wound up working together in Huntsville for a couple of years. We spent a lot of time together, including a trip sailing from Miami to the Bahamas.

After I came back to California, where I’ve lived since, we have not been close geographically, but we have stayed close friends. While he and his wife, Helen, lived in California for a few years, we managed to tailgate for all the home games. After they returned to Alabama, we continued talking frequently and enjoyed watching each other’s children grow. As a recent highlight, Gary and Helen joined my wife, Marla, and me in Chicago to celebrate my 70th birthday (pictured). Gary has been an intellectually curious friend that I enjoy sharing ideas with. His lively wit keeps all of us on our toes. He and Helen have been good enough to come California occasionally and they are always welcome to stay with us as long as they can stand us.