Meet the New and Improved Me 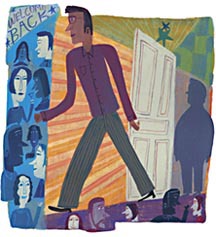 The approach of my first class reunion is bearing down on my psyche with ever-increasing intensity. It’s slow, steady, unstoppable—not unlike my mother on her riding lawnmower as she makes laps around the aboveground pool in our backyard. I can run, but I can’t hide.

If it were just another wedding I had to skip or another grad school graduation I wouldn’t attend, I could ignore it and ride out the remaining months at a pace that might indicate I’m cruising through life on a John Deere tractor all my own. But like shoulder pads in a Dynasty rerun, signs of the reunion are everywhere I turn. Almost weekly, reminders find their way to my mailbox. Every conversation with friends includes some question about who’ll be there and whose hair loss is worse than mine at this point. To add to the pressure, I have roughly two weeks left to put together a page for my class book.

It’s the page that’s driving me crazy—the very idea that my last five years can be distilled into a 5-by-8-inch box under the simple heading “Life Since Stanford.” My problem is not that I refuse to be put in a box; my problem is that my recent past fits all too easily in that little space with room to spare. The real challenge is deciding whether to follow the classic “here’s my résumé” format or the slightly less popular but equally respectable “no, seriously, this isn’t a personal ad” layout.

Either way, this process has forced me to recognize that I’m simply not good on paper. There’s been no great job, no graduate degree, no time spent selflessly slaving away at a nonprofit in some interesting part of the world. There’s no child on the way, no pending nuptials and, to be honest, no one I’d even pend nuptials with. What, then, should I put in my box?

I’ve done exactly two significant things since I left Stanford. The first was telling my Southern Baptist parents that I’m gay. (My mother still occasionally pretends that conversation never happened.) The second was losing weight roughly equivalent to the body mass of your average Warner Bros. starlet. Obviously, neither of these things would make me the alumnus of the month, and neither fits very well in that little box; but in my world, they’re both on a par with getting an MBA.

So I’ll be showing up on the Stanford campus a little behind in the game of life. It won’t be the first time. Almost nine years ago, I made my first appearance there with possessions that included 22 Streisand CDs, one Brian Boitano poster and a pair of black jeans. For that and much more, I owe an enormous apology to my freshman roommates. (Sorry, Joe, Raj and Gene.)

Thankfully, I’m not the same guy I used to be. Through some miracle of transformation and overexposure to Neiman Marcus, I’ve become an odd blend of personal shopper, lifestyle consultant and walking Zagat guide, though currently these services are available only to my friends. It’s nice. But what’s nicer is that as I threw out the pastel plaid flannels, shed the weight and pawned the complete Michael Bolton, I found out I actually sort of like myself. Which means that, at my reunion, lots of people who knew me before will be meeting me for the very first time.

All right, I tell myself—I’ll fill out my page. I’ll probably even include a picture proving I’ve recently upgraded from being a single man to being a single man with dogs. And I’ll show up at the reunion fully prepared to encounter happy couples and business cards littered with titles like vice president. And I’ll have a great time. It might take me five more years to reach the point where I’m good on paper, but it’s taken the last five for me to reach the point where I’m great in person. And that’s just not something you can easily put in a box.

Michael Norman, ’98, has been hiding out near Fresno, Calif., with his television and two dogs.