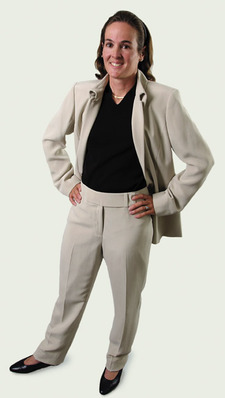 As director of public safety, Laura Wilson, ’91, oversees a staff of 32 deputies and 20 community service officers who made 417 arrests and issued 42,000 parking tickets last year. The 36-year-old triathlete is the first alum to serve as campus police chief and the first woman in the job. Wilson reports to Stanford CFO Randy Livingston, ’75, MBA ’79, and she and her officers receive their police powers through a memorandum of understanding with the Santa Clara County sheriff. “In essence,” she says, “I answer to two people—Randy and the sheriff.”

So she always wanted to be a police officer? “Absolutely not,” Wilson told deputy Nick Brunot 11 years ago. Brunot was responding to a building alarm Wilson had inadvertently set off while working odd hours in the athletic department, and told her he thought she’d make a good cop. Several alarms and several conversations later, she reconsidered.

Standing tall at 5-foot-2. “I was probably prouder of finishing Police Academy than I was of graduating from Stanford,” the former human biology major says. “I was intimidated by the paramilitary, law-enforcement, snap-to-attention atmosphere, and I wasn’t sure how, being a petite female, it would work.” But Wilson scaled the six-foot walls at boot camp and was appointed a deputy sheriff in 1992. She was promoted to sergeant, then lieutenant in the investigations division, and in May 2002 was named to succeed Marvin Moore, who died suddenly of a heart attack.

Multitasking required. One minute Wilson will be working on bioterrorism threats, and the next it’s parking issues or personnel or a fire department contract. She is required to make campus crime statistics public under one piece of federal legislation, but another restricts the kinds of information that can be released—even to parents. “I am sufficiently challenged and would like a dull day once in a while.”

The citizens have opinions. Lots of opinions. “One thing about Stanford: you get feedback,” the chief says. “People are more than willing to call you and tell you about a car stop. We teach our officers that they need to be on their toes and need to be able to speak with someone who’s homeless or with someone who’s won a Nobel Prize.”

How to tell the officers apart. Those would be (unarmed) community services officers in the light blue shirts and dark blue pants, and sworn deputies in the tan shirts and green pants. The one in jeans and a turtleneck is probably Chief Wilson. “When I’m meeting with students, I like to dress down because it’s maybe a little less intimidating.”

Cops make good dining companions. Wilson asks each of her deputies to have lunch or dinner with a group of students each month. “I want to remind my staff that the vast majority of students don’t get in trouble, and I want students to know that people have lives outside of being police officers.”

The department’s two new BMW motorcycles will be freed from the garage. Someday. “I won’t let anyone go to the academy and learn to ride them right now because we’re short-staffed and I can’t afford to have anyone get hurt [there],” Wilson says. “I sent a really good rider to a bicycle training class and he broke three ribs.”

Oh, and Lake Lag is not a parking lot. Many of last year’s 89 vehicular burglaries involved golf carts, some of which ended up in the lake’s reedy shallows. “Usually, it’s a joyriding situation,” Wilson says. “But often the cart is someone’s transportation, especially someone who’s disabled, and bright students are out there having fun at someone else’s expense.”

Leader of the Park