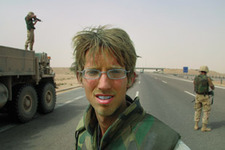 Josh Davis found out how closely entwined a reporter and a military battalion can become when, as a roving war correspondent for Wired magazine, he hitched a ride with a convoy of supply trucks returning from Baghdad to Kuwait. “Unfortunately, they were short-staffed,” says Davis, “and I was placed in the last vehicle with an M-16 and a radio. My job was to maintain communication with the lead vehicles. If there was a problem, I was to radio it in—‘and if there’s shooting, you’d better shoot back,’ the grizzled sergeant told me. I refused to take the gun, replying that I was a noncombatant. ‘We’ll see about that,’ he said. Our empty convoy did not come under fire, but every time we pulled over to fix a broken-down truck, I had to consider what I would do if it did.”

Feathers in their Caps