Life in the dorm that wasn't. 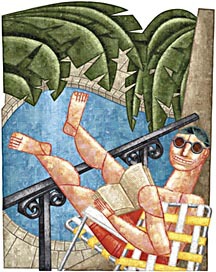 After 20 minutes, the sauna was becoming unbearable. A dip in the pool seemed in order, though its year-round 85° waters hardly chill one’s exterior. En route to the pool, I made a quick pass by the clubhouse to see what was left of the continental breakfast buffet. A fluffy croissant and a plate of strawberries were the spoils of my detour. I splashed in the pool, then grabbed a bagel for the road, heading to the tennis courts to get in a couple of sets before class.

It was a typical morning at my senior-year “dorm.”

Okay, so typical might be a stretch. But such episodes of extravagance were not altogether rare during my time in the Sharon Green Apartments in Menlo Park, a complex of 300 luxury units where, each year since 2000-01, some 60 students have had the chance to justify every elitist stereotype hurled at Stanford by its peer across the Bay.

I was assigned to Sharon Green in its final year as an undergraduate residence, forced into a world of suburban elegance by Stanford’s student housing crunch. Three years ago, with every study room and utility closet on campus already occupied, the University began shipping residents off campus. Given the housing office’s solutions up to that point, a likely destination might have been a row of cardboard boxes under a Highway 101 overpass, with two people in each box. But instead, Stanford sent the surplus up Sand Hill Road to Sharon Green, only to outdo itself a year later by placing additional students in the even more chic Oak Creek Apartments down the street. That place has an on-site salon, for God’s sake.

I thought I’d scored big my junior year when I landed a two-room double; never mind that it was in the notoriously antisocial Potter House. But my 1,100-square-foot, two-bedroom, two-bath apartment in Sharon Green made that place look like a closet.

Actually, that’s a poor analogy. The closet in the apartment’s master bedroom was way bigger than my Potter room.

There was, inevitably, a clash of worlds as Stanford kids invaded Sharon Green. After all, it’s the kind of place where you actually feel bad when you spill stuff on the floor or some friends put a hole in the wall, and where posters proclaiming the greatness of beer seem conspicuously alien. An exasperated Palo Alto police officer put it succinctly while breaking up a late-night party at my friends’ place at Oak Creek: “This isn’t a goddamn dorm room.”

We did our best to turn our apartment into an acceptable college pad anyway. Our furniture comprised beach chairs, various inflatable objects and anything else we could find discarded on neighborhood sidewalks. We broke our garbage disposal the first week, giving our kitchen the compulsory stench, and we filled our cabinets with the finest china the campus dining halls had to offer. An empty keg of beer stayed on our balcony so long that I can’t picture the place without it.

But it was all for naught. There was no way to make Sharon Green into a home suitable for Bluto and the gang. And the atmosphere was just too classy to leave us college kids untainted.

The girls below us gave up early and started having dinner parties—with wine!—featuring multicourse meals whose preparation required more than just adding water. Their apartment looked like it was professionally decorated, and you could tell what color their carpet was supposed to be. Soon, they were complaining more than the old couple down the hall when our parties dragged on toward sunrise.

My roommate and I eventually succumbed as well. We started subscribing to the Economist and the New Yorker. We snubbed Safeway for upscale Andronico’s and bought dark beer and cheeses that smelled worse than the garbage disposal. We even cleaned our bathrooms once in a while.

Worst of all, I began to think this was what “real world” living would be like. That notion was cruelly shattered in May by just one hour of combing the area for a postgraduation apartment that would rent for, say, $600 a month. I don’t know how much my stay at Sharon Green cost Stanford, since we only paid the campus room charge, but our unit normally lists at more than $2,000. Guess it’s back to Pabst and Easy Cheese for me.

On the bright side, there was wisdom to be gained from all those old (read: over 25) people living around us.

Most residents fell into three basic groups: 80-hour-work-week Silicon Valley types, families with young children, and senior citizens. All are mortal enemies of the college student who has no concept of midnight being “late.” Our neighbors never seemed to share any of our interests, such as whether one can reach the pool by jumping from a third-floor balcony (answer: almost) or how many empty beer cans fit on some guy’s Boxster in the parking lot (87).

And so, on the cusp of full-blown adulthood, we learned three important life lessons: don’t work long hours, don’t have kids, and above all, don’t get old.

Ezra Callahan, ’03, a symbolic systems major from Pasadena, Calif., has joined the working world as business manager of the Stanford Daily.