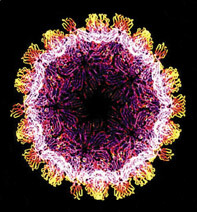 Think of it like the Hubble Telescope: scientists apply for time on the equipment to perform their unique studies. Except, in this case, the equipment is firmly grounded along Sand Hill Road, and the matter being eyed is microscopic.

In the laboratory, a beam of electrons travels a quarter of a kilometer around a circle at nearly the speed of light, emitting X-ray radiation the way a bicycle tire sheds rainwater. The X rays are directed to workstations, where they shine like ultrapowerful flashlights onto materials under investigation.

“You can use synchrotron radiation to measure the arrangement of atoms and how electrons are behaving. The information can tell you how and why a chemical or biological reaction is occurring,” says chemistry professor and SSRL professor and director Keith Hodgson.

The pioneering facility got its start 30 years ago, using the cast-off radiation and high-energy physics technology of the Stanford Linear Accelerator Center. When it opened as the Stanford Synchrotron Radiation Project, it was the first synchrotron X-ray user facility in the world. These days, SSRL generates its own electrons and is undergoing an upgrade that will make it a state-of-the-art, third-generation synchrotron.

The lab has revolutionized solid-state physics, structural biology, environmental science and some areas of chemistry, according to Nobel Prize-winning SLAC director emeritus Burton Richter. Today, its research also encompasses medicine, materials science, astronomy, geology and engineering. SSRL is a division of SLAC and a national laboratory funded by the Department of Energy and the National Institutes of Health.

Every year, more than 200 labs, universities and companies win use of 27 experimental stations. Their work keeps the stations running 24 hours a day, seven days a week, nine months a year.

“It’s a different sociological environment than a traditional lab,” Hodgson says. “It’s easy to run into your neighbors because you’re so tired you fall into them. Unquestionably, it’s formed new collaborations.”

It’s also closely linked to the main campus. Gordon Brown, for example, chairs the SSRL faculty and is a professor of geological and environmental sciences in the School of Earth Sciences.

“I have my own lab on campus, and SSRL is like a second, extended lab for me and my students,” says Brown. At SSRL, his molecular and environmental science group “tackles some messy environmental problems,” he says, such as arsenic in drinking water and nuclear-waste storage. “We try to understand the chemical forms of these various contaminants in different environments.”

Sometimes, Brown’s experiments reveal good news: that a particular chemical form is not toxic. At the nuclear site in Hanford, Wash., for example, some uranium is present as uranyl silicate, a relatively insoluble mineral that effectively removes the radioactive element from the biosphere. On the other hand, Brown and his colleagues found last year that the most toxic, carcinogenic form of chromium has leaked or spilled out of Hanford’s storage tanks into the soil, the groundwater and the nearby Columbia River.

A major mission at SSRL is to solve the 3-D structure and function of biologically important proteins, using a technique—now the main one worldwide—primarily invented by Hodgson. “You’re seeing the chemistry of atoms and molecules. You couldn’t touch this problem without synchrotron radiation,” Hodgson says.

Using this method, Roger Kornberg, PhD ’72, professor of structural biology, recently worked out the structure of RNA polymerase, the largest protein ever deciphered. “We could see all the details of how RNA polymerase unwinds the DNA double helix, assembles RNA along one of the two strands, and how the RNA is released and the DNA comes together again,” says Kornberg. The work helps scientists understand “how a complex multicellular organism is formed and how it functions.”

But SSRL won’t stop there. Hodgson is now working on a different kind of synchrotron science: an X-ray laser fast enough to “essentially take motion pictures of chemical reactions” that will shine 10 orders of magnitude brighter on the microscopic universe.

Letters To The Editor