The Man Who Got Them In

Around Campus he was known simply as "Dean Fred." In 1984, the New York Times called him the "dean of deans." For a generation of Stanford alumni, he is remembered for his personal touches—he knew each of them by name, wrote handwritten notes ("Great!") on their letters of acceptance and is credited for opening a door that changed their lives. Fred Hargadon, dean of admission at Stanford from 1969 to 1984 and then at Princeton University from 1988 to 2003, died on January 15 at his home in Princeton, N.J. He was 80.

Hargadon was born in 1934 in Ardmore, Pa. After completing high school, he worked briefly for the Atlantic Refining Co. and the Postal Service before serving in the U.S. Army. He graduated from Haverford College in 1958, one of the first in his family to earn a degree. He went on to do postgraduate work at Harvard and Cornell, and began his career as a political science professor at Swarthmore College. He was Swarthmore's dean of admission from 1964 to 1969 before coming to Stanford.

While at the Farm, he drove around campus in a convertible with a license plate that read "ADMITS." He believed in a holistic evaluation of student applications, and was well known for admitting students with a broader range of test scores than other leading colleges at the time.

"He was a pioneer in the field of admissions because Fred believed in the value of diversity in every sense of the word before it became a buzzword," says Keith Light, '78, an associate director in the Yale admissions office. "He genuinely sought to create a class comprised of students not simply based on their academic credentials."

Light was accepted to Stanford during Hargadon's tenure and later worked with him as an admissions officer from 1980 to 1984. He also was a recipient of the infamous "Ouch" letter. Light explains: "All of us in the Class of 1978 who were admitted to Stanford received a letter from Fred with a handwritten 'Ouch' at the top because one bag of mail—the one containing many of our acceptance letters to Stanford—was somehow misplaced by the post office. So, not everyone got his or her acceptance letter on time. Fred sent the 'Ouch' letter to every single member of our class, making sure that we all knew we'd gotten in."

Win Reis, '88, now a strategy and business planning leader in the technology industry, was a member of Hargadon's last "greatest class ever," the affectionate moniker the dean conferred upon every entering class. "During spring quarter of 1985, I was with a group of students at the Old Union having a discussion with him. I was about to introduce myself when he called me out by name and asked a question about something on my application—a document he hadn't seen for at least 12 months. An amazing memory, simply incredible," Reis recalls.

When Mariah Burton Nelson, '78, was deciding where to attend college, it was Hargadon who cinched it. "Stanford was my first choice, but the women's basketball program was weak, so I was considering Cornell. Dean Hargadon called me in Phoenix to discuss my decision. When I complained about the basketball program, he said, 'I'd like you to come help build that program.' It was as close as women athletes got to being recruited in the 1970s, and it worked," she says. Nelson went on to lead the team in scoring and rebounding and later played for three seasons in the first women's professional basketball league, the WBL, a precursor to the WNBA. Today she is vice president for innovation and new product development at The Center for Association Leadership in Washington, D.C. 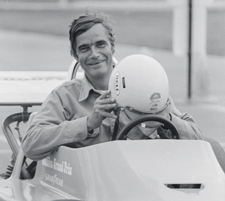 On an outing with alumni at Malibu Grand Prix in Redwood City. (Photo: Lex Passaris, '79)

Hargadon's influence often reached beyond the traditional role of an admissions dean. Lex Passaris, '79, a Hollywood director, maintained a friendship with Hargadon long after both left Stanford. "We first met during what we quaintly called a sherry hour at Stanford in the fall of 1975, my freshman year," Passaris says. "He was a frequent guest at such gatherings in the dorms, especially those housing all freshmen. He stayed to have dinner with us and continued to regale us with snippets and stories that were both educational and humorous.

"His assuring demeanor and wonderful stories put us all at ease and made us feel that if he thought so, we might actually belong there."

Hargadon is survived by his sons, Steve and Andy; two brothers, two sisters and five grandchildren.

Julie Muller Mitchell, '79, is a writer and an editor in San Francisco.

In Praise of True Student-Athletes

Leadership and success, on and off the field.