All those brainstorming sessions could be making your ideas worse.

If you want to come up with better ideas, you should brainstorm more, right? Not according to research by Melanie Brucks, PhD ’19, and Graduate School of Business associate professor of marketing Szu-chi Huang. Brucks first became curious about the relationship between practice and creativity because she wanted to come up with better ideas herself. “There’s a ton of research out there that shows how practice seems to help with everything if you want to improve performance,” she says. “I thought, ‘Well, OK, I can just practice creativity and I’ll get good at it.’”

What her research found, however, was that more brainstorming sessions actually led to fewer unconventional ideas. The reason practice works for most skills, says Brucks, is that it reinforces certain pathways in the brain while de-emphasizing others, essentially training the brain to become more efficient and focused. But more focused can mean less flexible—not great for generating innovative ideas. Super-disciplined, mastery-focused readers shouldn’t despair. The researchers say you can still “practice” creativity, as long as you do it in a way that takes you out of your comfort zone and isn’t routine. (Like by doing improv.) Night owls, take note: Study participants who did their brainstorming late at night generated the worst ideas. “People are prone to habitual thinking late in the day. They’re even less likely to diverge from already well-traveled cognitive pathways,” says Brucks.

Stop the ride please, we want to get off.

The U.S. has never faced “the nightmare scenario of having two different individuals claiming to be president” after the lawful determination of an election’s outcome, says Stanford historian Jonathan Gienapp. Of course, there’s a first time for everything. Gienapp spoke with Stanford News Service about the history of contested elections in the U.S., what guidance the Constitution offers and how a contested result could play out. Not comforting: “One lesson the Constitution contains is that our constitutional system is only as good and strong as our commitment to its deeper ideals. If our institutions are rotten, if our norms are broken, if our sense of democratic commitment is abandoned, it does not much matter what the Constitution specifies or what precedents it has seemingly established.”

If you’re glued to the polls right now, Stanford political scientist David Brady, emeritus professor of political economy and a senior fellow at the Hoover Institution and at the Stanford Institute for Economic Policy Research, outlines nine things you should know if you want to be a smarter consumer of election polling data. And to help you get through the next seven days, the Stanford Election Support website offers five ways to cope with election stress. No. 3 is practicing self-compassion: “It’s OK not to be OK. Feel what you feel.” 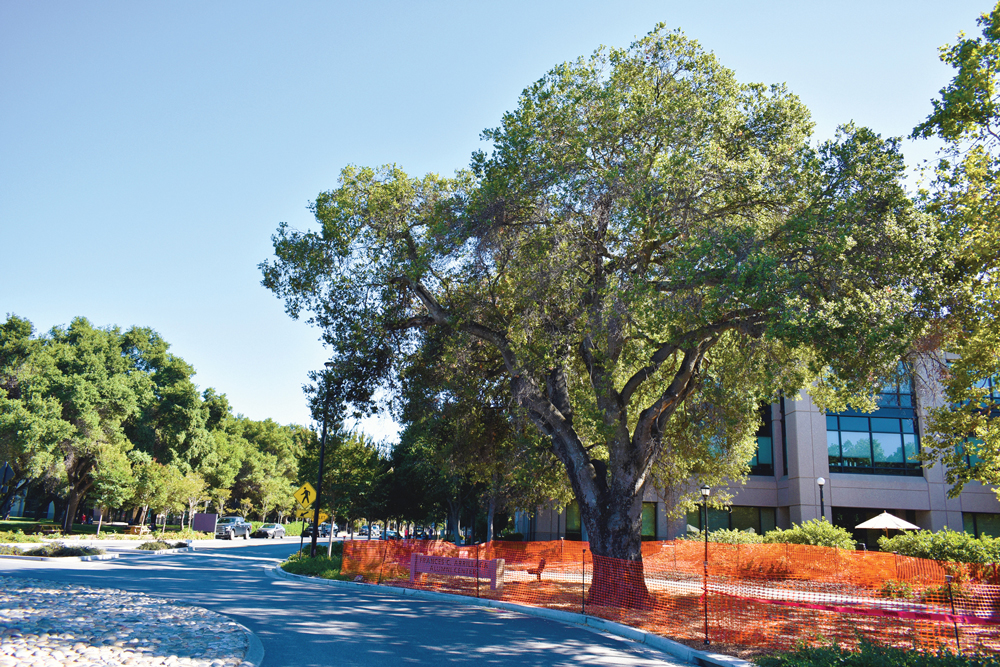 On the night of November 16, 1931, Gordon Hampton, ’35, was a nervous freshman tasked with guarding the Big Game bonfire pyre against a raid by Cal students intent on burning it before the rally. Some accounts say Hampton was perched in the coast live oak tree on the southwest corner of Galvez Street and Campus Drive, while others put him under it, but what’s known is that around 3 a.m., Hampton blasted his whistle in warning as the intruders attacked. “All hell broke loose as Encina Hall Frosh spilled out, engaging the enemy in fierce combat, with their bare hands pulling fire brands off the pyre, and thereby successfully defending the bonfire and saving the day (night),” reads the bronze plaque that was dedicated at the base of the tree in 1997. The Gordon Hampton Oak was removed this summer after the trunk was determined to have an unsafe level of decay, but the story of that fateful night lives on.

Orange means the Cardinal gets a green light.

Santa Clara County has moved into the State of California’s orange tier, considered “moderate” for coronavirus spread, which means, among other things, that football can come back to campus. No fans at games, of course, and practice is in groups no larger than 75, but coach David Shaw, ’94, told the San Francisco Chronicle that the players know “it’s not just for county health, but also for their individual health for us to follow these guidelines, and that it’s the best way for us to get an opportunity to play the sport that we love.” The football team’s training adaptations during the off-season included an open-air weight room, social distancing and a max of two players sharing a ball (a center could snap to a quarterback, but then the ball would need to be sanitized). The Cardinal opens its season at the University of Oregon on November 7.

This year, high-risk Halloween activities are out (so, no haunted houses or trick-or-treating beyond your bubble), but there are still plenty of ways you can celebrate safely. Stanford Children’s Health pediatrician Anita Juvvadi says costumes with masks are likely to be popular, but she cautions that most costume masks won’t sufficiently protect against the spread of this year’s real ghoul, COVID-19. So if you’re going out, be sure to wear a standard cloth face mask that covers the nose and mouth. And for goodness’ sake, don’t wear a costume mask and a COVID mask, because that could make it hard to breathe. Excited yet? Good, because here are seven low-risk activities for your COVID-19 Halloween bucket list, and some spooky Stanford-themed conversation starters for the trick-or-treat trail or your Halloween costZoom party.

Last year, this hematology/oncology fellow’s 2-year-old son wanted to be a pair of pants for Halloween, and his costume broke the internet.

Gimme a verb ending in -ing. Two new studies by artificial intelligence researchers find that advanced AI systems can figure out linguistic principles by playing billions of Mad Libs–style fill-in-the-blanks games. “In a sense, it’s nothing short of miraculous,” says Chris Manning, PhD ’95, co-director of the Stanford Human-Centered Artificial Intelligence Institute. “All we’re doing is having these very large neural networks run these Mad Libs tasks, but that’s sufficient to cause them to start learning grammatical structures.”

Eating disorders have surged during the pandemic, and so have the tech tools for treating them. And when it comes to treating eating disorders, telehealth interventions may have some advantages over in-person treatment, says Cara Bohon, director of the Stanford Child and Adolescent Outpatient Eating Disorders Clinic.

“We Need to Stop Tiptoeing Around Race” is the first episode of a new Graduate School of Business podcast, Leadership for Society. Host and professor of organizational behavior Brian Lowery talks with leaders from Genentech and Omidyar Network, including Simone Hill, MA/MBA ’14, who are driving their organizations toward increased diversity, equity and inclusion. STANFORD magazine recently spoke with Lowery about his research on the psychology of privilege.

Two-time Olympic medalist Jessica Mendoza, ’02, MA ’03, is calling the 2020 World Series between the Los Angeles Dodgers and the Tampa Bay Rays for ESPN Radio, which makes her the first female World Series analyst on a national broadcast.