3-minute anxiety trick; what media multitasking does to your memory; election results

Cardinal in the House.

Congrats to the 11 alums reelected to their offices in Congress and to Mondaire Jones, ’09, the newest alum on the Hill. Jones will represent New York’s 17th District. He and Ritchie Torres, also of New York, will be the first openly gay Black congressmen. In state news, Josh Becker, JD/MBA ’98, secured a seat in the California state Senate, representing much of the San Francisco Peninsula. Lorena Gonzalez, ’93, also of California, and Peter Wirth, ’84, of New Mexico, were reelected to their state offices.

America continues to confront a big political divide, as last week's presidential election underscored. Stanford political scientist Bruce Cain and assistant professor of political science Hakeem Jefferson spoke with Stanford News Service last week about the challenges of governing amid deep partisanship—and what the country’s current polarization might mean for its political future. “The first party that figures out how to reach across party lines in a substantial way might get to dominance, but I would not bet my monthly salary on that,” Cain said. “In the meantime, the U.S. has to continue to find ways to govern over a fractured landscape and get back to the art of politics and make deals across the divides when we can.”

What we’ve been counting besides ballots.

As COVID-19 cases rise steadily around the country and the globe, Sara Cody, ’85, Santa Clara County’s public health director, spoke with Stanford Medicine’s Scope blog about the trajectory of the pandemic and what we’ve learned from what she calls “an extraordinarily humbling and challenging event.” Says Cody: “We have not invested in public health preparedness or public health infrastructure at all. That’s at every level—federal, state and local. How many public health physicians, public health nurses, community workers and epidemiologists are there in the country? Not that many, as it turns out. Not nearly enough.”

On the vaccine front, Stanford Medicine plans to enroll about 1,000 people as part of a large Phase 3 clinical trial. The trial will test an adenovirus-based vaccine in 60,000 people at approximately 180 sites around the world. Yvonne Maldonado, MD ’81, professor of pediatrics and of epidemiology and population health, told ABC News that Stanford is also engaged in talks about becoming a trial site for other vaccine candidates.

How you gonna do it if you really don’t wanna dance?

By doing jumping jacks. Or boxing. Basically any short burst of exercise is going to improve your mood and defuse your anxiety, as long as you do it for three minutes, psychologist and Graduate School of Business lecturer Kelly McGonigal, PhD ’04, told the New York Times. “Anytime you move your muscles and get your heart rate up, you’ll get a boost in dopamine and sense yourself as alive and engaged.”

Home improvement projects can also help with anxiety. Decluttering and redecorating aren’t frivolous, McGonigal says, they’re ways of imagining a positive future. “Anything you do where you take an action that allows you to connect, whether consciously or not, with this idea that there’s a future you’re moving toward, that’s like a hope intervention. It’s something you’re doing now to look after your future self.”

Here are some penguins. 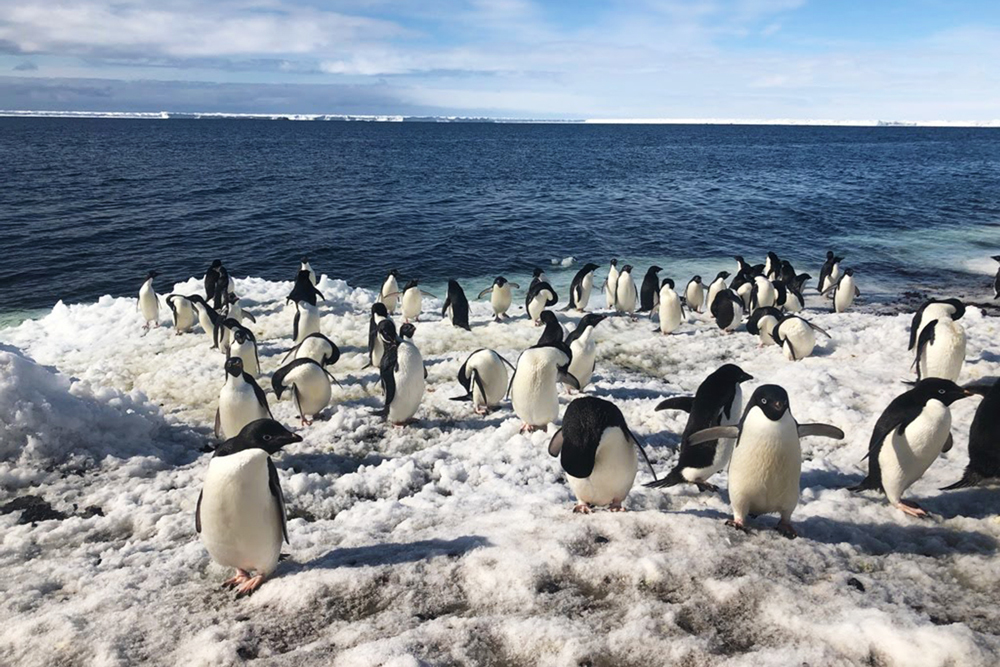 There are roughly a million Adélie penguins in two colonies in Antarctica, which we know thanks to Stanford researchers’ work on a route-planning algorithm that coordinated autonomous drone flight paths in order to efficiently survey the colonies. The system has other potential applications, such as tracking wildfires and assessing grazable vegetation for livestock. But for now, just enjoy these little guys waddling around.

Ever read an amazing edition of the Loop and later realize you can’t remember something in it? Media multitasking could be to blame. Stanford research shows that multitasking while you are trying to absorb information may inhibit your ability to commit things to memory. Plus, scattered attention at the time you need to recall the info (say, when you’re in a Zoom meeting about your newsletter content but have one eye on Pennsylvania—not that the Loop would do such a thing) correlates with more difficulty accessing the relevant memories. One way to improve recall when you need it? Be conscious of where your attention is going, and limit potential distractions. “The things that happen even before you begin remembering are going to affect whether you can actually reactivate a memory that is relevant to your current goal,” Anthony Wagner, PhD ’97, psychology professor and director of the Stanford Memory Lab, told Stanford News Service.

Back in the Before Times, Stanford magazine asked nine Stanford scholars to share their views on American political polarization in a series of essays that are as illuminating today as they were in 2018.

Fire pits, outdoor heaters, ice cream makers—the pandemic is taking retail therapy to another level. “In uncertain times, there’s some comfort people can find in the physicality or realness of items they buy, because everything else can feel uncertain and undetermined. A physical thing can become a tool to help anchor us,” Elias Aboujaoude, MA ’98, MD ’98, clinical professor of psychiatry and behavioral sciences and the director of Stanford’s Impulse Control Disorders Clinic, told the Washington Post.

“I’ll be honest with you: Up until this year, through playing in the WNBA and even during my time as a student at Stanford, I didn’t know what a poll worker truly was. But when I learned, it was a no-brainer for me; I called my boss, asked for the day off, booked a ticket home to Texas and signed up.” WNBA player Chiney Ogwumike, ’14, writes about why she spent November 3 working the polls. Across the country, Stanford students did the same.

“Absentee voting is not what you think of when you’re 16 and getting your first license,” Stanford law professor Nathan Persily, JD ’98, told the Atlantic. But the complex practice of signature matching could mean your ballot is rejected if the signature on the envelope doesn’t match the one on file at the DMV.

After a seven-year bout with a rare and aggressive form of skin cancer, Eric Shaw has been cancer-free for a year thanks to a lifesaving bone marrow transplant from his brother, Stanford football coach David Shaw, ’94.

The people are amazing. There’s a lot of reading to be done. And imposter syndrome is alive and well. Freshman Kyla Figueroa on starting Stanford online.

It Takes a Village