The Erg to Compete

Peter and Dick Dreissigacker, who wanted to row all winter, invented a machine that goes nowhere fast. 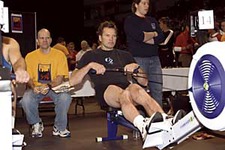 It’s a snowy Saturday in February, and the 2,220 rowers who have gathered for the world championships in Boston know that the Charles River is locked in ice. A heavyweight men’s open race is about to start. Forty-eight rowers sit poised at the catch, ready to row. They’ll do 2,000 meters in less than seven minutes.

These competitors are college rowers, some of them members of the United States and British national teams. A 2,000-meter race is a full-on sprint, nothing held back. After 500 meters, lactic acid is building up in their muscles faster than the blood can carry it away. The rowers begin to gasp in pain. Sweat soaks their shirts and flies from their headbands. At 1,000 meters their faces are set, ferocious. Eyes bulge. Veins stand out like ropes on a dock.

In the last 300 meters, the racers are anaerobic, running on empty—yet they find something more and kick it harder. The winner explodes with a time of 5:46.40. One by one, the others burst to the finish and slump exhausted, forearms on knees, heads sunk, gulping air. One rower, his chest heaving, topples off his seat onto the floor.

Welcome to the world of waterless rowing.

The floor is in the cavernous Agganis Arena at Boston University, site of the 25th annual CRASH-B World Indoor Rowing Championships. Men and women, ages 14 to 85, from 15 countries and six national teams have gathered here to race on stationary machines, Concept2 ergometers.

Peter Dreissigacker, co-founder of Concept2, leans against the arena sideboard, talking with rowing friends he’s known for 30 years. Dreissigacker, ’73, MS ’74, takes in the scene, amazed, as he often is, at what’s grown from the machine he invented with his brother, Dick, MS ’74.

In 1981 Pete and Dick were building competition-grade carbon-fiber oars for competitive crews. Serious rowers themselves, they wanted a way to practice through the long Vermont winters. They nailed the rear wheel of Peter’s bicycle to their barn floor and pulled on the free end of the chain. The pull was heaviest at the start, and accelerated to the finish, just like a rowing stroke. They attached a handle to the chain, built a frame, and added a sliding seat.

No one had ever seen anything like the Concept2 ergometer. It was small enough, if your roommate or spouse were very understanding, to put in your apartment. It was light enough for one determined rower or two reasonable people to carry. Simple and affordable, it let you row all winter.

But what would really capture rowers’ attention was the feature Peter added as an afterthought: a bike speedometer that showed how fast you were going and how far you’d rowed.

You could race on these things.

Named for a measure of work and sounding like the groan its users utter, the erg quickly became essential for rowers, the machine they loved to hate. Workouts on an erg use the same muscles as rowing, and the ability to train regardless of the weather or proximity to water transformed the sport of crew. As rowers coped with the punishing nature of erging, they made it a sport unto itself.

In 1982, the Charles River All-Star Has-Beens (CRASH-B), a group of Olympic and national team rowers, wanted to enliven their winter training doldrums. The Dreissigackers trucked six ergs down from Morrisville, Vt., and the first World Indoor Rowing Championships were held at Harvard’s Newell Boathouse. Winners were awarded claw hammers, an homage to legendary rower and CRASH-B member Tiff Wood, nicknamed The Hammer.

Fast forward to the 2006 competition, where 80 ergs are lined up in rows on the competition floor, and an announcer on a booming PA system calls each event like a horse race. Overhead, on the arena’s giant video display, tiny boats, each representing an erger, crawl across the screen toward the finish. In a junior girls’ race, when the first boat lurches across the video finish, spectators watch the winning contestant: a small high school student who, red-cheeked and tears streaming down her face, crawls off the erg on her hands and knees.

Eric Hamilton, a former U.S. national team member who now serves on CRASH-B’s board, compares rowing and erging: “Rowing is a sport known for its elegance, grace and beauty. Erging strips all of that away, and leaves you with the grit and the pain.”

Confirming this are the 4-foot-tall black trash barrels stationed at frequent intervals around the competition ergs. They were set up by the Emesis Patrol for the needs of competitors who row so hard they throw up. In previous years the patrol used 10-gallon orange buckets from Home Depot.

“It’s seen as an honor to barf after your piece,” Hamilton explains. “It says you’ve left it all on the erg.”

Peter Dreissigacker walks through the arena. The previous afternoon he had helped Concept2 employees assemble ergs, and then wrap duct tape on the rear support bar so the machines would not slip around on the flooring laid over the arena ice. This morning he and Dick had breakfast with the people who put on 20 satellite indoor regattas around the country, and later they’ll meet with North American and international distributors. The success of Concept2 is not something he could have predicted 30 years ago when the brothers operated from a converted bread truck. “We started with such low expectations that just about everything that happened has been a surprise,” he says.

Gaggles of young rowers mill around the practice ergs, joking with teammates, chugging water, using their gym bags as pillows. Renee Camu, 69, white-haired, thin and sinewy, ergs slowly, her eyes focused on the readout. She rows for Team France, and she’s won her division in 2005 and 2006. A blind American rower warms up with her coxswain, who sits behind the erg and calls out her time.

Dreissigacker—6-foot-4 and with a rower’s long reach, broad shoulders and still-flat stomach—finds an empty erg and starts slowly, letting his breathing open, feeling his heart rate come up. Nobody in the warm-up area notices him, or seems aware that he started all this.

Soon enough he lines up on the arena floor with the heavyweight men, ages 50 to 55, sitting ready for the start. He doesn’t expect to win; there are some hard chargers in his competition bracket. His goal is to make his time, hold 6:40. Ten seconds off collegiate time after 30 years, that’s a good morning’s work.

The air horn sounds and the rowers surge into action. After an initial burst, Dreissigacker settles into a long, steady stroke. His meters roll off, but not as quickly as those of the European champion. It doesn’t matter that Dreissigacker has raced on his invention for 25 years: it’s always brutal. At the final stroke he sags, arms limp on his thighs, chest heaving. In a few breaths he raises his head to look at the readout. 6:41.1. A grin lights up his face, and he looks at his wife, Bari, in the stands.

The amazement is how a competition conceived in whimsy, conducted on a simulator, with the potential to induce vomiting, has become a major event. Kurt Somerville, a CRASH-B of such standing that he was voted Commodore for Life, looks out over the striving and pain, and reflects, “You’re sitting on a machine, rowing to exhaustion, going nowhere. Most people understand there’s something deeply nonsensical about the whole enterprise.” The CRASH-B is rowing’s winter party, the reward for all the hours on the erg, a time to connect with old friends. Luanne Mills, who will take home a hammer for lightweight women, says, “I’ve met so many wonderful people from all over the world. I like everything about erging except doing it.”