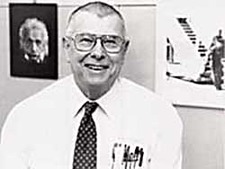 Without Leonard S. Cutler’s work on super-precise atomic clocks, there would be no GPS navigation, modern computer networks would no longer function, and financial transactions would grind to a halt. He proved things theorized by Albert Einstein and built commercial clocks that much of the modern world depends upon. Cutler, ’58, MS ’60, PhD ’66, a long-term employee at Hewlett-Packard and its spin-off Agilent Laboratories, died September 4 after collapsing while camping with his family in Big Basin, Calif. He was 78.

Cutler, born in Los Angeles in 1928, served in the Navy and then attended Stanford for two years before returning to Los Angeles to help his family financially. In 1957, now married, he returned to the Bay Area and finished his degrees.

During a nearly 50-year career, Cutler developed the world’s most accurate commercial timekeeping devices. The most recent, the Hewlett-Packard 5071A cesium clock, introduced in 1992, is accurate within one second in every 1.6 million years. “Len set the standard for world-class research,” says Darlene Solomon, chief technology officer and vice president at Agilent.

Dorothy Cutler describes her husband as “quiet and reserved and gentle”—which probably contributed to a familiar scene at the company: people so in awe of the physicist that they would part to the walls of a hallway as he walked down the middle.

But his most obvious trait was an insatiable curiosity. “He would ask the same question again and again. I told him he was interrogating,” Dorothy Cutler recalls. “I’m analyzing,” her husband would reply.

His other survivors include four sons, Jeff, Greg, MS ’82, PhD ’88, Steve and Scott; his brother, Fred; his sister, Anita Roth, and four grandchildren.

The last time a swim team other than Skip Kenney s won the Pac-10 title, Ronald Reagan was in his first term. This is how it looks inside a dynasty.

Victor Wishna got 60 playwrights to open up for a book of portraits.