Victor Wishna got 60 playwrights to open up for a book of portraits. 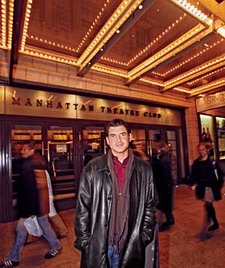 Victor Wishna is a young man, 31, who lives above a sushi joint in Manhattan’s Hell’s Kitchen, in a pin-neat but closet-sized walk-up. You reach it by climbing four flights of dangerously listing stairs. The setup practically screams “struggling writer”—rather than indicating that Wishna, ’97, knows just about every playwright you’ve ever heard of. And that after six years of marathon interviewing, he has distilled their conversations into a handsome book, In Their Company: Portraits of American Playwrights.

Photographer Ken Collins’s haunting black-and-white photographs pair with the intimate, candid, often surprising remarks of 60 playwrights, including the late Wendy Wasserstein and August Wilson. Arranged alphabetically from Edward Albee to Susan Yankowitz, the portraits corral the Pulitzer Prize-, MacArthur “genius grant”- and Tony-winning giants of the American stage. “Here’s the most amazing thing,” Wishna says. “These people were flattered to be included in the book.”

Wishna considers himself a hopeless theater buff, addicted to the excitement of the moment when the curtain rises. He contracted the habit in his quintessentially white-bread hometown of Overland Park, Kan., a suburb of Kansas City. “I’d go to see the high school kids perform—they were, like, my Broadway stars.” A teacher who’d been a New York theater professional solidified his passion. “I knew that even if I weren’t an actor or a playwright, that theater was going to be important to me for the rest of my life.”

Still, when Wishna came to Stanford—“Not to be sappy, but I wasn’t there half an hour before I knew it was the perfect place for me”—he declined to major in drama. “I don’t know what the drama department is like now?” he says, choosing his words carefully. “But back then it struck me as a place where nobody would be interested in a play if it was entirely in English, or lacked full frontal nudity.” He did, however, get involved in the Ram’s Head Theatrical Society and took Anna Deavere Smith’s by-invitation-only playwriting class.

Wishna also wrote for the Stanford Daily. “This was kind of a revelation to me,” he says. “That I could go out and interview somebody and then come home and write their story, and do this on a regular basis—that was a new idea.” Like many aspiring writers before him, he went to New York after graduation, eager to make a living putting words on paper.

Unlike many of those aspirants, Wishna pulled it off. During the next few years, he got several magazine jobs, and from 9 to 5 these days he is senior editor of a society magazine, Quest. (On weekends he leads Jewish-history tours of New York, researches ideas for future books, and manages to squeeze in the occasional stand-up comedy gig.) At one job he met his co-author. Collins had been taking portraits of playwrights, a species that had long attracted him: “Their intelligence, their courage, the magic they can create—it just enchanted me.”

The team of Collins and Wishna had no publisher and no money, but what the pair lacked in logistical support, they made up for in determination. They wrote endless letters, they made endless phone calls. “We were not above stalking,” Wishna confides; if a playwright had a reading someplace, for instance, he and Collins would show up, buttonhole their quarry, and start the pitch.

When young Pulitzer Prize winner Suzan-Lori Parks (Topdog/Underdog) proved elusive, even though she already had been photographed and had promised to sit still for an interview, Collins managed to find out where her mother lived. Then—not to put too fine a point on it—they tattled. Mrs. Parks indicated that her child had been raised to return phone calls. Suzan-Lori Parks got back to them the next day. Her disarming interview is one of the best in the book, full of metaphors and including a discussion of “spells”—silences written into the play that are “moments of emotional transition . . . just as important as the words.”

There was one disappointment—with the famously remote Sam Shepard. Learning where Shepard lived (and scrupulously refusing to tell how he learned that), Wishna faked an “accidental” encounter on the street and handed the playwright/movie star some promotional material about the project. “Shepard was very pleasant, said, ‘Looks interesting—leave it with my doorman,’ and that was the last we heard of him.”

Readers who see In Their Company (Umbrage Editions) will know that the only possible response to this brush-off is, “Your loss, Sam.” Wishna has a knack for thoughtful interviewing. He got Tony Kushner, author of Angels in America, to describe writing as “like trying to build an island in the middle of the lake. You start dropping stones . . . if you have enough stones and you keep dropping them . . . eventually you’ll have a little mound emerging out of the water.” He got John Patrick Shanley (Doubt) to confess that he only writes 30 minutes a day: “I don’t need five great hours. . . . It’s really about the other twenty-three-and-a-half hours that makes that half hour be what it is.” He caught Edward Albee in a waspish mood: “I find most of what I see deplorable. But then again, most art is lousy. Good stuff is rare.”

Wishna, naturally, believes people appreciate the rare good playwriting. He sometimes imagines he might succeed at it himself. “I know—I’m 31 and I haven’t written a play yet,” he says. “But then again, Albee was 29 when he wrote his first play, and George Bernard Shaw was 36. And since 30 is the new 21, I might have some time left.”

JOANN C. GUTIN is a writer in New York.

This Stroller Seat Goes Round and Round