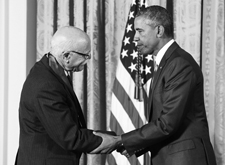 A WIN FOR WIT

The cast of characters in the East Room of the White House was a fuzzie’s dream this fall as English professor Tobias Wolff, MA ’78, lined up alongside fellow writers Annie Dillard, Larry McMurtry and Stephen King for the awarding of the 2014 National Medal of Arts and National Humanities Medal. President Obama bestowed the accolades upon 21 recipients, including Berkeley chef Alice Waters, whose presence, Wolff said, seemed to influence the attention paid to the food at the reception. Wolff was recognized for his writing and teaching. “With wit and compassion,” his official citation read, “Mr. Wolff’s work reflects the truths of our human experience.” Says Wolff: “We (writers) work alone, and any sign that our work is reaching other people—especially if it’s highly regarded by other people—is always a surprise and a welcome one.” Wolff joined the English department in 1997 and took emeritus status this year.

Middle school girls across the country were dreaming big this summer with the help of Girls Driving for a Difference. The team of four recent design school students spent 14 weeks traveling across 30 states in an RV, stopping to run workshops for more than 1,500 girls along the way. Three graduates—Jenna Leonardo, Rachel H. Chung and Natalya Thakur, all ’15—and senior Katie Kirsch created a two-hour workshop to help girls use design thinking to tap into their inner leaders and identify a personal mission for improving the world. One example? Tania, 13, of Maryland, made this her goal: “Bringing together my strengths in design and social boldness, I’m driving for a future where women feel equal to men and comfortable in their own skin.” Leonardo, who founded GDD with Kirsch, said the group’s intent is to help girls seize their leadership potential at a time in their lives when they often lose confidence. 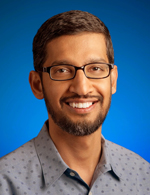 Larry Page, MS ’98, and Sergey Brin, MS ’95, met at Stanford in 1995 and soon began collaborating on the search engine that would become Google. Twenty years later, the duo is handing the reins to another alum, Sundar Pichai, MS ’95, as they take on the duties of running Google’s new parent company, Alphabet. As senior vice president of products, Pichai has overseen consumer offerings such as the Android operating system, the Chrome browser and the Apps business. Google’s founding vision was “to organize a seemingly infinite amount of information on the web,” and, in a blog post, Page said that Pichai remains focused on that goal. “I know he deeply cares that we can continue to make big strides on our core mission to organize the world’s information,” Page wrote.