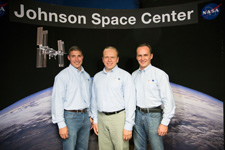 On September 25, astronaut Mike Hopkins, MS '93, far left, and Russian cosmonauts Oleg Kotov and Sergey Ryazanskiy embarked via Soyuz capsule to join their fellow Expedition 37 crewmates already living and working aboard the International Space Station. After two and a half years of training, Hopkins is the first of his nine-member 2009 NASA astronaut class to fly into space. He will serve as a flight engineer for the mission, the goals of which are to install the new Multipurpose Laboratory Module and perform maintenance. Hopkins will remain on the ISS as part of the subsequent Expedition 38 through March 2014. 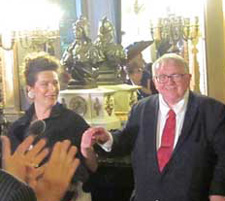 William Byron Webster, '64, MA '68, PhD '72, never imagined when he composed a chamber opera of Hans Christian Andersen's The Little Match Girl nearly 40 years ago that he would see it performed—much less have its world premiere in the City of Light. The work was performed June 20 as part of a four-day festival in Paris's Montparnasse on the Left Bank. An administrative associate in Stanford's department of aeronautics and astronautics, and a tireless advocate for fair housing in East Palo Alto, Webster's first love was music. He hopes to stage additional performances of the opera to benefit nonprofit organizations raising funds for worthy social causes. 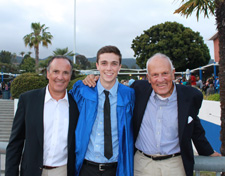 "The spirit that lives here at Stanford opened my mind and gave me so much confidence in myself. This was a cornerstone of my life, and I am very grateful for what I got here."

— King Philippe of Belgium, MA '85, during a visit to the Farm in June. (He assumed the throne in July following the abdication of his father, Albert II.)