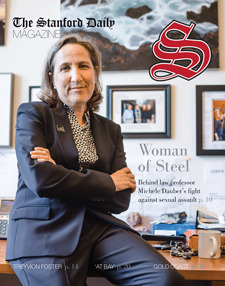 The economic hatchet that keeps falling on U.S. newspapers has taken some skin off the Stanford Daily as well. But at a time when some student papers are operating with a sense of crisis, the Daily is immersed in reinvention and entrepreneurship, backed by hearty support from alumni.

Two notable initiatives got under way last year: the creation of a glossy magazine, which produced its third issue by January this year, and the revival of the Stanford Quad yearbook, previously published by a separate student group but canceled in 2015 because of a lack of staffing. Both ventures are a stab at generating new revenue. But the business goal, notes chief operating officer Andrew Mather, ’16, is closely linked to strategies for editorial change, spurred by an upheaval in reading habits. With more financial security, says Mather, the Daily can “get back to focusing on what journalism wants to be.”

That’s exactly the theme sounded by Tim Marklein, editor in chief of the Daily in 1989-90 and now president of Friends of the Daily, an alumni group whose fundraising efforts have given the paper a vital cushion as it tries to adjust to revolutions in the behavior of advertisers and consumers. Like mass-market papers, the Daily is struggling with the tension between print and digital formats, with the former losing steam and the latter being elusive to monetize. The Friends, says Marklein, have amassed $900,000 in reserve—a rainy day fund that would compensate for a substantial drenching if the Daily’s economic pressures worsened.

But while that gives the Daily a large booster shot of stability, it doesn’t negate the challenge of building a new business model. “What are the needs going forward,” asks Marklein, ’91, “and what additional fund-raising is required? . . . I don’t think it has to be a shrinking business; it can be a thriving business.”

The shrinkage has been significant since Marklein’s era at Stanford. At that time, the annual revenue for the Daily, a nonprofit corporation, was about $1.1 million, enough to put the paper in the black. And as recently as 2002-03, says Mather, “everybody wanted an ad in the Stanford Daily.” Current annual revenue is in the range of $600,000, resulting in a slight deficit. Mather says the entire staff of business and editorial employees and contributors—about 90 to 120 full- or part-timers—gets paid, with amounts varying depending on factors such as the nature of the job or the frequency of a writer’s contributions. There is concern, however, that the compensation is too low to encourage participation or foster a good journalistic experience.

The Friends group, Marklein points out, has offered students a range of assistance since its founding beyond fund-raising, including help with professional internships and other career development. Consideration is now being given to a suite of next-step expenditures, such as how the Daily might rethink its delivery of news by investing in a broader digital presence, including social networks and an expanded mobile app.

Everybody working at the Daily, says Mather, has a host of other interests and diverse skills. If there’s a curse of distraction, he explains, there’s also a blessing of abilities. It enhances the Daily as a journalism “laboratory,” he thinks. “It means we have talented computer scientists, people with business acumen. Ultimately, this can come back and help us.”

General manager Betsy O’Donovan of the University of North Carolina’s student paper, the Daily Tar Heel, made news last summer by detailing the publication’s financial stress—recent annual deficits of more than $200,000 and investment accounts below $400,000. A web story by the Poynter Institute, devoted to journalism education, quoted O’Donovan about the paper’s new solution-oriented focus, but also its sense of exigency: “We have two years to figure our way out.”

That, stresses Mather, is where the Stanford Daily diverges. “The Daily’s facing tough times. We’re not facing an existential threat.”

Should We Lose the Lecture?

An atomic physicist makes the case for active learning.

One More Reason to Love Coffee

What Do We Tell the Kids?

You have a bright child, and you want her to succeed. You should tell her how smart she is, right?