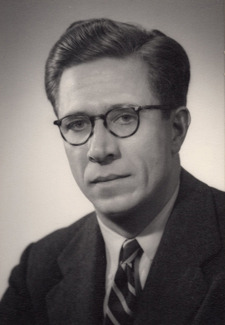 A longtime pacifist and conscientious objector who refused to serve in the military during World War II, and an award-winning professor at Stanford for 37 years, Hubert Marshall was known for his passionate views on human rights and social justice, and for serving as an even-tempered role model for his students and colleagues alike.

Hubert R. Marshall died on December 7 in Mill Valley, Calif. He was 96.

After earning a degree in biology at Antioch College in Yellow Springs, Ohio, in 1947, Marshall married fellow student Rochelle Lubar. Rather than join the military, Marshall chose to work in Civilian Public Service camps helping to preserve national forests.

While studying at Antioch, Marshall had developed a passion for civil rights and served on the race relations committee. Seeing segregation and discrimination in Yellow Springs firsthand inspired Marshall to pursue a doctorate in political science at the University of North Carolina at Chapel Hill. He then taught briefly at the University of Florida and spent a year on the program-planning staff of the U.S. Department of the Interior. In 1953, he accepted an offer to join the faculty at Stanford, where he remained until his retirement in 1990.

Marshall taught a popular class, Major Issues of American Public Policy, and was beloved on campus. According to a 1975 article in the Stanford Daily, as a self-proclaimed liberal and pacifist, Marshall picketed President Lyndon Johnson in 1965, supported George McGovern in 1971 and stood outside the university’s placement center in 1974 to protest military recruiting.

In 1985, Marshall received the Walter J. Gores Award, Stanford’s highest honor for excellence in teaching. In a Stanford News press release, then provost James Rosse commended Marshall for his “inspirational nurturing of generations of Stanford students, in classrooms, residential programs and as an advisor.” Marshall was known around campus for his commitment to social causes and his storytelling and quick wit.

Marshall’s son, Jonathan, said, “Growing up in the household that I did, with both my mother and my father aware of and involved with social justice, influenced my own life choices. While I studied history, I veered off course and became a journalist with an interest in and a commitment to social issues and understanding public policy in the U.S., topics central to my father’s identity. We discussed social justice around the dinner table, and my father and I shared ideas starting when I was quite young. I was fortunate; he was a kind and engaged father and an excellent role model.”

In addition to his wife and son, Marshall is survived by four grandchildren.

One More Reason to Love Coffee

Guts and chance led a teenage immigrant to lab success.