When she was 15 years old, Alexandra Botez won a national chess tournament that could have changed her life. In the palpable silence of a hotel banquet hall in Chicago, she’d dominated all three days of the 2011 Kasparov Chess Foundation All-Girls Championships, famous for its coveted first-place prize: a four-year, full-ride chess scholarship to the University of Texas at Dallas. By the final day, Botez, ’17, was so far ahead of the other 235 players that she didn’t even need to win her last game. She took a comfortable draw and finished undefeated, winning the scholarship.

But while her parents celebrated the prospect of a free college education, Botez, who grew up in British Columbia and Oregon, imagined an unwanted life unfurling in front of her. “It was that moment that I freaked out,” she says. She didn’t want to go to UT Dallas, and, more important, she realized she didn’t want to play chess professionally. She’d loved the game since her father began teaching her when she was 6 years old—a tradition passed down through generations of their Romanian family—and, ultimately, she would become a five-time Canadian National Girls Champion, a three-time Chess Olympiad competitor and one of the top 10 female players in Canada. But historically, only the top 20 or so chess players in the world could make a living at it. Botez sensed that she would never be a world champion. “I’m very much an all-or-nothing person,” Botez says. “I don’t want to compete unless it’s my only goal and the only thing driving me, because if I’m not competing at my best, it’s not worth it.”

Instead, she applied to her dream school, Stanford, on a single-minded quest to be the best at something. Little did she know that a decade later, chess would, in a way, be that thing.

Although today Botez is a women’s chess master, an elite title given to players with a very high skill level, she is nowhere near the top of the sport. Her world ranking, as of early July, was 25,602nd. (For those who speak chess, she has a peak FIDE rating of 2,092.) On the new frontier of chess, however, where grandmasters have Instagram accounts and e-sports teams sign online players like the NFL signs quarterbacks, Botez is a pioneer. She is a chess streamer—a content creator who broadcasts live videos of herself playing. With more than 1 million followers, her channel has broken streaming viewership records for the game and garnered lucrative brand partnerships. Players who outrank her have tried to mimic her success, but in the chess-streaming hierarchy, followers can’t be won with impressive ratings or calculated moves. For Botez, it was forgoing a career as a professional that gave her the time and experience to become a top streamer. With an income that matches those of many top-ranked players, her decision to turn down the chess scholarship has more than paid off.

It’s lonely at the top

By her senior year at Stanford, Botez was balancing a full class load and a venture capital–funded start-up. “Chess has this type of escapism that I really missed, so I wanted to start playing chess again,” she says. She was the president of the Stanford Chess Club but found only one or two worthy opponents. “That’s the thing—she’s so strong comparatively,” says former Stanford classmate and chess grandmaster Daniel Naroditsky, ’19. “Most strong players tend to play online because you have access to a much wider pool of players.” That’s exactly what Botez began doing in her dorm room—playing against strangers on Chess.com. But those one-off games didn’t give her a sense of community, so she joined Twitch, a platform many video gamers use to livestream themselves while viewers chat in real time with the streamer and one another.

Botez would cue up a live game on Chess.com, point a camera at herself, and broadcast both her computer screen and her camera feed on her Twitch channel so that anyone watching could then see her and her online chess board. As she played, Botez would respond to messages that popped up in the chat box. With humility and humor rarely seen in high-level competitors, she attracted a small audience of novice players, who quickly became loyal fans.

Just a few miles south, in Los Altos, the CEO of Chess.com was looking for new talent to diversify his site. Erik Allebest, MBA ’07, had co-founded Chess.com during his final quarter at the Graduate School of Business, and it soon became the largest online chess platform in the world. Today, it boasts 5 million daily users. But as he and his team added exclusive videos and lessons to attract more subscribers, they noticed a problematic pattern. “We’re starting to do more shows, we’re starting to do more content, and everybody who’s involved is a white man,” he remembers. 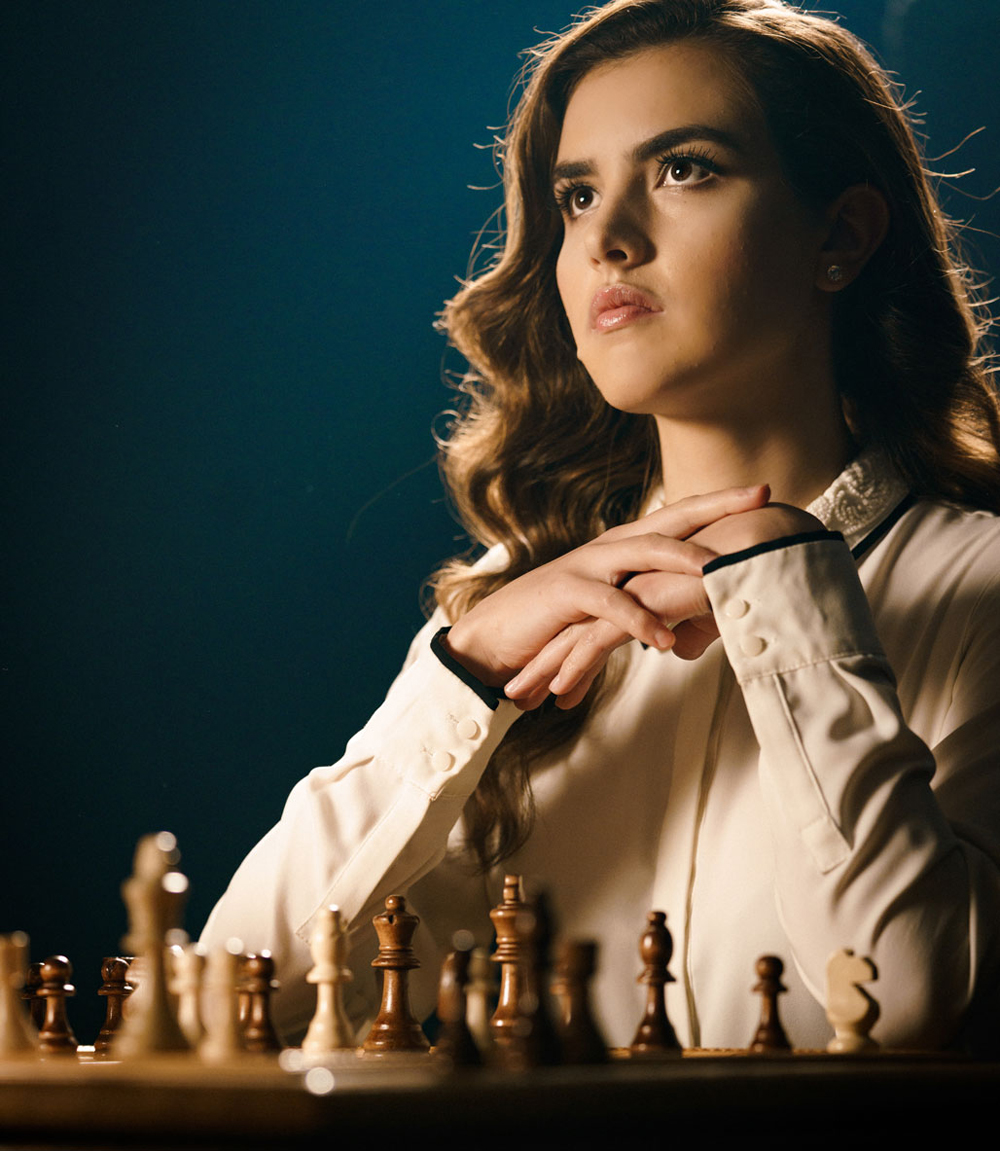 The gender breakdown on Chess.com reflected that of the greater chess community. In the early 2000s, the U.S. Chess Federation (USCF) membership was less than 1 percent female. “Many young girls don’t feel comfortable being so outnumbered by boys,” says Susan Polgar, who, in 1991, became the first woman to advance to chess grandmaster. (As a child, Botez attended Polgar’s all-girls chess camp every year, and last year she was elected as the youngest board member of the Susan Polgar Foundation, which strives to support women in chess. After years of the foundation’s advocacy, USCF membership is now about 15 percent female.)

Hoping to add women to their talent pool, Allebest and his team pulled up lists of the top female players in North and South America. Botez, they saw, was just a few miles away. At the Coupa Café outside Green Library, Allebest invited her to record videos and lessons for Chess.com subscribers. It wasn’t long before she was livestreaming with the site and commentating at tournaments around the country.

“I saw chess as a way to be able to get other opportunities,” Botez says, though she still didn’t see it as a career.

Three years after Botez graduated, her start-up—an AI-based system to help content creators reply to messages—was still struggling to catch on. She and her co-founder shut it down, and she moved to New York to—at last—devote herself to livestreaming on Twitch full time.

“Running a channel is like running a business,” she says. “It’s just that you’re the product as well.” To optimize her viewership, she streamed every night from 5 p.m. to 3 a.m., when there was less competition and therefore a greater chance of gaining viewers. The schedule was lonely and brutal, but she was determined to do whatever it took to become a top streamer. “I wasn’t the best chess player. I wasn’t the best content creator. But I was the best at making content about chess, or one of the best,” she says.

By the summer of 2020, Botez was on camera, live, for about 250 hours per month—an average of 8 hours per day, 7 days per week. To keep her 1 million followers engaged, she constantly experimented with new content, whether it was hustling chess hustlers in New York City’s Union Square Park, traveling around the world to cover the game’s biggest tournaments, adding her younger sister, Andrea, as a streaming cohost, or inviting fans to build a chess board in Minecraft, which broke a viewership record on Twitch. In December 2021, she and her sister were among the first female chess streamers signed to an e-sports team, Team Envy.

“Alexandra does a phenomenal job connecting all of the [social media] nodes,” says Naroditsky, who is also now a chess streamer. Botez has one of the top chess channels on Twitch, as well as a carefully edited YouTube channel, an active Instagram page and a disciplined streaming schedule—a strategic combination that keeps her large audience growing.

‘Fifteen years ago, you would never see a chess broadcast where anyone would laugh—at all. And now the game’s totally changed.’

In the spring of 2021, the best player in the world, reigning world champion Magnus Carlsen, reached out to Botez, offering to collaborate on a livestream. With a large chess board on the left side of the screen and Carlsen’s and Botez’s camera streams on the right, they talked about Carlsen’s childhood approach to chess, traded good-humored trash talk and discussed the game on the board. “What are your thoughts on the McCutcheon, with bishop G5 instead of E5 on move four?” Botez asked at one point, referring to a variation of the French Defense opening. “In general, it’s more fun to play for white than for black,” Carlsen said. For viewers, getting insight from chess stars in real time while rooting the players on in the chat box was the new way to experience chess—and on Botez’s channel, it happened all the time.

Botez’s streaming career parallels a historic rise in the game’s popularity. “The chess world has gone upside down in the last five years,” says Naroditsky. “In the best way.”

The pandemic and the premiere of The Queen’s Gambit on Netflix more than tripled the number of daily active users on Chess.com, while the site’s accessible, playful online content began to transform the elite, exclusive culture that once dominated the game. “Fifteen years ago, you would never see a chess broadcast where anyone would laugh—at all,” says Allebest. “And now the game’s totally changed.”

Sometimes, while thousands of followers watch, Botez makes a tactically bad move and loses a queen. It’s almost always a game-ending oversight. “A lot of players, when they’re strong, they react negatively when they make a mistake,” Naroditsky says. “Alexandra manages to integrate it into the experience. She embraces the mistakes and she laughs about it, and it creates this incredibly positive energy on her stream.” Her fans began calling blundered queens the Botez Gambit, a name that has caught on in the wider chess community.

She takes the joke in stride. When she started her channel back in her Stanford dorm room, Botez wasn’t trying to showcase her skill or the competitive aspects of the game; she was trying to create a community. “It can be a very intimidating game, but here is a situation where it’s actually fun,” she says. “There’s people hanging out, we’re laughing, we’re playing chess, we’re learning. That is what I like most about this game, so I wanted to share it with my audience.”

So in a way, even when she loses, she wins.

When he chose Stanford, Sanjay Saverimuttu assumed he was closing the door on a career in ballet. Life didn’t go as planned.