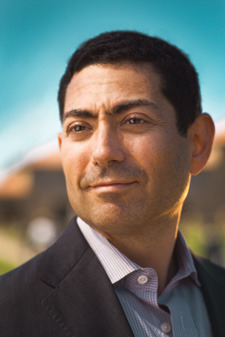 When Tino Cuéllar describes his childhood, the sentences are like brushstrokes. As an eighth-grader, he was a border kid living in Matamoros, Mexico, and going to school in Brownsville, Texas.

"I would take Mexican public transportation through the downtown," he recalls, "through these kind of dusty, narrow streets, through crumbling buildings and Mexican stores early, early in the morning, reach the border crossing and then cross a bridge on foot with my younger brother Maximo." He dropped Max at a Catholic elementary school and hopped a bus to his college preparatory classes at St. Joseph Academy.

That trip told a considerable story—"the physical difference in the cities, the bigger streets, the different people, the street lights actually working"—and he felt the imprint of those stark divisions "day after day after day."

Almost 30 years later, Mariano-Florentino Cuéllar, newly appointed director of Stanford's Freeman Spogli Institute for International Studies, continues to live in a swirl of dualities. Anything with two parts—a border issue, a polarized debate, a twin calling to government service and academia, or the balance between work and family life—seems to engage him now by instinct. Dichotomies make some people chafe; they bring out the intellectual athlete in Cuéllar, MA '96, PhD '01, who received his JD from Yale in 1997 and joined the Law School faculty in 2001.

To explain his research priorities, he begins leaning forward, as if he might continue into a sprinter's crouch. "Citizenship and immigration. Public health. Unconventional national security threats, such as transnational crime and cyber-security. Education policy. And administrative government."

When he continues into specifics—his scrutiny of money laundering or immigration reform or public health measures—the context is how much complexity they entail. That inspires him.

"Really what I've been doing in all my work, you could say, is trying to look at how societies and legal systems and organizations take on problems that are so difficult to solve that nobody can really expect that they're likely to be completely solved—ever.

"For example, will we ever completely be able to know everything about what happens at our border? Everything that happens on the Mexican side and on the American side? Every single package that comes in, every single little particle that flies across the border, every tiny little bit of a potential pathogen that comes across in the food supply? Not likely."

Cuéllar notes that almost all the research he does has benefited from his experiences in "the messiness of the real world" in Washington, D.C. Just 41, he has served in the Clinton and Obama administrations. In the late '90s, he worked as a senior adviser to the undersecretary of the Treasury for enforcement. From early 2009 to mid-2010 he was a member of the White House Domestic Policy Council as special assistant to the president for justice and regulatory policy, having co-chaired the Obama transition team for immigration policy. These jobs were laboratories for mixing ingenuity with pragmatism.

Despite those partisan markers, his political profile is more nuanced. Hoover Institution senior fellow Abraham Sofaer, a legal adviser to the U.S. Department of State during Ronald Reagan's and George H.W. Bush's presidencies, has known Cuéllar for about 15 years and views him as unusually collaborative.

"He's not an idealogue," says Sofaer. "What he's interested in is practical solutions. He and I could serve in the same administration."

And therein seems to lie Cuéllar's root aptitude—a knack for making fruitful connections with almost anyone. If it's partly second nature, it's also something Cuéllar puts effort into. The risk, as brother Max notes, is that it can strike some people as "plastic." For others, it carries an authenticity that stimulates action and decision.

In 2008, the year after Cuéllar received tenure, then dean Larry Kramer named him chair of the Law School's hiring committee. That group's work, says Kramer, is "the most important thing the faculty does." The dean was alert to the youthful professor's people skills, "the ability to talk to anybody."

To Max, there's an obvious link between that ability and his brother's childhood. The cultural and economic disparities that were so vivid in their cross-border lives took hold in Tino, he says, as an "empathy" for all the ways people experience the world.

Cuéllar's interest in education and government crystallized during high school, as did the motivation that got him into Harvard as an undergraduate. After obtaining permanent resident visas, the family had moved from Matamoros-Brownsville to Calexico, a California border city alongside Mexicali, Mexico. Expectations were limited for students at Cuéllar's public high school. Many were children of farmworkers, struggling with English and in danger of dropping out. In general, life was strained.

"I went jogging along the border one day," Cuéllar recalls, "and I was simply stopped by a law enforcement agent, who asked for my papers. I must have been about 16 years old and when I didn't have it on me, I was escorted home and asked to show him papers." It happened in Calexico; it could as well have been Brownsville.

"It was a very common thing to be surrounded by law enforcement," notes Cuéllar. "By people who were simultaneously given the important role of protecting communities and protecting countries, but also could spark fear and concern in that community. So you saw that duality up close, seeing the discretionary nature of what the authorities on the border could do—and not because they were anything other than potentially very good people, but because the enormity of the task before them, and the bureaucratic complexity of it, left them in an almost impossible position sometimes."

Cuéllar says he's still "unpacking" the ways he was affected. As it happens, the bureaucratic complexity of U.S. security policy is the subject of his book, Governing Security: The Hidden Origins of American Security Agencies published earlier this year. But he's clear about the pivotal influence of residing on this side of the border and later becoming a citizen.

"Part of what happened to me when I moved to the U.S. with a green card was that there was a clear sense that even the very imperfect country I was joining was an extraordinary place and was likely to give me truly amazing opportunities, which it did. . . . However badly the world works, it's filled with interesting people who have something constructive to offer and if one makes the connection between them, one learns a lot."

If Washington's "messiness" informs Cuéllar's academic pursuits, it's a two-way street. Back on campus in 2012 as co-director of the Center for International Security and Cooperation, Cuéllar was approached by the United Nations about rethinking refugee settlements worldwide. The result was a project that drew on other divisions of the University and, with a push from Cuéllar, recruited particular help from an unexpected quarter.

As an academic, Cuéllar had written about criminal activity, militarization and violence in refugee encampments. Refugee issues also churned up when he was co-chair of the Obama transition team for immigration policy. The other co-chair, T. Alexander Aleinikoff, went on to a position in the Office of the United Nations High Commissioner for Refugees, sparking the outreach to Cuéllar.

"I recall at the time he specifically mentioned urban planners," notes Cuéllar. But as Cuéllar sought advice on everything from humanitarian aid to technology—deploying what he hails as Stanford and Freeman Spogli's massive "convening power"—he began to reconsider the type of design specialists needed most. Among the concerns that defy conventional planning are inhospitable terrain and segregation from host-country populations.

Cuéllar, an architecture fan, had served on the Law School committee for the design of the William H. Neukom Building, and he recalled talking with some of the architects about their creative process. "I thought it might be interesting to have a very general exploratory conversation with them about whether this was a project that they might be excited to work on."

Jeff Geisinger was an architect at Ennead, the firm that designed Bing Concert Hall and the Neukom Building. He volunteered pro bono, visiting a camp in Rwanda, examining the interaction between refugees and their surrounding communities, and helping to produce visual guidelines for concepts such as shared schools and vocational centers.

Cuéllar went "outside the box," says Geisinger, in teaming professionals who weren't part of the UN establishment. Just as notably, the project put a spotlight on scholarship at its most practical, something Cuéllar sees as part of Freeman Spogli's DNA. That raises the question of whether his future lies in academia or the potential clout and policy initiatives of public office.

His fullest answer is that his time in government gave him a better appreciation of how "special the role of a great university is," particularly in enabling research that takes a long-term perspective. For a more passionate discussion, ask about what cries out to him for solutions. You will hear his distress "about the problem of staggering education inequity, or about poorly administered immigration detention facilities, or about the fact that 450,000 Americans are going to die because of smoking this year."

He cannot say it enough: "The world is as messy and complicated as it is beautiful and full of possibility."

Overcoming the arduous and coping with complications—these have also been personal challenges for Cuéllar. Just as he finished his undergraduate work at Harvard, crisis swamped the family. His mother became severely ill, and his father, who changed jobs often, was working in Mexico. The only option for taking sufficient care of Max was for Tino to become his legal guardian. It could have been for a few months; it ended up shaping their lives for three years, until Max started at Harvard in the fall of 1996.

"He inherited a sophomore in high school who did not have a stellar academic record," says Max. "He was a rock of stability, some of which I only recognized in hindsight. He became a parent."

It was a high-pressure juggling act for the elder sibling. Finances almost always were strained. They went from New Haven, Conn., where Cuéllar started work on his law degree, to Stanford, where he started his PhD, and back to New Haven, with some side trips and improvised arrangements along the way.

Cuéllar says he's proud of helping his brother, but "the whole experience probably made me a different person, too." Among the lessons: Max liked walking together from their New Haven apartment to the nearby high school, but it made his brother antsy, because Tino was anxious to veer off for Yale. Big brother gradually recognized he was getting a bonding opportunity that wouldn't come again.

Perhaps that experience echoes in the way Cuéllar now balances his productivity as a scholar—"immense" is Kramer's assessment—and family life. He's married to Lucy Koh, a U.S. district judge (Northern District of California) and the nation's first district judge of Korean descent. They have two children, daughter Ria, 9, and son Mateo, 6. One evening when they all converged at home around 8:30 sticks in Cuéllar's mind.

"It was awfully close to their bedtime," he says. "But my son said to me, probably reflecting a little bit of his lawyer influence, 'Papi, you signed a treaty that you were going to play Legos with me at least three times a week, and you better pay up and play.' "

They started at 8:45; Mateo didn't get to sleep until after 10. "That's not ideal from a bedtime perspective," says Cuéllar, "but I think that's what it takes to stay sane."

Mike Antonucci is a senior writer at Stanford.

The Art of Engineering Metal