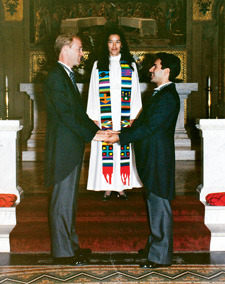 Terry Allen-Rouman, a banker based near Washington, D.C., started his morning meeting on June 26 with a preemptive apology. He was going to be checking his phone—a lot—for any hint of news from the Supreme Court. "I told them I was waiting to find out if my marriage was legal or not."

So began one of the most joyous, if distracted, days in Allen-Rouman's working life, highlighted not only by the restoration of gay marriage in California, where he and husband Jason wed five years earlier, but by the federal recognition of such unions.

The two had no reason to join the burst of engagements flowering on their Facebook feeds. But for a couple in the midst of moving from Virginia, where gay marriage remains prohibited, to the District of Columbia, where suddenly they'd have the full rights of the institution, the shift was profound.

Such a future barely seemed conceivable 20 years ago when Allen-Rouman, MBA '93, and his husband first exchanged vows. In 1993, they made news by merely seeking a commitment ceremony at Memorial Church, something that had never been performed in the chapel of any major university in the United States. 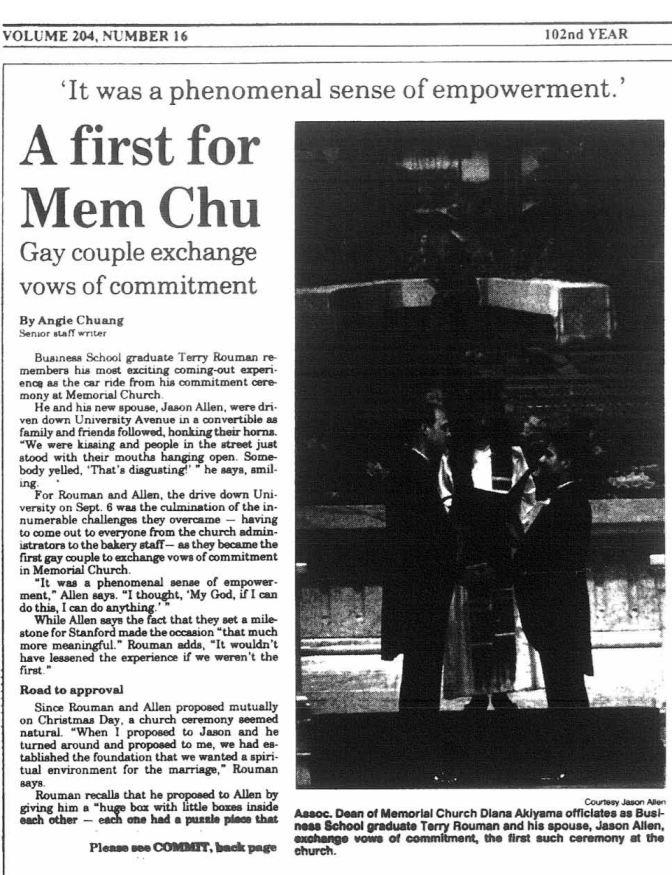 For them, MemChu was a natural choice. Each wanted a religious service that would make clear the seriousness of their undertaking in the most resonant terms to themselves and to friends and family. For those struggling to grasp the relationship, nothing would translate like a service before God.

The tenets of the Roman Catholic and Greek Orthodox faiths, however, made such a celebration impossible in the churches of their families. So they turned to MemChu, only recently reopened after the Loma Prieta earthquake, and to Robert Gregg, dean for religious life, and Diana Akiyama, the assistant dean, both Episcopal priests.

After getting a hesitant response from the first person to answer their call, the men were dubious as they neared their 4:45 p.m. appointment. The stage seemed set for a 15-minute, end-of-day brush-off.

Certainly some in the Episcopal hierarchy would have preferred that Gregg and Akiyama send the pair on their way. The two deans answered to different bishops—one who would oppose the service, the other who declined to endorse it. But even before the men made their request, Akiyama, Gregg and MemChu's two other ministers had reached consensus that such ceremonies were the right thing to do, no matter what other religious or school officials might say. 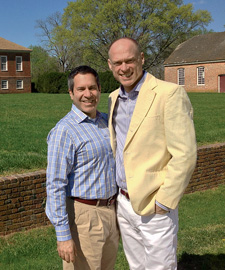 It was only a question of who the first couple would be. After the two clerics talked with Jason and Terry for well over an hour, that too was settled. "I don't think we could have found a better couple for the first ceremony," Akiyama says. "They were so clearly in love and committed to each other."

About 250 people attended the ceremony, which was held on Labor Day, one of the less conventional aspects of the occasion. With familiar readings from Corinthians and the Gospel of Mark, the service bore many of the hallmarks of traditional Christian weddings. But there were also touches reflecting the rarity of the event, including a friend's performance of an operatic solo written by composer Benjamin Britten for his lover at a time when gay relationships were taboo.

It wasn't all like a storybook wedding—Allen-Rouman's father, still coming to terms with his son's sexuality, did not attend, though he called with his blessings. Indeed, it wasn't a wedding at all, the legal right to marry not yet granted to same-sex couples in any part of the United States. As recorded on a friend's video that day, Allen-Rouman said he'd be shocked if gay marriage were legalized in his lifetime.

Even without the sanction of law, that day in Memorial Church was the beginning of the couple's 20-year marriage, Allen-Rouman says. They hardly remember the date of the 2008 ceremony in San Francisco City Hall that made things official, but they will never forget September 6, 1993: "It was the best day of my life. It was such an amazing outpouring of love for us."

Read the full Stanford Daily story referenced in this article.