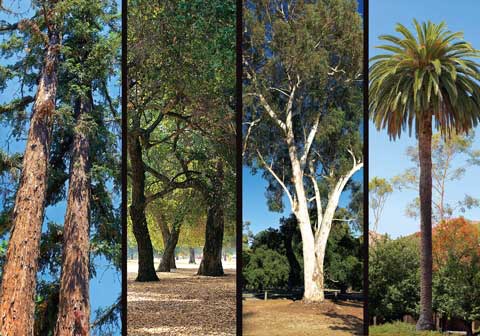 The eucalyptus doesn't belong here, but it has prospered. More than 700 were planted near the Stanfords' home on Governor's Avenue, and many of those trees remain today. Hundreds more reside in the Arboretum.

Originally imported from Australia to San Francisco in the 1850s, eucalyptus—technically Tasmanian Blue Gum—was prized for its fast growth and hard wood. One hundred and thirty-four varieties have been on campus since the University was founded, and in the most recent audit, conducted in 2006, more than 50 species still survived.

The tree is not universally beloved. Michael Burdzinski, the campus tree crew coordinator, notes that eucalyptus has a bad reputation because of its tendency to shed bark and create mess. "We've lost a lot of eucalyptus," he says. "Not everyone cried."

Stately, gnarled and often ancient, oaks are more prominent on campus than any other single species, comprising about 15 percent of all the Farm's trees. They were a particular favorite of Leland Stanford, who decreed that no healthy oak tree be cut down.

Thousands of native California oaks were planted on campus grounds beginning in the 1880s. In 1895, the Pioneer Class adopted what was then a mature oak tree near the intersection of Serra Street and Lasuen Mall. The Pioneer Oak finally succumbed in June 2008.

The University finds ways to recycle the wood from dead oaks. One of the best examples is the large round table in the rotunda of Green Library's Bing Wing, which was constructed from wood harvested from a tree that stood near the Mausoleum. At the time it was removed in 1993 because of disease, it was estimated to be 300 years old and 70 feet tall.

At the time Stanford was being built, dense redwood forests blanketed a mile-wide swath of California coast stretching from Monterey to Humboldt. Most of the trees on campus are young by redwood standards (the species can live well over 1,000 years). One cluster of five planted off Serra Mall, the largest of which has a circumference of 15 feet, bears a plaque reading: "These redwoods were planted in 1915 by Stanford botany professor and pioneer American plant physiologist George J. Peirce, faculty member from 1897 to 1933. In accordance with Professor Peirce's intention, the University named these natural monuments 'Stanford Palos Altos.' They symbolize Stanford's strength, independence, and enduring quality." El Palo Alto, the namesake of Leland Stanford's Stock Farm and, later, the city that grew beside the University, resides just off campus on the bank of San Francisquito Creek. Rising 110 feet, with a 24-foot circumference, the imposing redwood was 836 years old when the Declaration of Independence was signed in 1776. It's no wonder that the Stanfords chose its likeness to represent all that they hoped the University would be. The first official seal adopted by the Board of Trustees in 1908 bore an image of El Palo Alto (as has every seal since) with the words "Semper Virens"—always verdant.

Beloved by many, Stanford's iconic palm trees have also been the subjects of perennial rumors, some apocryphal. The parallel columns greeting visitors along Palm Drive were planted in 1893, before the road was paved. Writing to Leland Stanford in 1886, landscape architect Frederick Law Olmsted advocated a Mediterranean style for the campus: "If we are to look for types of buildings and arrangements suitable to the climate of California, it will rather be in those founded by the wiser men of Syria, Greece, Italy and Spain." But it apparently was University President David Starr Jordan who sold the Governor on the trees. In his 1891 Opening Day address he remarked: "These long corridors with their stately pillars, these circles of waving palms, will have their part in the students' training as surely as the chemical laboratory or seminary room."

Owing to the trees' prominence and stature, it has on occasion been suggested that the ratio of students to palm trees at Stanford is on the order of 4 to 1. In reality, there are only about 600 Canary Palms, which make up two-thirds of all palm species on campus. Two of the oldest specimens, planted in 1889 as 3-foot-tall seedlings, can be found on the Inner Quad next to Memorial Church. Part of the palms' appeal is that they're fairly low maintenance, requiring pruning of their feather-like fronds only once a year and consuming less water than other species. And when the towering trees do have to be replaced, they are frequently donated or rescued from local neighborhoods, as was a pair of 50-foot specimens transplanted from 532 Channing Avenue to fill gaps along Palm Drive in 1981.

Girth, in feet, of largest recorded eucalyptus on campus: 26

Greta Lorge, '97, is a freelance writer and editor in San Francisco.