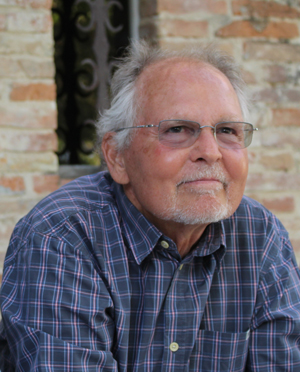 When Jim Kauffman arrived at Stanford in 1967 as a slender frosh athlete, he had the distinction of playing competitively in three sports: football, basketball, and track and field. The San Mateo Times the next year reported a musing comment from Stanford’s “publicity man”: “I’ve been thinking about this kid Kauffman, and I think he’s the greatest all-round athlete at Stanford in 37 or 38 years.”

The Palo Alto-born athlete earned most valuable player for the frosh football and track teams, a Stanford first, and he added a fourth sport, rugby. He had his own style—without bravado and tuned into the outside world. He encouraged his fellow athletes to take part in the protests on campus against the Vietnam War. And he was a steadying influence as a defensive lineman on the team responsible for the memorable 1970 victory over USC.

The next year they won Stanford’s first Rose Bowl since 1951, setting Stanford football on a new trajectory. “He was considered the inspiration,” says classmate Phil Satre, ’71. “When things were looking dim, he was capable of motivating everyone.”

Kauffman met his wife, Priscilla, ’71, in high school, and she joined him in Australia after he spent a year there playing rugby. For 18 months, they traveled through Southeast Asia and Nepal. Back on the Peninsula, Kauffman spent 10 years running Italian restaurants for Spectrum Foods and opened MacArthur Park in Palo Alto.

In 1990, the family moved to Florence and stayed. As assistant director for housing and student life at Syracuse University’s program in Florence, he taught journal writing and placed every student in a home stay with an Italian family.

“Students often resist the idea of living under someone else’s roof again,” he wrote, but “I’m convinced that in 10 years, students will more easily recall the food prepared by their Italian host families than the significance of Masaccio’s frescoes in the Brancacci Chapel.”

He was predeceased by his brother, Dave, ’66, a Stanford basketball player. He leaves his wife of 43 years; son Casey, ’00; daughter Clara, ’03; and three grandchildren.