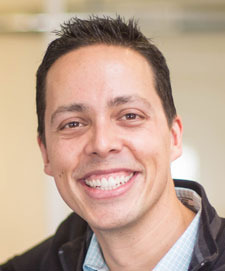 Brian Andrés Helmick, MBA ’05, was born in Colombia, where he says the most important thing—besides knowing how to dance—is loving fútbol. In San Francisco, he felt keenly the lack of a pro soccer team. “This global city,” he recalled thinking, “doesn’t have the world’s sport.” That’s why, after selling his HR software company Algentis in 2014, he formed the North American Soccer League’s first West Coast team: the San Francisco Deltas, named after the mathematical symbol for change. The Deltas will take the pitch in spring 2017 at Kezar Stadium, the original home of the San Francisco 49ers, under head coach Marc Dos Santos, NASL’s 2015 coach of the year; the search for players is in full swing. In the meantime, the Deltas organization (which includes 14 other Stanford alumni) is ratcheting up public support by hosting happy hours, leading marches through the city and staging monthly “bubble soccer” games, in which each player is encased from the waist up in a giant plastic bubble. For Helmick, the team’s CEO, listening to fan feedback takes precedence. “God gave us two ears and one mouth for a reason,” he says, “because we should listen twice as much as we talk.” Tickets are selling fast, but Helmick says they’ll donate 200 per game to local schools and nonprofits.

A Brief History of Faith

Campus religious life is more diverse than ever.