So, What's Your Mile Time?

By the standards of mere mortals, Grant Fisher’s time in the 5,000 meters at the NCAA championships this June sounds otherworldly. Certainly anyone who runs 3.1 miles in 14 minutes and 35 seconds is going to crush the local turkey trot.

But by elite standards, Fisher’s performance was more tortoise than hare. Even with his furious final lap, his time was more than a full minute slower than his personal best. So how is it he claimed the 2017 national outdoor track championship — the first Stanford man in five years to do so?

It turns out speed isn’t everything in distance racing. Fisher, now a junior, talked to Stanford about that paradox, the physicality of the pack and how soccer made him a better runner. 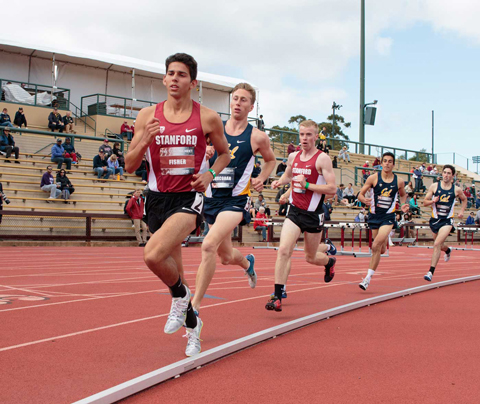 “The thing about running, and I didn’t understand this until I was racing for a while, is that the fastest person rarely wins the race,” Fisher says. Rather, tactics trump. While the speediest runner may crave a fast race, it’s mentally and physically exhausting to carry the pressure of leading. And so runners often end up battling for prime position in the pack while trying to avoid getting boxed in. In the NCAA final, the group remained at a relative crawl until the final lap, when Fisher exploded with a triumphant kick. “I wasn’t the fastest person in that race on paper by any stretch.”

Running outside the box

Especially in slow, tactical races, the fight for position in the bunched-in pack becomes crucial. Fisher’s legs are peppered with small scars from shoves to the back that pushed him into spikes ahead. “If you’re in a good spot and the guy next to you wants your spot, they’ll give you a few elbows and try to get it,” he says. “And you have to either stand your ground and fight back or decide not to waste your energy and let them have it. I’m fine taking elbows and giving elbows.”

As a boy, Fisher’s first love was soccer, where his biggest edge was stamina. He’d end a game virtually as fresh as when he started. Running began as a way to hone that advantage, but by the middle of high school, the supplement had become the main event. His days as a playmaker in center midfield still help him see and anticipate the pack’s movements.

Fisher is also deadly in the 1,500 meters, winning the Pac-12 title this year. But the popularity of 5Ks means his 5,000-meter success is far more relatable for many people. He’s an elite miler too. In 2015, he became the seventh high schooler in U.S. history to run a sub-4-minute mile, squeaking through in 3:59.38. It was, he says, the one race in which he really did care about time.

One down, one to go

Fisher came to Stanford with two main athletic goals: an individual title and a team title. With the first box checked sooner than he’d expected, his eyes turn to the second goal this fall with cross-country. “We have a really good group of young guys. I think we can put something together.”

How my wife and I shake it off in a kitchen across the pond.