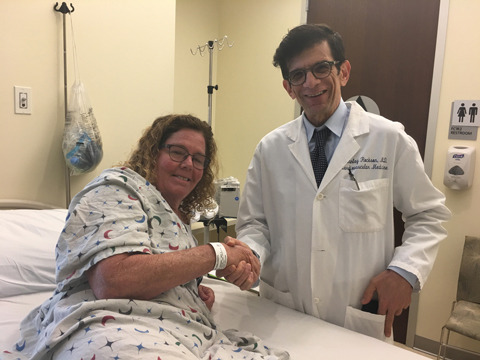 Cheryl Erpelding named her blog lymphedemasucks.com, which sums up her experience since being diagnosed with the painful condition six years ago. After she had a hysterectomy to treat endometrial cancer, first her right leg and then her left leg filled with fluid; the skin thickened and bulged. “It disfigures you,” she says, describing her life after diagnosis as “a living hell.” But a study released in May by Stanford scientists Stanley Rockson and Mark Nicolls identifies, for the first time, the molecular cause of lymphedema and a potential drug treatment for the 59-year-old businesswoman and the estimated 10 million other Americans who have the condition.

The findings are the culmination of only four years of work. “Scientists are used to spending decades trying to fit one jigsaw piece into the puzzle,” says Rockson, a professor of cardiovascular medicine. “It is extraordinarily rare to work in the lab and be able to bring it right back to the patient.”

He and Nicolls, MD ’93, a professor of pulmonary and critical care medicine, joined forces after Kevin Grimes, an associate professor of chemical and systems biology, realized the two were studying similar pathways in vascular tissue but in different diseases (Nicolls in pulmonary hypertension and Rockson in lymphedema). Grimes, who co-directs the SPARK program to bring medical discoveries to the clinic, “blind-dated us,” Nicolls says.

The researchers identified a common culprit in both diseases: a naturally occurring inflammatory substance called leukotriene B4. The buildup of lymph fluid in lymphedema is actually an inflammatory response in skin tissue, they say, not merely a plumbing problem, as previously thought.

The scientists were able to reverse symptoms of lymphedema in mice with the drug bestatin, which has been used for decades in Japan as a cancer treatment. A clinical trial is now under way in humans.

Erpelding just joined the trial, which is testing bestatin on lymphedema caused by surgery, radiation therapy, trauma or infection. (The research also pertains to the hereditary form of the disease.) “I’m feeling excited that I could be getting the drug,” she says. “I am on a mission to get better.”

Roundworms Live Longer on the Mediterranean Diet. Will People?

Plump worms that store monounsaturated fats in their guts fare better than their more svelte counterparts.