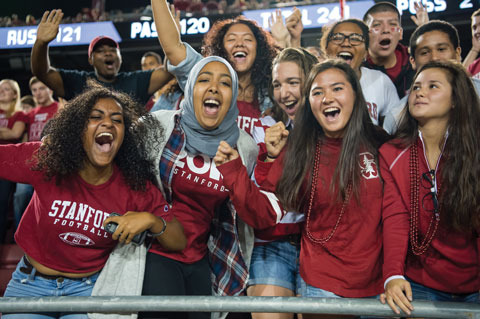 Shortly before school started this fall, a Stanford football advertisement on Facebook set off some remarkable internet diatribes. The photograph of students cheering excitedly for the team depicts mostly women of color, and one wearing a hijab. Negative commenters wrote lines like: “You had to throw a Muslim in there, didn’t you  . . . Disgusting. . . . Screw Stanford.”

Tesay Yusuf, ’18, the Muslim student pictured, posted the comments on her own Twitter feed, eliciting more than 10,000 retweets and an outpouring of support. “I’ll cheer with you at any game, Tesay,” one woman wrote.

Media outlets around the country picked up the kerfuffle, and Yusuf seized the opportunity to spread a constructive message. “I see people who look like me, any combination of Black, Muslim and Woman, bashed on the internet consistently,” she wrote to Stanford. “It’s time that we realize how desensitized we’ve become to these types of things and realize that what happens in politics truly affects our daily lives.”

Yusuf said Stanford Athletics, administrators and friends from all over campus reached out to make sure she was OK. “I’m really grateful to be a part of the Stanford community.”