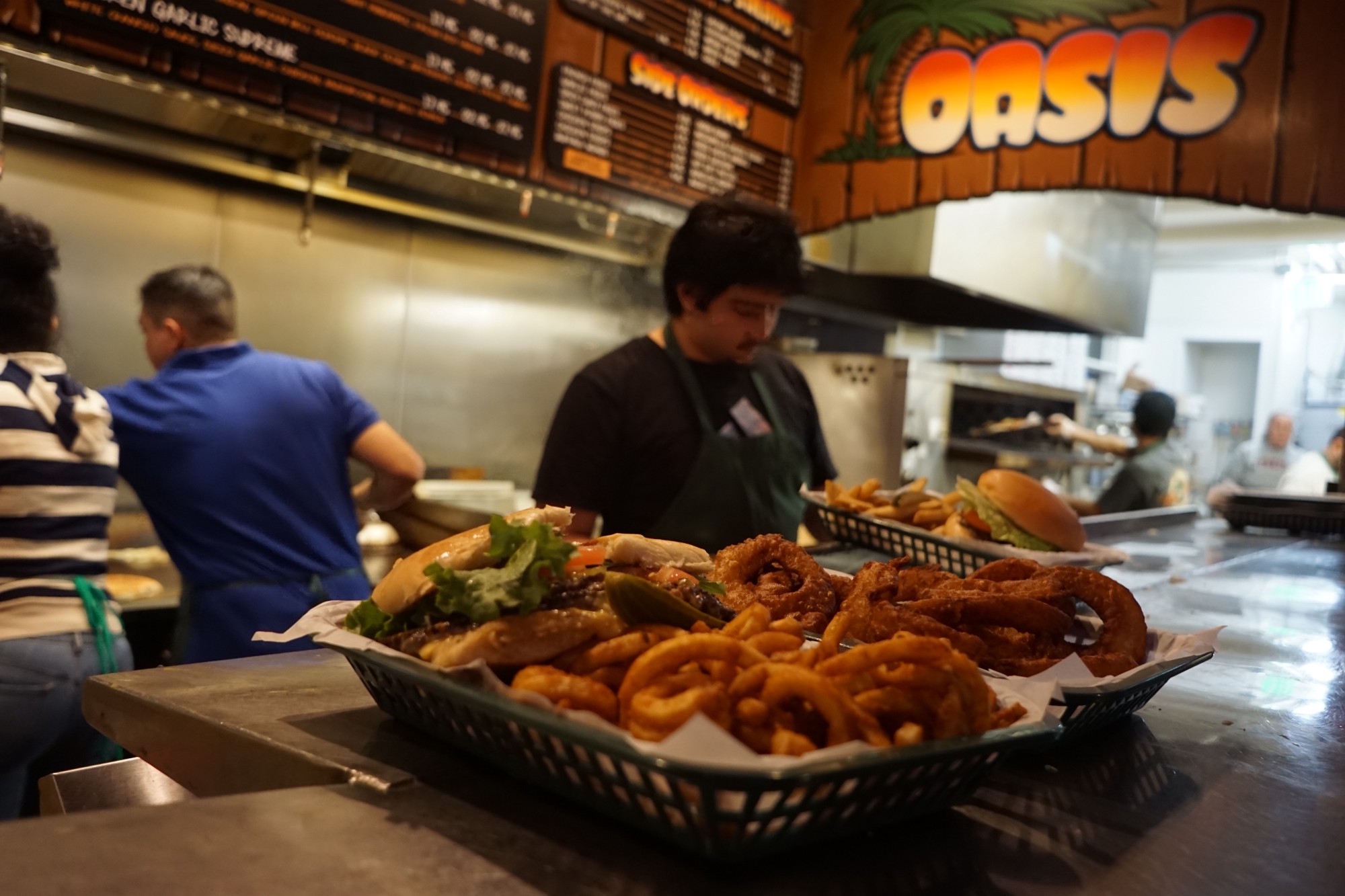 I was a junior at Stanford the first time I went to the Oasis Beer Garden, aka the “O.” At 20, I couldn’t yet legally order a beer. That is, unless I borrowed someone else’s ID, which is exactly what I did on my initial trip to the beloved Menlo Park dive bar.

With Hilary Hart’s Oregon driver’s license in hand (it didn’t have a photo, so was a perfect foil), I walked in trying to exude confidence and casually ordered a beer on tap. When the bartender asked for my ID, I stood on tiptoe (Hilary is a good three inches taller than I) and handed it over.

“Lemme see your signature,” the bartender barked, sliding a piece of paper and pen in front of me and holding the license out of sight.

I hadn’t anticipated this development and wasn’t even sure how Hilary spelled her name. (One L? Two?)

I scribbled what I thought might be a good signature and slid it back to the bartender. He poured me my beer. 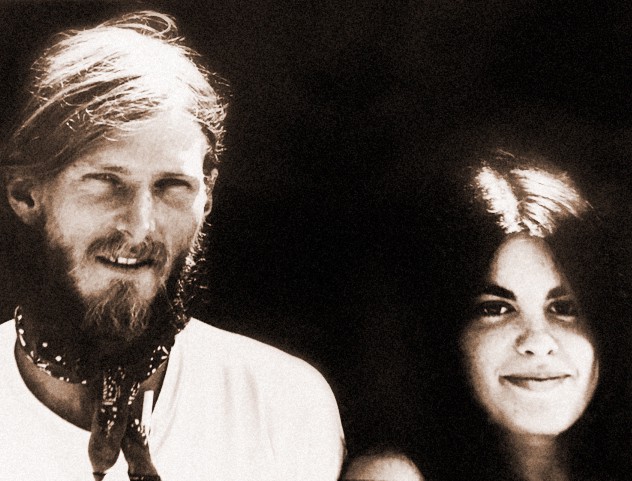 That was 1973. On March 7 of this year, the Oasis, situated just north of campus, closed its doors after 60 years of serving the community and Stanford students with (mostly) authentic IDs.

The closing is especially poignant for me because the O was where my then crush and now husband and I went on our first date back when I was a student and he was a recent grad. How many other Stanford couples got their start in the dingy light of a booth at the Oasis? Quite a few, I imagine.

According to the Oasis’s published history, the site at 241 El Camino Real was converted in 1932 from a YMCA facility for Camp Fremont during World War I by Alexander Beltramo. The Beltramos began leasing it to the Tougas family in February 1958. It is one of the oldest restaurants in Menlo Park. The closing came about because current landlords Dan, ’59, and Margaret Beltramo weren’t able to come to a lease agreement with the O’s owner, Jamie Tougas.

“It represented a common experience for we Stanford-ites of so many varying vintages,” wrote frequent customer Donald King, ’86, in an email to me. “As Silicon Valley has become more and more outrageously expensive, there are fewer and fewer of those places that create a shared experience across the years. We’re about to lose yet another one. I am all for progress, but it feels like the area is changing in an irreparable way.”

How many other Stanford couples got their start in the dingy light of a booth at the Oasis?

Soon after the announcement that the restaurant was closing, droves of fans streamed in, revisiting the place where so many memories were made. They filled Facebook with posts about their attachment to the peanut shells littering the floor and the wood tables carved with three generations of initials.

“Damn!” wrote Christopher Longstreet Colvin on the Stanford Alumni Association’s Facebook page. “I walked in there so many times, and crawled out.”

“Why are we just accepting this?” asked Lindol French. “Think of all the achievements of the last 60 years of Stanford grads . . . can’t we add ‘saving the Oasis’ to that list?”

In fact, locals are trying to save the O. A petition to the owners entitled, “Don’t let the O go!” garnered more than 16,000 signatures. The Oasis could reopen with the same menu and furniture under a new owner, if someone steps up and an agreement can be made in the coming weeks. Menlo Park Mayor Pro Tem Ray Mueller, who has been trying to facilitate a deal, says he is “cautiously optimistic.”

For now, though, the doors have been locked. 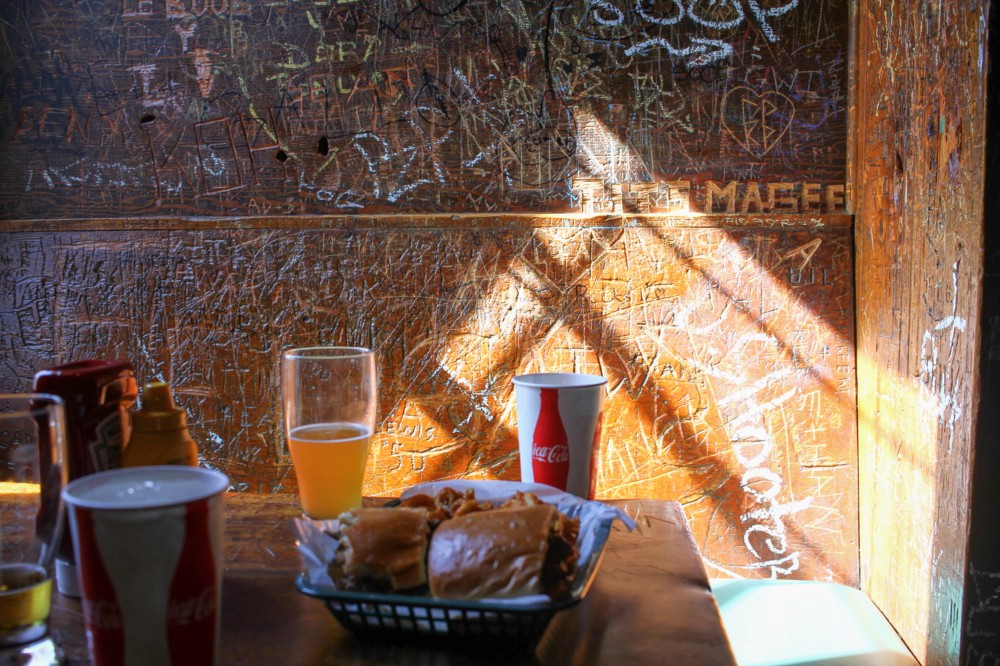 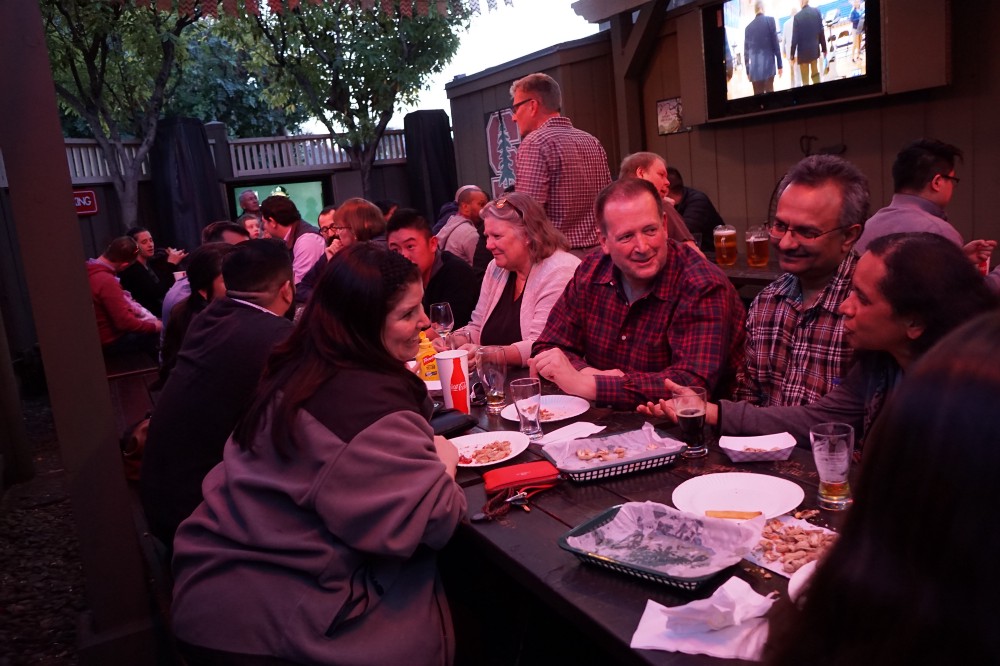 Carving initials on the booth, above, was a revered tradition. The patio was full on the restaurant’s final nights. (Photo: Dilys Ong, top; Eli Goodman, '21, bottom)

My hubby and I wanted one last fix. We headed over on the next to last night of operation, March 6. The Oasis was jam-packed. Customers had to park far away and walk from the neighborhood. They crammed into booths, crowded the back patio and bumped elbows in the standing-room-only space. Desperate patrons ordered so many of the “world famous burgers & pizza” that the chefs ran out of beef at one point.

It was a bittersweet evening. We reminisced about Chip’s scruffy beard and ponytail (my parents were apoplectic) and my chutzpah for pretending to be my 5’8” housemate from Oregon. We felt young, but we also felt old. A piece of our Stanford days is now history.

The remains of the day:

Dutch Goose, another Menlo Park mainstay, opened in 1966 and is famous for its gourmet deviled eggs.

Antonio’s Nut House: A classic dive bar complete with pool tables in the back and obligatory peanut shells on the floor, the Nut House hasn’t changed much even as Palo Alto has. Owner Tony Montooth, who ran the place for more than 40 years, died last spring, but the Nut House lives on.